Baghdad service honors two soldiers who had been missing since 2007 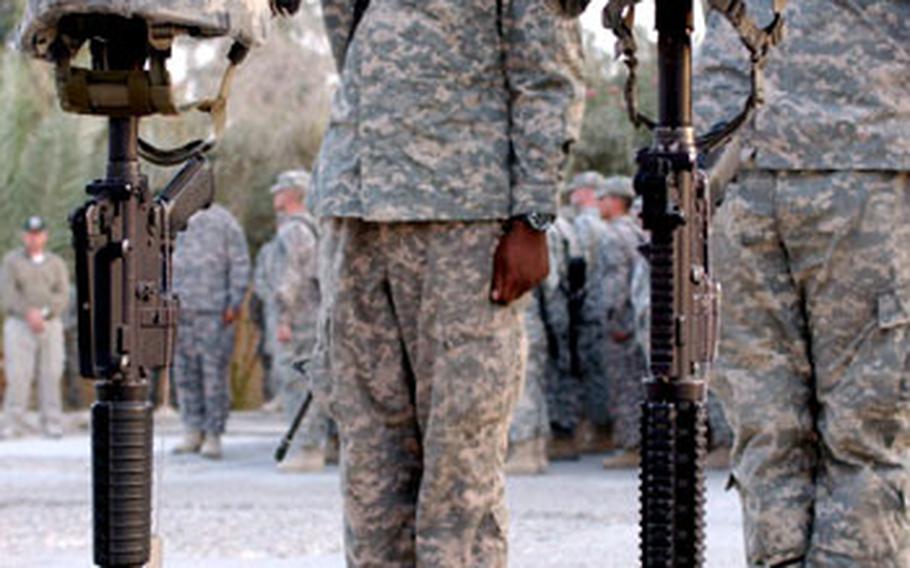 Soldiers in Baghdad held a memorial service to honor two soldiers whose bodies were recovered last week after being listed as missing for more than a year.

Troops assigned to Multi-National Division-Center, the command under which the two missing soldiers served in their last Iraq tour, honored the two soldiers with the traditional memorial of boots and helmets at Camp Victory.

Staff Sgt. Alex Jimenez, 25, of Waterford, Mich., and Spc. Byron Fouty, 19, of Lawrence, Mass., were among three soldiers who went missing after an attack south of Baghdad in May of 2007. They were promoted from the ranks they held when captured.

Pvt. Joseph Anzack Jr., 20, of Torrance, Calif., was found in the Euphrates River 11 days after the attack.

The soldiers were all part of the 10th Mountain Division, which is now the U.S. unit in charge of MND-C.

The parents of Fouty and Jimenez were notified the night of July 10 by the military that their sons&#8217; remains had been recovered.

An Iraqi soldier and four other Americans were killed in the ambush, which hit Company D, 4th Battalion, 31st Infantry Regiment.