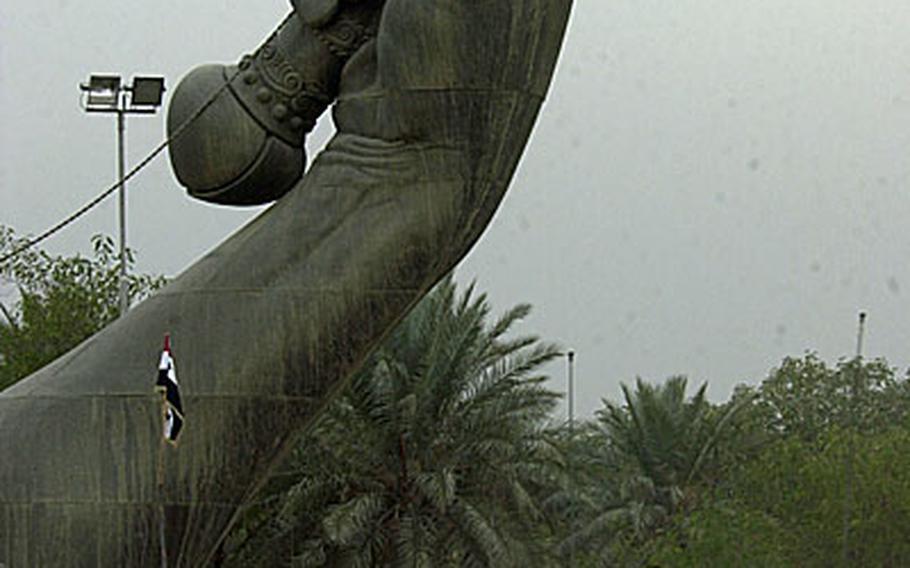 U.S. soldiers drive past the so-called "Hands of Victory" monument in downtown Baghdad in December 2004. According to news reports, Iraqi officials have begun dismantling the structure, which was commissioned by Saddam Hussein as a memorial for the Iraq-Iran war of the 1980s. (Joseph Giordono / S&S)

U.S. soldiers drive past the so-called "Hands of Victory" monument in downtown Baghdad in December 2004. According to news reports, Iraqi officials have begun dismantling the structure, which was commissioned by Saddam Hussein as a memorial for the Iraq-Iran war of the 1980s. (Joseph Giordono / S&S) 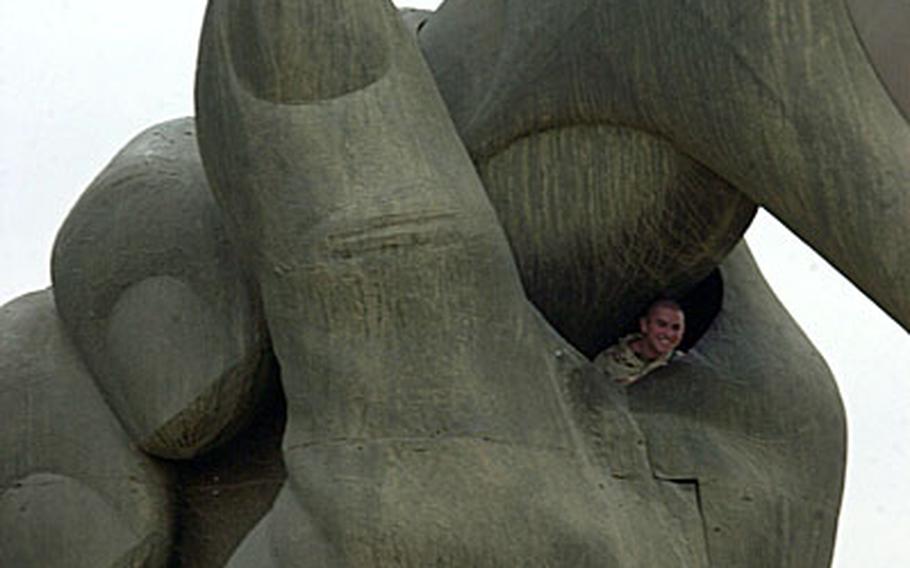 A U.S. soldier poses for photos inside the so-called "Hands of Victory" monument in downtown Baghdad during a brief stop there in December 2004. The monument, one of the most visible of Iraq&#39;s monuments and long a popular "tourist" spot for troops in the Green Zone, is being dismantled by the Iraqi government. (Joseph Giordono / S&S)

The Iraqi government has begun dismantling the outsized &#8220;Hands of Victory&#8221; monument in downtown Baghdad&#8217;s Green Zone, erasing one of the most visible remnants of Saddam Hussein&#8217;s former regime and sparking concerns that the move will further inflame sectarian conflict.

According to news accounts published Wednesday, no official government announcement has been made, but construction crews and equipment were at the site Tuesday beginning to tear it apart. Numerous Iraqi bystanders and coalition troops were seen taking bits of the monument away as souvenirs, the reports said.

Newsweek magazine&#8217;s Web site carried a story saying 10-foot chunks had been cut out of the bronze monument, which was commissioned by Saddam to mark &#8220;victory&#8221; in the Iran-Iraq war of the 1980s. Bright orange construction cranes also were at the site.

&#8220;I was very shocked when I heard they started destroying it,&#8221; Mustafa Khadimi, director of the Iraq Memory Foundation, which documents the atrocities of Saddam&#8217;s regime, was quoted as telling Newsweek.

Khadimi said the decision was made last week by Prime Minister Nouri al-Maliki and a government organization called the Committee for Removing Symbols of the Saddam Era.

The dismantling of the monument could further deepen the rift between Iraq&#8217;s Shiite majority and its Sunni minority, which Saddam favored during his rule. Maliki&#8217;s government is Shiite-led and elements of it have been accused of complicity with Shiite death squads.

Government officials said the razing of the monument could be completed by the end of the week.

Since the fall of Baghdad in 2003, the edifice has become a major tourist attraction of sorts in the Green Zone.

Thousands of coalition troops, embassy workers, contractors and other Green Zone denizens have stopped by to take pictures &#8212; some even climbing up a narrow ladder and poking their torso from a hollow area of a fist.

There are actually two sets of hands and crossed swords reaching 140 feet high, flanking the entrance to a parade ground.

The 24-ton swords were made from the melted-down and recast guns of dead Iraqi soldiers and some 5,000 captured Iranian helmets adorn various parts of the monument. The hands that hold the swords reportedly are direct replicas of Saddam&#8217;s own hands, and the German firm that built the monument has said the arms were modeled from a photograph provided of Saddam&#8217;s forearms.

On the day the monument was inaugurated in 1990, Saddam rode under them astride a white horse, an allusion to the slain Shiite martyr Hussein, killed in Karbala in A.D. 680. The martyr Hussein&#8217;s death caused the rift between Shiite and Sunni Muslims.