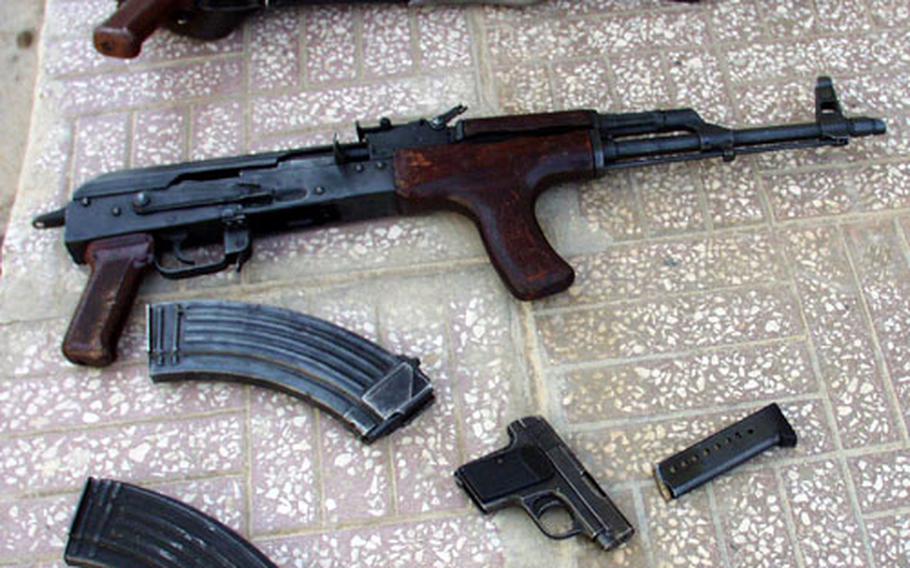 A few of the weapons confiscated Saturday by 3rd Infantry Division soldiers during traffic stops in Baghdad. (Marni McEntee / S&S)

A few of the weapons confiscated Saturday by 3rd Infantry Division soldiers during traffic stops in Baghdad. (Marni McEntee / S&S) 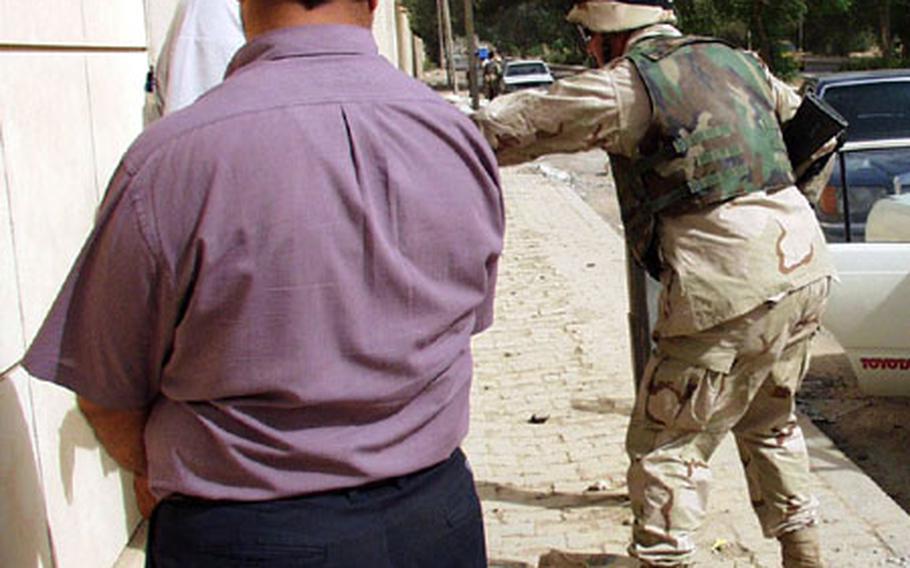 BAGHDAD, Iraq &#8212; It was a routine day in Baghdad on Saturday for the soldiers of Company C, 3rd Battalion, 69th Armor Regiment.

Within 90 minutes of setting up a traffic checkpoint on a sweltering street in the east part of the city, the 3rd Infantry Division troops had seized 20 weapons, including three AK-47 assault rifles, three revolvers and two 9 mm pistols, said Staff Sgt. Richard Rosado.

Indeed, illegal weapons are one of the biggest obstacles U.S. troops face in their effort to keep a lid on violent and petty crime in Baghdad, home to more than 6 million people.

Add to that the lack of a local police force, rampant unemployment and lack of basic services, and the tendency toward lawlessness becomes more understandable, a V Corps intelligence officer said Saturday.

In the past two weeks, an increasing number of incidents, including the shooting deaths of two American soldiers, has made security the top concern for Baghdad residents, as well as a number of U.S. senators who fear the city may spiral out of control.

The same goes for the troops. A sample of the daily reports of criminal activity provides a glimpse of what U.S. soldiers face:

&#8226; On Thursday, a 204th Military Police Company unit on daytime patrol shot one Iraqi and detained another after the two Iraqi men shot at troops when the soldiers interrupted a carjacking. No soldiers were injured.

&#8226; The same night, MPs from the same company shot two Iraqis to death and wounded another after the suspects fired on the MPs from the back of a taxi in downtown Baghdad.

Last Tuesday night, someone dropped grenades from a bridge as an MP patrol passed underneath. The soldiers were not seriously injured.

The steady criminal activity has prompted the Heidelberg, Germany-based V Corps, which is in charge of 40,000 soldiers in Baghdad, to nearly double the number of MPs in the city.

In addition, after 1st Armored Division troops arrive to replace the 3rd Infantry Division, a swap that is expected to be complete by June, one 3rd ID brigade will likely be left behind for at least a month.

Last week, V Corps Commander Lt. Gen. William S. Wallace said the decision to keep any of the Fort Stewart, Ga.-based troops behind was being discussed &#8220;in order to stabilize the security situation in Baghdad.&#8221;

In the meantime, efforts are under way to re-establish a local police force that, one day, will be able to take over the police mission.

Before the war, Baghdad was secured with an iron fist by roughly 20,000 police officers and an additional 20,000 to 30,000 Iraqi soldiers, said the V Corps intelligence officer, who spoke on condition of anonymity.

Their disappearance from the streets of Baghdad has left a huge security vacuum, he said.

As of Saturday, some 7,000 Iraqi policemen were ready to go back to work, the Army reported. However, a recent 3rd ID briefing indicated that only 400 of them had been patrolling the streets jointly with American soldiers.

Most of the police don&#8217;t have guns, though the Army is working to provide them with weapons.

Part of the problem in getting police on the streets, the intelligence officer said, is that the police themselves are leery of confronting a population that is armed to the teeth.