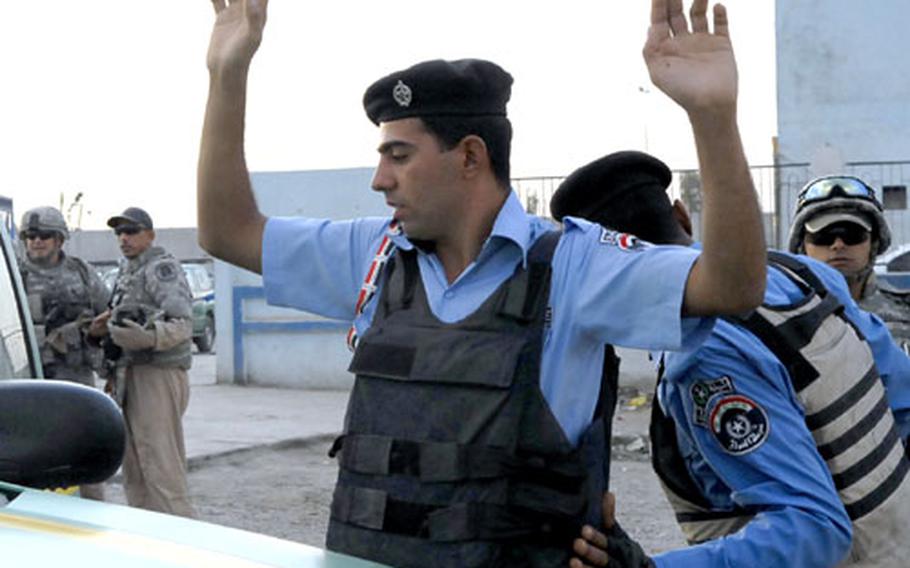 BAGHDAD &#8212; As the U.S. military has shifted more responsibility for security in the capital to the Iraqis, insurgents have responded by focusing their attacks on local police.

But the Iraqi security forces are still learning the basics of police work and have difficulty working on their own.

After teaching a group of Iraqi National Police officers at a Baghdad Station how to properly search a car, Air Force Staff Sgt. Ryan C. Rhodes, asked if there are any questions.

"When do we get our badges?" one police officer asked.

Rhodes and his teaching partner, Dennis Clark, tried to get their students back to the subject at hand.

The lesson is exceptional in that it is taught by two men with law enforcement experience &#8212; Rhodes is an Air Force security forces officer &#8212; the equivalent of a military policeman &#8212; and Clark is a former cop working as a civilian instructor. Most of the lessons come from active-duty troops with no formal law enforcement training.

Like many troops and civilians, Clark and Rhodes say the police have come a long way in the past few months, but when asked for specifics, the list of accomplishments is modest.

"Taking pride in their uniforms, equipment and vehicles (has improved)," Clark said. "Hopefully in a couple years they&#8217;ll have a police force like we have in the States."

An uptick in bombings in Baghdad in the past several weeks has put a spotlight on local security forces. In one recent case, officers who ran into an abandoned building that was on fire were hit by a bomb hidden inside. One officer was injured.

Lt. Hussein Mustafa Sharif, who works in the same station as the officer injured in the bombing, said his officers are still learning from their mistakes and that U.S. oversight is vital. "We still need their experience," he said.

A more tangible change for the better has been treatment of prisoners, troops and police trainers said. Whereas beatings and even torture were regular occurrences in the past, Iraqis now have a modicum of due process.

"You have some guys who are squared away and really want to be (Iraqi National Police officers) &#8230; but some guys are here for the money and that&#8217;s it," said Sgt. 1st Class Jose DeSantiago, who is attached to the 1st Brigade Combat Team, 4th Infantry Division and does many joint patrols with Baghdad police.

One big problem the U.S. military is working on is a lack of mid-level officers in the police ranks to provide leadership on the ground.

Rank-and-file officers who are supposed to lead joint U.S.-Iraqi patrols constantly look back to the Americans for instructions.

"They don&#8217;t do everything they should do because they know we&#8217;ll do it for them," said Staff Sgt. John Hardin, who is serving with the 1st Brigade Combat Team, 4th Infantry Division, "We act as a crutch."

On a recent night, U.S. soldiers showed up at a Iraqi National Police station late in the evening to do a joint patrol with Iraqi officers whose neighborhood had been hit by a spate of bombs. Nearly everyone at the station was asleep, and no patrols were planned until 10 a.m.

First Lt. Wendell Jenkins, a former police officer, lambasted a police lieutenant for leaving such a long gap in patrols.

"If we sleep now, a lot more (stuff) is going to start blowing up," he said.

The lieutenant said he was short-handed and that his officers were tired, but he reluctantly threw together an impromptu patrol.

Infiltration of the police ranks by militants also is still a major problem, as highlighted by the recent arrest of an officer in south Baghdad suspected of being part of an assassination ring run by Jaish Al Mahdi, a Shiite insurgent group.

This fuels lingering mistrust between agencies in the complex patchwork that makes up the Iraqi security forces. National and local police, Iraqi Army soldiers, and members of the "Sons of Iraq," still don&#8217;t do much coordination.

Some Iraqi National Police spend much of their time checking up on the "Sons of Iraq," a group of mostly Sunni former insurgents who have renounced violence.

"They all kind of butt heads," Rhodes said.