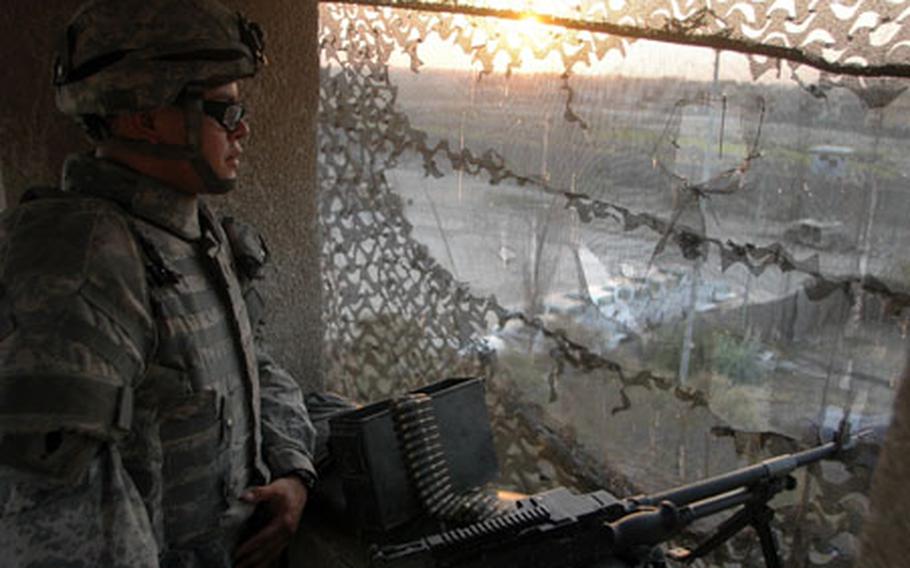 Spc. Mario Martinez, 26, of Big Lake, Texas, stands sentry at sunset on Wednesday evening atop the roof of Combat Outpost Sullivan in the eastern Baghdad neighborhood of Zafaraniyah, which lies in the city district of Karadah. The soldier is a member of the 2nd Infantry Division, 2nd Brigade, 2nd Battalion, 17th Field Artillery Regiment, based out of Ft. Carson, Colo. (Les Neuhaus / S&S)

Spc. Mario Martinez, 26, of Big Lake, Texas, stands sentry at sunset on Wednesday evening atop the roof of Combat Outpost Sullivan in the eastern Baghdad neighborhood of Zafaraniyah, which lies in the city district of Karadah. The soldier is a member of the 2nd Infantry Division, 2nd Brigade, 2nd Battalion, 17th Field Artillery Regiment, based out of Ft. Carson, Colo. (Les Neuhaus / S&S) 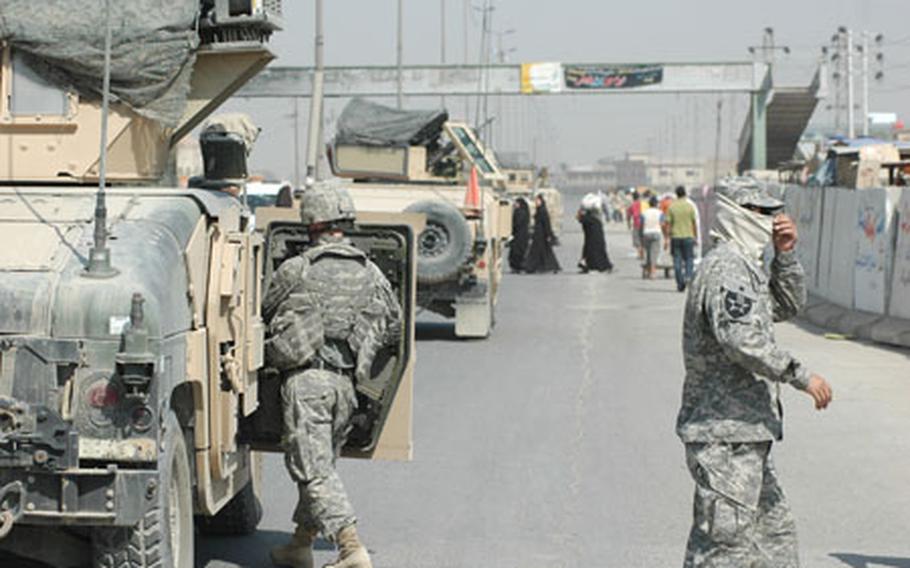 Late Wednesday night, members of a U.S. infantry unit were outside on a street handing a 9 mm pistol and a rifle back to their owners in an eastern Baghdad neighborhood.

The residents who own the weapons had legitimate identification and were not tied to any militias. The soldiers, who had just raided several houses, did not find the man they were seeking.

The 36-year-old soldier is part of a unit that works out of Combat Outpost Sullivan in the Zafaraniyah neighborhood of eastern Baghdad. He and a few dozen troops belonging to the 2nd Battalion, a unit with the 2nd Infantry Division&#8217;s 2nd Brigade, 17th Artillery Regiment, have been conducting these operations for about a year now.

Within an hour of their getting back to the outpost, another platoon sets out into the Baghdad night. No raids this time &#8212; just a chance to engage the populace on the streets, and then conduct a stakeout.

The troops in the 1st Platoon are looking for information. The Mahdi Army has been the biggest problem in the past, and even though the militia has been told to heel by its master, Muqtada al-Sadr, the U.S. troops still want to find out whom they fought several nights previously, and who was lobbing mortars at the outpost several nights in a row during the past week.

While patrolling some nearby palm groves, the soldiers had stumbled upon militants who engaged them in a pitched battle. Six militiamen were captured in the fight with the help of soldiers of the 1st Iraqi Army Division, who work alongside the U.S. troops.

The Iraqi people seemed friendly enough to the captain, with one inviting him and his executive officer, Maj. Christopher Wendland, into his tea shop for a quick chat.

He says Jaish al-Mahdi never attacked anyone in his neighborhood. The troops quietly disagree.

After tea, the platoon returns to its Humvees and heads for a rallying point a few kilometers away, headlights turned off.

Later, walking in two single-file lines across an open field on the skirts of a palm grove, the men take up positions near a farm camp where several families live.

With the full moon bright enough to cast the soldiers&#8217; shadows on the ground, moving tactically is a problem. It&#8217;s an even bigger problem when a pack of dogs run out from the camp immediately, letting out a 30-minute torrent of howls and yelps.

The farmers know the troops are there. But the soldiers are surveying beyond the camp and into the groves with night-vision and thermal-imaging gear. A few things move about, but nothing that draws the alarm of the troops, so they mount back up and return to the outpost.

Next morning, another patrol is headed out. But it is just a checkup on key assets in the area.

By the afternoon, another will head out.

In the tight quarters of the outpost, troops sleep several to a room, use one small dining area and have one computer to use for the Internet.

A couple of the soldiers have acoustic guitars and while away time playing Johnny Cash tunes between patrols, laughing and cajoling one another about what they&#8217;ll do when they return home.