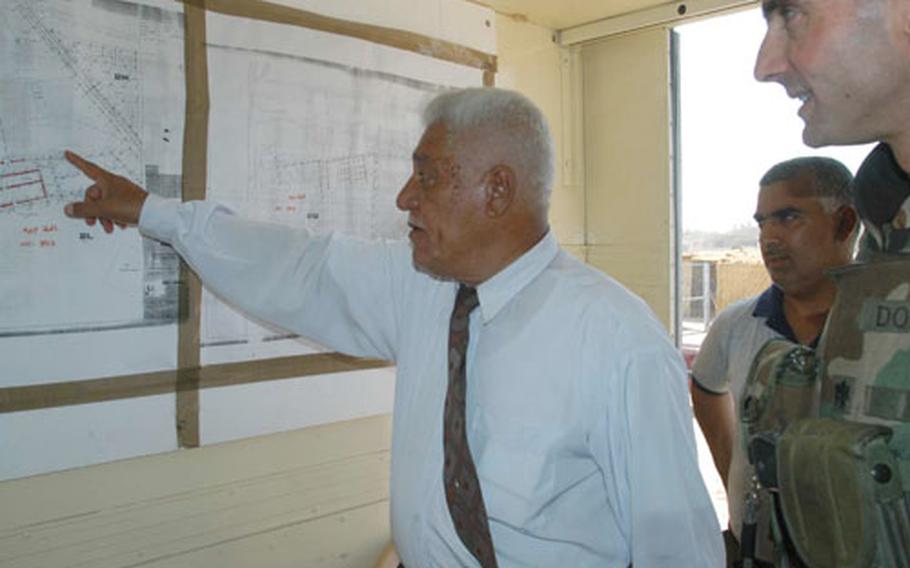 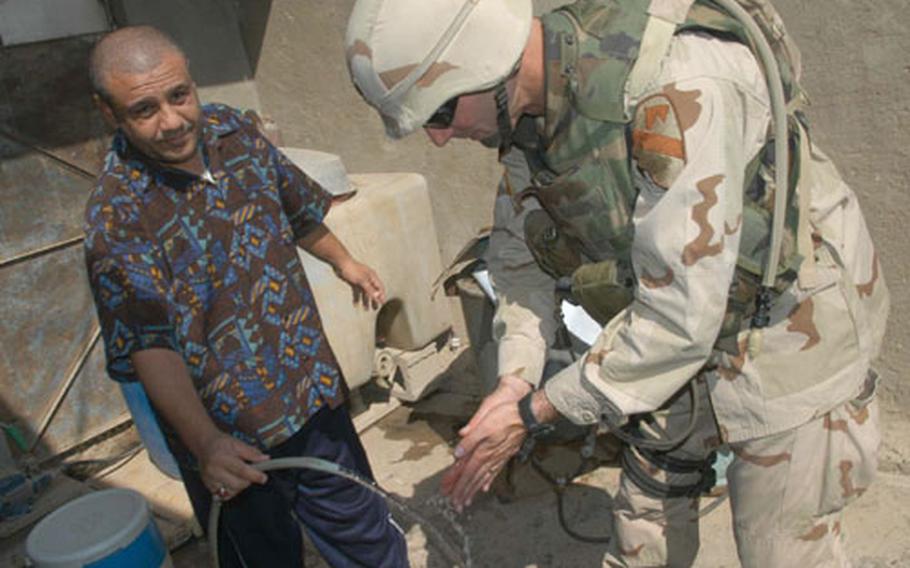 Arabia&#39;a Hatif holds a garden hose as Lt. Col. Brian Dosa, commander of the 8th Engineer Battalion, washes his hands. The 8th Engineers have been working on water and sewage projects in the southern Baghdad neighborhood of Zafraniya. Hatif has lived in this house since 1973. (Jason Chudy / S&S) 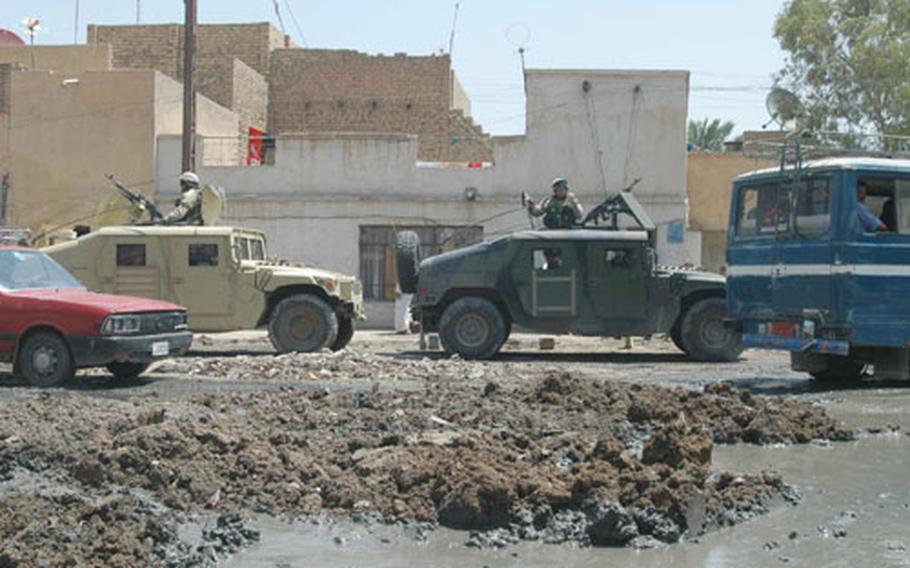 Sewage sits pooled at an intersection in Baghdad&#39;s Zafraniya neighborhood. In the background, soldiers of the 8th Engineer Battalion stand guard while officials look at a construction project for a new sewage system, the first that the area will have in its nearly 40-year history. (Jason Chudy / S&S)

To prove his point, Hatif grabbed a plastic hose from a small area in back of his house and turned it on for Lt. Col. Brian Dosa, commander of the 8th Engineer Battalion, who was touring electrical and sewage projects in the sprawling Zafraniya neighborhood.

A stream of clear water poured out and Dosa ran his hands underneath it, to the delight of Hatif.

His Baghdad-based 8th Engineers have been managing construction projects for basic essential services in two of the city&#8217;s nine districts.

Dosa said that a nearby electric plant is receiving a $20 million overhaul, having not received maintenance for decades.

Because of the neglect, Dosa said, some were operating at 20 percent to 25 percent efficiency.

To compound Zafraniya&#8217;s problems, 16,000 pieces of unexploded ammunition &#8212; ranging from mortar rounds to rocket-propelled grenades &#8212; were spread over an area of about three football fields in the middle of the neighborhood.

Fixing Zafraniya&#8217;s problems would require an army of manpower. Luckily, the U.S. Army stepped in.

The engineers contracted out millions of dollars worth of essential service projects to international corporations and Iraqi businesses. An Australian explosive ordinance disposal team, engineers and infantrymen from Army and National Guard units, plus neighborhood residents cleaned up the ammunition.

These projects aren&#8217;t only improving Zafraniya&#8217;s basic living conditions, but also are providing a few area residents with jobs. Dosa said the contracts required the hiring of local workers.

Most of its residents were out of work during the Saddam Hussein regime, too, he said. Zafraniya is broken up into clusters of mahalas, or houses. Hatif lives in Mahala 949, also known as the &#8220;Sinbad Quarter.&#8221;

Dirt streets are torn up throughout Zafraniya&#8217;s mahalas, either through neglect or design.

Dosa met with dozens of construction workers, local officials and area residents along the streets that were undergoing work.

&#8220;Now that they understand our intentions, they&#8217;re great,&#8221; Dosa said about Zafraniya&#8217;s residents. Attacks on his soldiers are rare, and at one stop Monday someone gave soldiers details of a recent mortar attack.

Sgt. Michael Brinton, a member of the battalion&#8217;s security detail, said that completion of the sewer system will bring a visible change to the neighborhood. The unit visits projects nearly every day.

Most residents hold their human waste in tanks, Hatif said, with trucks coming every week to haul it away. Everything else goes into the streets.

In a few months, engineers and residents alike hope Zafraniya&#8217;s streets will be cleared of sewage, the waste pumped to a water treatment plant about six miles away.

Its electrical distribution system, damaged by coalition bombing and looting, is nearly completed, and clean water will soon be flowing from its taps and hoses.

Because of family ties &#8212; his wife and mother-in-law are Iranian &#8212; and his father&#8217;s three-year prison sentence for being a leading member of the communist party, Hatif had never expected to have even these basic services.