Baghdad gas at a premium 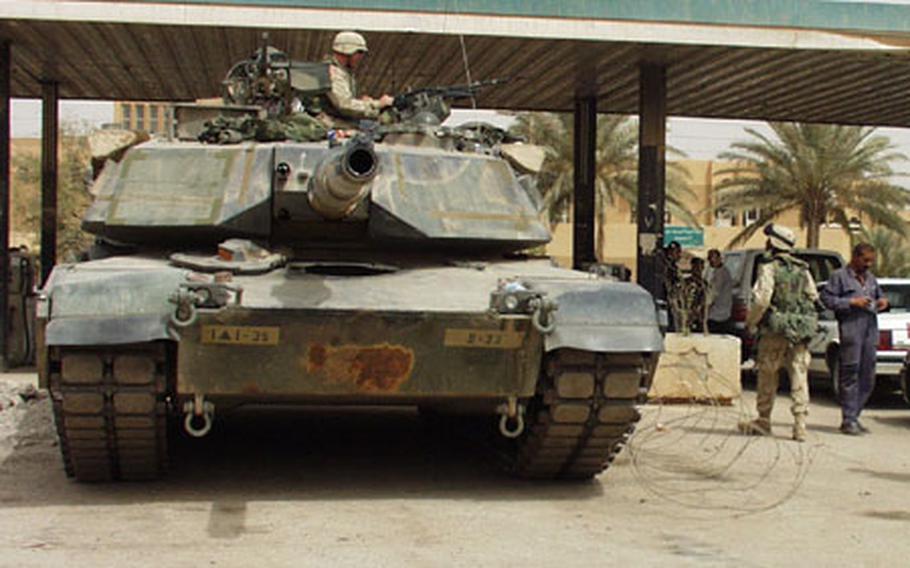 Sgt. 1st Class Joseph Hadley, guarding a gas station in Baghdad, Iraq, has found a new use for the bayonette on his weapon: He punches holes in plastic jerry cans used by black marketers. (Marni McEntee / S&S) Cars line up for miles to get cheap gasoline at a station in Mansur. Those who don&#39;t want to wait for the limited supply pay five times the price on the black market. (Marni McEntee / S&S) 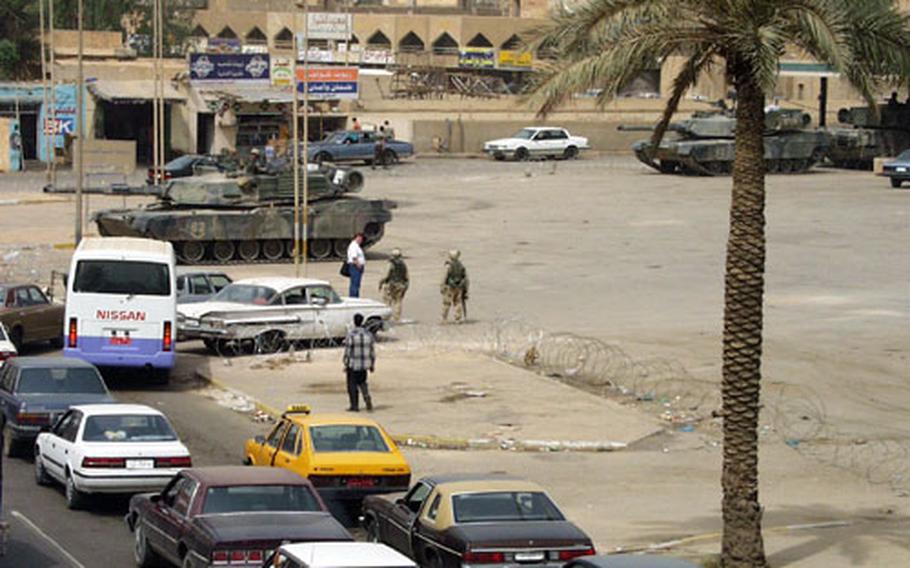 Three M1-A1 tanks and a platoon of 1st Armored Division soldiers guard a gas station in the Mansur district of Baghdad as drivers queue up to fill up. (Marni McEntee / S&S) 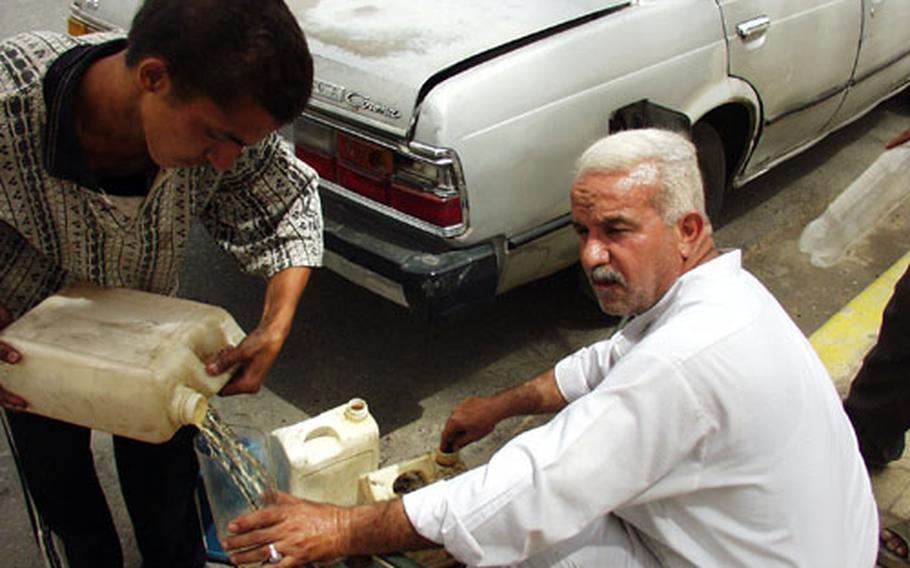 Fadhil Hamed Salman, right, siphons gasoline out of his car for sale on Baghdad&#39;s black market. Black market gas fetches five times the price as that in the station, where Salman filled his tank. (Marni McEntee / S&S)

On Monday, Kalicharan, of the Germany-based 1st Armored Division, was in his first day of guarding a gas station in western Baghdad&#8217;s Mansur district.

He and other members of Company B, 1st Battalion, 2nd Brigade, 35th Armor Regiment had just taken over the duty from 3rd Infantry Division troops.

In addition to scattering a number of outlaw gas hawkers trying to peddle gas to the long lines at gas stations, the soldiers must also keep peace among the drivers, who wait hours to buy fuel the legal way.

A two-car-wide line stretched a mile down a main road west of the Tigris River. Some cars ran out of gas before they reached the station, so drivers pushed them the rest of the way.

Their prize was cheap gas. For 50 Iraqi dinar a liter &#8212; about 25 cents &#8212; drivers filled up their tanks at one-fifth of the price charged by curbside black-marketers. But there isn&#8217;t enough of the stuff.

Production problems from Kirkuk in northern Iraq to Baghdad and cities south have plunged Iraq into an energy crisis. Gasoline is being rationed and other petroleum products such as cooking gas are in short supply.

The effects are long lines and short tempers.

&#8220;Half of my time is spent waiting for petrol,&#8221; said Mehdi Mohammed, a taxi driver with beads of sweat pouring down his face. He had been waiting in the hot sun for more than two hours Monday. It was barely 10 a.m.

Those who don&#8217;t want to wait buy their gas on the black market. Sellers fill up with cheap gas at the station, then drive around a corner and siphon the precious liquid into jerry cans.

On one Mansur street Monday, Fadhil Hamed Salman squatted on the curb, siphoning gas from his rusty 1980 Toyota Corona into five plastic bottles. Then he poured it into a metal jerry can.

Drivers pulled up to the curb and filled their tanks in minutes. They paid 250 Iraqi dinar a liter.

At the Al Mansur station, drivers are limited to 50 liters a day. The once-24-hour gas station now opens at 8 a.m. and closes at 4 p.m. for fear of bandits and looters.

Kalicharan&#8217;s soldiers will keep watch in M1A1 Abrams tanks with menacing names such as &#8220;Body Bag Filler&#8221; stenciled on their guns.