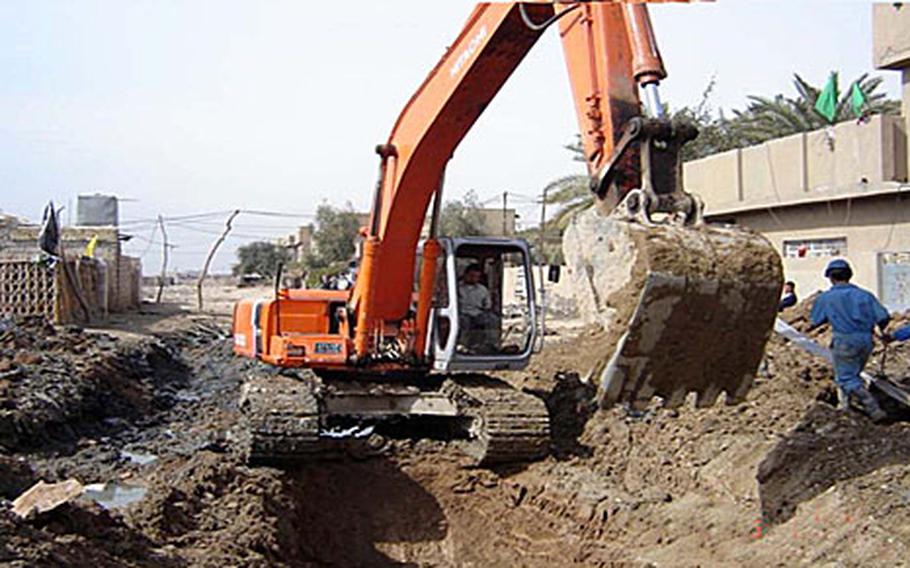 Iraqi workers use heavy machinery to help make room for a new sewer system in Oubaidi, a neighborhood in Baghdad, Iraq. Before the sewer project was completed, raw sewage collected in the streets, creating a health hazard. (Courtesy of the U.S. Army Corps of Engineers)

Homes in a neighborhood in east Baghdad have been connected to a sewer system for the first time under a $14.9 million project by the U.S. Army Corps of Engineers.

The two-year project involved installing about 14 miles of sewer pipe for house connections and trunk lines, according to a corps news release issued Friday.

Four pump stations also were built, capable of pumping up to 600 liters per second.

Before the project, residents of Obeidi, near Sadr City, had used trenches and lakes of raw sewage, which presented a health hazard, according to Mustafa Haddad, an Iraqi engineer who works for the corps&#8217; Gulf Region South District.

More than 20 Iraqi engineers work out of the corps&#8217; office south of Sadr City. They oversee more than $125 million in improvements in east Baghdad, including school and hospital renovations, electric network upgrades, road paving, and new water treatment facilities, according to the release.

One of Haddad&#8217;s fellow Iraqi engineers was gunned down after visiting a school project, other office workers have been injured, and Haddad himself has been targeted by insurgents and had to move his family.

&#8220;We&#8217;re here because we know how important this work is for our country and our people,&#8221; said Haddad, 29, who received a bachelor&#8217;s in civil engineering from the University of Technology in Baghdad.