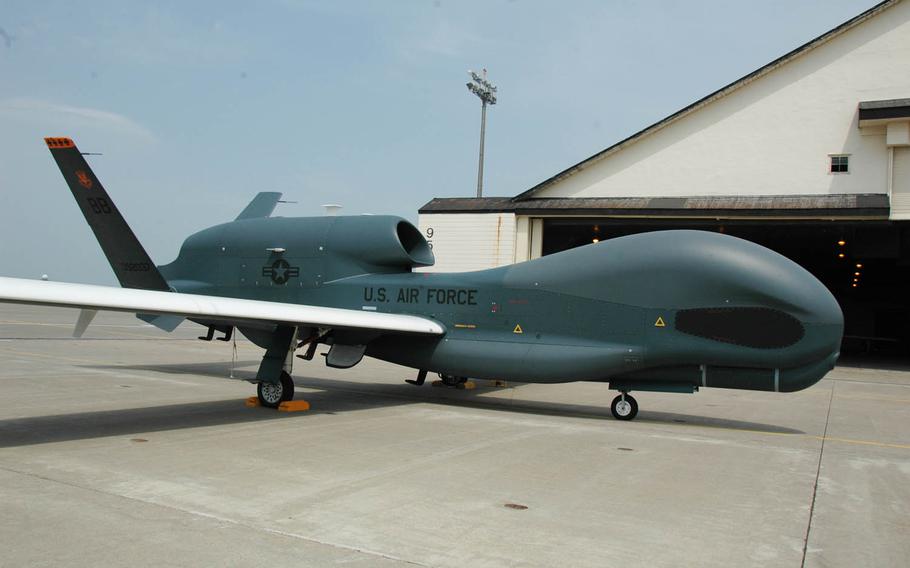 A Global Hawk unmanned surveillance drone is parked at Misawa Air Base, Japan, in 2014. Because of bad weather, two Guam-based Global Hawks landed at Kadena Air Base on Okinawa, Monday, Aug. 1, 2016. (Seth Robson/Stars and Stripes)

The RQ-4 drones — which can fly up to 60,000 feet — landed Monday evening at Kadena Air Base, Japanese media reports said. The aircraft support intelligence-gathering operations throughout the Pacific, U.S. officials have said.

It’s unclear how long the Global Hawks, based at Guam’s Andersen Air Force Base, will remain on the island, said Air Force Master Sgt. Jason Edwards, an Air Force spokesman. The Air Force did not immediately have information about whether special equipment or personnel would be needed there to relaunch the aircraft, he said.

Global Hawks have flown out of Misawa Air Base in northern Japan the past two summers. Runway renovations kept the aircraft from deploying there this year, Maj. George Tobias, 5th Air Force spokesman, said in June.

Global Hawks are a key tool in keeping tabs on North Korea’s nuclear weapons development and Chinese naval maneuvers. Both are of particular interest to the Japanese government, which plans to acquire its own large unmanned surveillance aircraft.

The aircraft played a key role in the disaster-relief effort that followed the earthquake, tsunami and nuclear disaster that struck Japan in March 2011. They also flew missions over the Philippines as part of the Typhoon Haiyan relief efforts in 2013.