Bad Dürkheim: Ready for a nip at the Oktoberfest of wine? 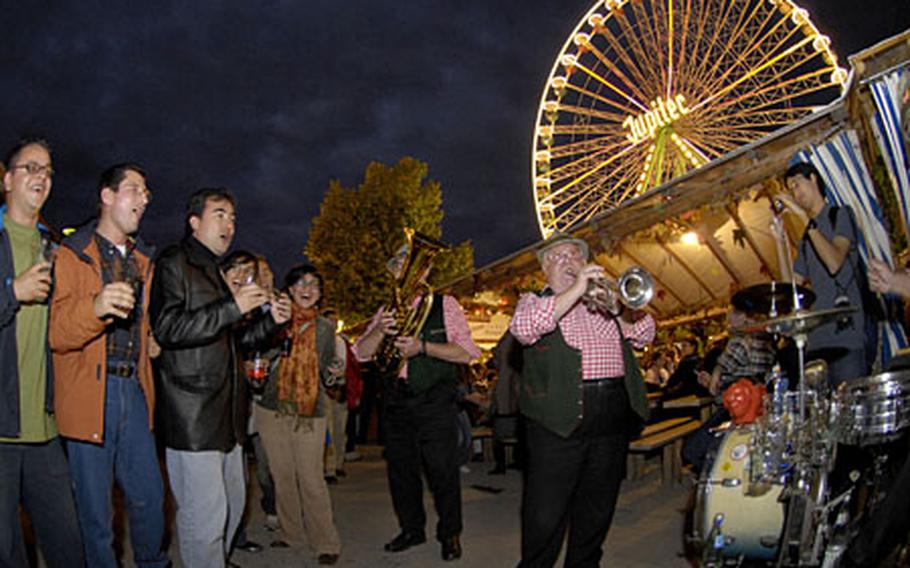 Participants in Bad Dürkheim’s Wurstmarkt (Sausage Market) festival sway and sing with a traditional German oompah band Friday during opening night. The heart of the festival can be found in the “Schubkärchler” or wheel barrel area where all the local wine makers have tents set up for drinking. (Ben Bloker / S&S)

There is no bigger party for wine lovers in Germany than the Bad D&uuml;rkheim Wurstmarkt. Call it the Oktoberfest of Wine.

The nine-day party began Friday with the ceremonial tapping of the keg, which included wine instead of beer.

The village of 19,000 people, about 18 miles west of Kaiserslautern, claims to have the biggest wine fest in the world, attracting more than 1 million people. It is also one of the oldest, dating back more than 570 years.

Bad D&uuml;rkheim regulars bill their fest as a much more sophisticated party than the Oktoberfest, which has a reputation for drunken debauchery and beer-fueled shenanigans.

While the festival is called the Wurstmarkt, or Sausage Market, it is more of an outdoor wine party. Vendors sell any kind of German sausage you can imagine and the grounds have the feel of a state fair with amusement rides and food stands, but it is the wine that brings in the people.

This year, the festival offers more than 300 types of local wine, from dry Rieslings to sweet ice wine. Revelers pack into the dozens of wine stands hosted by local vineyards and drink wine in half-liter glasses.

Those who like to pace themselves order the Shorle, half sparkling water and half wine.

But few people drink from their own glass. Most of the locals share their &ldquo;community cups&rdquo; of wine among everyone in their group, sometimes even with a stranger waiting for his or her glass.

Narrow window tables force drinkers to sit so close together that it is difficult not strike up a conversation with the person next to you.

And that is one of the reasons why many people like Kurt Schroeder of Los Angeles continue to come every year. He has been coming to the fest for the last 20 years.

&ldquo;Sure, people come for the wine,&rdquo; Schroeder said. &ldquo;But this is really a fest about people.&rdquo;

Some bases offer bus trips to the fest, but the train might be the best bet. The town&rsquo;s train station is within walking distance of the fest.

For those who drive, parking is available in designated areas around the perimeter of the grounds.

For more information, including a program of events, see duerkheimer-wurstmarkt.de.