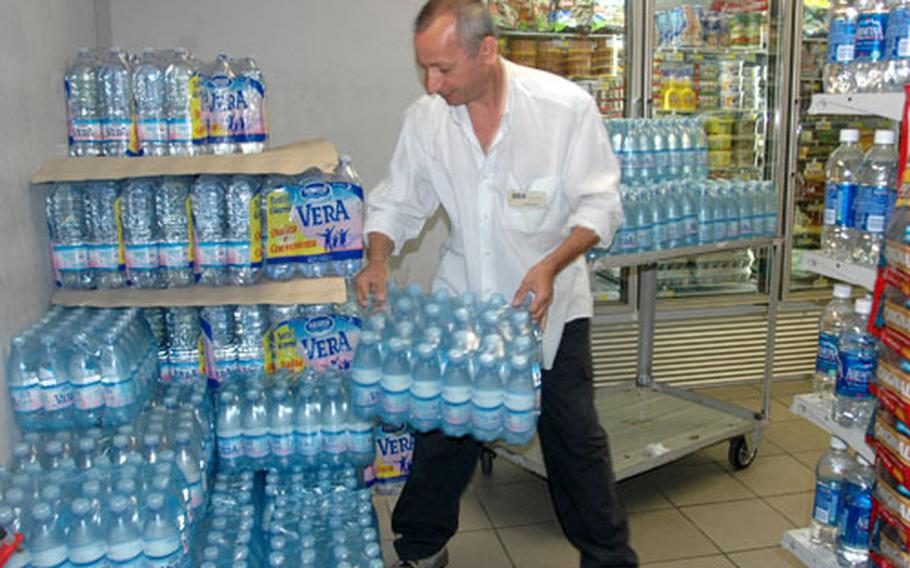 Carmine Desio, an employee of the Navy Exchange mini-mart at the Capodichino base in Naples, Italy, stocks bottled water for sale on Tuesday. The exchange plans on increasing its supply of bottled water in the coming weeks as Navy officials caution personnel who live off base to drink, cook with and even brush their teeth with bottled water. (Sandra Jontz / S&S)

NAPLES, Italy &#8212; Navy officials are cautioning people living off-base in the Naples area to avoid drinking, cooking or brushing their teeth with tap water after high levels of bacteria were found in a recent round of testing.

As of deadline Tuesday, the Navy did not respond to questions about the types of bacteria found in the water.

The selected houses are part of an ongoing health assessment started by the Navy in January to determine if living in Naples is a hazard to one&#8217;s health. The assessment followed concerns over uncollected trash, air pollution caused by burning trash and possible soil contamination caused by illegal dumping. Experts also are testing soil and monitoring the air quality.

So far, homes in Casal di Principe, Caserta, Pozzuoli, and Villa Literno have been tested. Most of the 29 homes whose water have high bacteria levels use well water, officials said.

Because only a small sample of homes has been tested, the results are not statistically significant or representative of health risks throughout the region, officials said.

"Are you kidding me?" Taeko Yoshino said when told of the recent findings. She suspects her house in the Monteruscello suburb of Naples is serviced by well water, because each time there is a lack of water pressure, her landlord flips a pump switch. She plans to find out for sure now, she said.

While she already drinks bottled water out of habit, she washes dishes, bathes and brushes her teeth from the tap. "I&#8217;m very concerned about this. I have no choice but to live [off base]," Yoshino said. As a single civilian, she is not entitled to live on the base in Gricignano &#8212; housing is open only to families, or single active-duty servicemembers.

But officials have started to review the policy excluding single civilians from base housing because of residents&#8217; concerns, base spokesman Lt. Paul Macapagal said.

Because of the water results, Navy leaders are "exploring options for increased allowances or for purchasing bottled water for personnel, but it is all in the exploratory stages right now," said Lt. Cmdr. Wendy Snyder, a spokeswoman with Navy Region Europe.

Between January and June, the Naples commissary sold 150,276 bottles of water of varying sizes and flavors &#8212; "far more water than the two similar-sized German location commissaries we queried in our automated sales system," said Gerri Young, spokeswoman for Defense Commissary Agency. The sales likely are related to "increased temperatures in Italy and the ongoing water issues in the communities surrounding the base," Young said.

The base housing office&#8217;s database currently does not indicate which properties are serviced by well water instead of city water, however the office is contacting that information from all landlords in the database, said Sandy Randolph, housing director.

"The water source will be annotated in the housing database. We have several thousand listings ... it will take several months to complete."

Cynthia DeZouche said she was surprised by the findings. "I wasn&#8217;t expecting them to find much, actually," she said. DeZouche already drinks bottled water, but uses tap water to brush her teeth and boil water for pasta, for example.

She doesn&#8217;t anticipate changing those habits, mainly because where she lives in Monte di Procida, she is on city water and not well water &#8212; a factor that mitigates her concern. "But I wouldn&#8217;t drink well water in the States either." She started drinking bottled water more than a year ago because of the high concentration of minerals, especially calcium, prominent in this area of southern Italy.

For more information about the public health study, go to: http://www.nsa.naples.navy.mil/risk