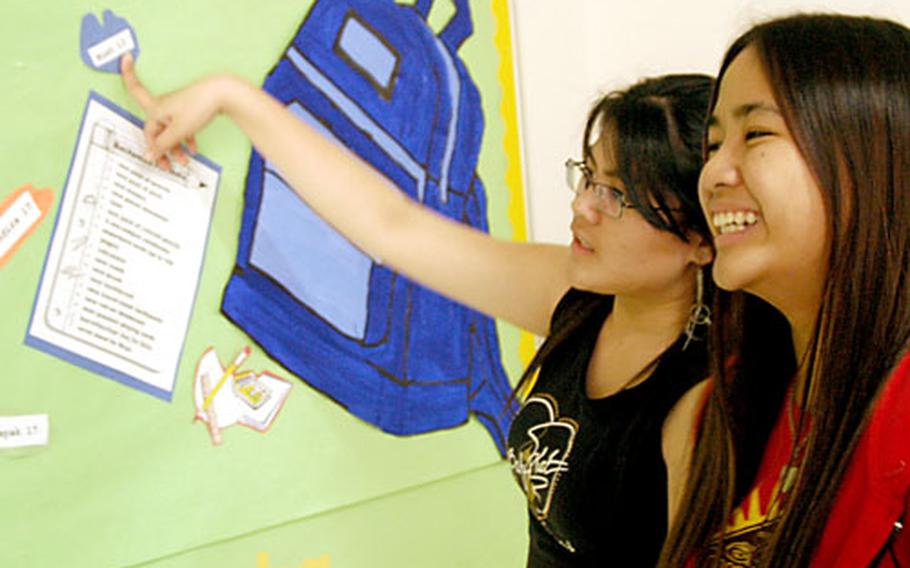 Kathryn Dizon, 13, and Anne Bacay, 13, practice saying Indian names of some of the 50 orphans with whom Yokosuka Middle School students plan to strike up friendships in the “Backpacks for India” program. (Allison Batdorff / S&S)

The names sound exotic to the three American teenagers squinting at Yokosuka Middle School&#8217;s bulletin board.

Besides how to say it, Hannah, 13, knows only a few things about Rajeshwari.

She hopes to learn more about Rajeshwari through Backpacks for India, a YMS Student Council, Cultural Heritage Committee, and National Junior Honor Society project that kicked off March 17. YMS students are preparing care packages in backpacks for 50 orphans in the Shalom House outside of New Delhi.

All will receive a backpack full of pencils, pens, erasers, sharpeners, notebooks, toiletries, and fun items like playing cards and barrettes.

A letter will be inside each backpack explaining about the project and asking their recipient to write back, if they wish. All the packs will be mailed April 2.

&#8220;The kids are so excited about it. Some classes already have their backpack finished,&#8221; Hickey said.

The students are in charge of the project, and are buying or donating the items on their own, she said. This is important, she added.

Hannah hopes Rajeshwari will put her new pen to paper and write her class a letter, she said.