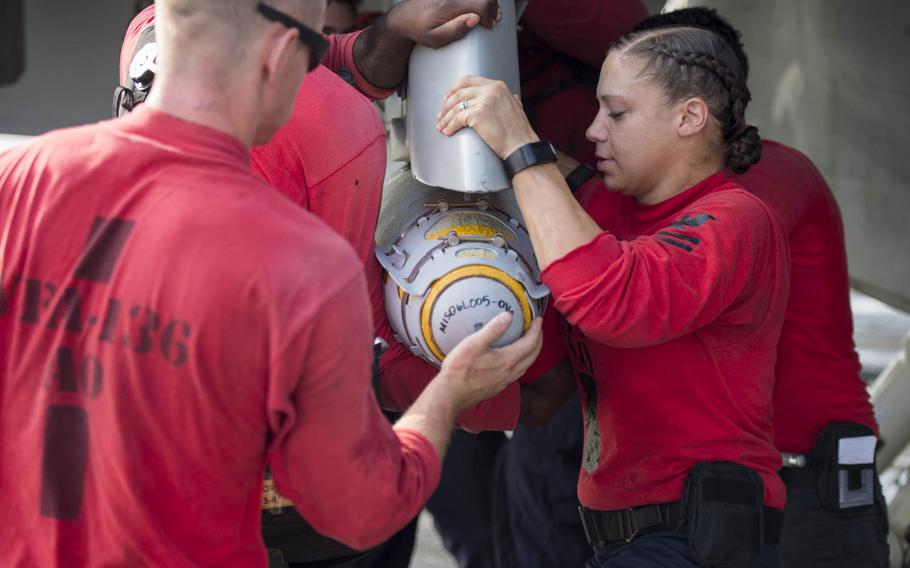 Buy Photo
A crew of sailors, formerly known as aviation ordnancemen, work together to load a bomb onto a fighter jet during their morning routine aboard aircraft carrier USS Theodore Roosevelt on Aug. 14, 2015. The Navy has eliminated its traditional rating system in favor of Navy Occupational Specialties. (Chris Church/Stars and Stripes)

Buy Photo
A crew of sailors, formerly known as aviation ordnancemen, work together to load a bomb onto a fighter jet during their morning routine aboard aircraft carrier USS Theodore Roosevelt on Aug. 14, 2015. The Navy has eliminated its traditional rating system in favor of Navy Occupational Specialties. (Chris Church/Stars and Stripes) 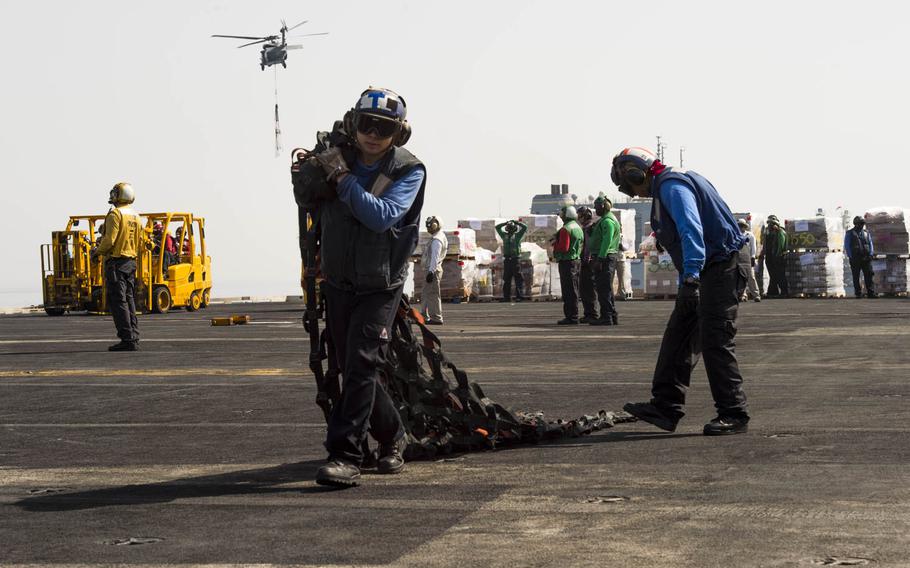 Buy Photo
Seaman Skyler Vanoosten, whose rate was Aviation Boatswain's Mate Handling, aboard the aircraft carrier USS Harry S. Truman, carries a net that was used to hold and transport a crate during a replenishment at sea across the flight deck on April 26, 2016. The Navy has changed the enlisted rating system and no longer has rating titles, instead addressing personnel by their rank. The Navy also no longer distinguishes between airman, fireman, and seaman. (Chris Church/Stars and Stripes)

MANAMA, Bahrain — Many sailors expressed anger, dismay and confusion at the Navy’s announcement last week that it was abandoning the service’s centuries-old enlisted rating system.

Others embraced the change, as the Navy leadership hoped most would after they realize what commanders say are the advantages of the new system.

In conversations and in comments on social media, including on the U.S. Navy’s Facebook page, sailors expressed frustration over the loss of tradition and called it one of the worst decisions the Navy has ever made.

Rates such as Boatswain’s Mate and Gunner’s Mate go back hundreds of years and are steeped in Naval heritage.

“When you’re a Boatswain’s Mate it comes with a lot of pride because of what you do,” said Seaman Schoanna Smith, stationed aboard the USS Mustin in Yokosuka, Japan. “Why can’t we be noticed as Boatswain’s Mates? Not everyone does the same job. We stay after work and put in more hours than a lot of the other rates. I feel it’s like saying all the rates are the same, which they aren’t.”

The changes under which sailors will now be addressed only by their military rank, not by their rate, went into effect immediately when they were announced Thursday. Under the new system, enlisted sailors will be grouped into broader Navy Occupational Specialties, similar to the other services.

An internet petition posted to whitehouse.gov on Thursday asking that the rating system be restored had garnered nearly 41,000 signatures by Sunday.

“One only has to visit Navy social media pages to see the disgust and outrage of current and former personnel,” the petition reads. “One by one current leadership continues to erode the very things that set the Navy apart from the other services. Mr. President, I and the others signing this petition request you use your authority to restore to our Sailors what they have earned.”

A spokesperson for the Chief of Naval Personnel told Stars and Stripes in a statement that with all new initiatives, the Navy expects and seeks feedback, and would continue to do so.

“This cultural change will not happen overnight,” Cmdr. John Schofield said in the statement. “It will take a measured approach to make it the norm. The feedback from the sailors, be it positive, negative, or neutral, is crucial for us to assess and evolve this transformational change and push it forward.”

Navy Secretary Ray Mabus had ordered the review of Navy titles in January as part of the plan to open all positions to women. The Marine Corps, which is also under Mabus’ leadership, has eliminated “man” from most of its occupation titles. Many commenters on social media said they thought that was the prime reason behind the decision to drop the rate system.

The Chief of Naval Personnel’s office said that the working group created to modernize the Navy’s rating system considered Mabus’ directive and it is reflected in the new Navy Occupational Specialties.

The Navy believes the traditional ratings system unnecessarily constrained enlisted career paths and the Navy’s ability to make the most of talent in the workforce, Schofield said. The intent of the change is to maximize career flexibility and give sailors opportunities for training and certification that aligns with the civilian workforce.

Not everyone was opposed to the changes.

“I feel like it’s a good idea, primarily because it allows us to cross-train into other fields that we wouldn’t have had the chance to otherwise,” said Petty Officer 1st Class Juliana Gomez, whose rate was Machinist’s Mate, serving as a recruit division commander at Recruit Training Command, Great Lakes, Ill. “I think our leadership did a lot of research into this before deciding this would be the best way to stay gender neutral, which seems to be one of their main goals since they brought up the subject earlier in the year. I’m excited about seeing a positive change and how this would affect us in the long run.”

“I think the Navy has the right idea to line themselves up with the civilian sector,” Lane said. “However it’s going to be a big change for us. Remembering to call each other petty officer instead of something like IT2 (information systems technician second class) or ET3 (electronics technician third class) is going to take a while.”

However, even among those who viewed the change more favorably, there was a lot of confusion about what it means. Across both social media and the fleet, sailors wondered what the specific job changes would be and how the concept of training outside their rate would work.

“I feel like there are definitely a lot of unanswered questions,” said Petty Officer 3rd Class Mauricio Urrutia, stationed at Naval Support Activity Bahrain, whose rate was Master at Arms. “I can’t help but wonder what it will be like now for things like advancement, things that are very rating specific.”

Still, some felt that the Navy was re-inventing the wheel, as sailors already have opportunities to get qualifications in other ratings, with some limitations. “I thought the whole rating thing was working, there wasn’t an issue with it,” said Petty Officer Third Class Jonathan Guerra at NSA Bahrain, formerly a Master at Arms. “They are trying to do a whole new broad spectrum of what the Navy looks like and what people look at the Navy as.”

“I think it’s typical with any type of change with the Navy ... everyone has an initial reaction that is a lot of times negative,” Johnson said in an interview. “I think they spend more time reacting to it negatively instead of embracing the change and moving forward and figuring out the best way we can actually make the best of it.”