Back on base, health tests a must 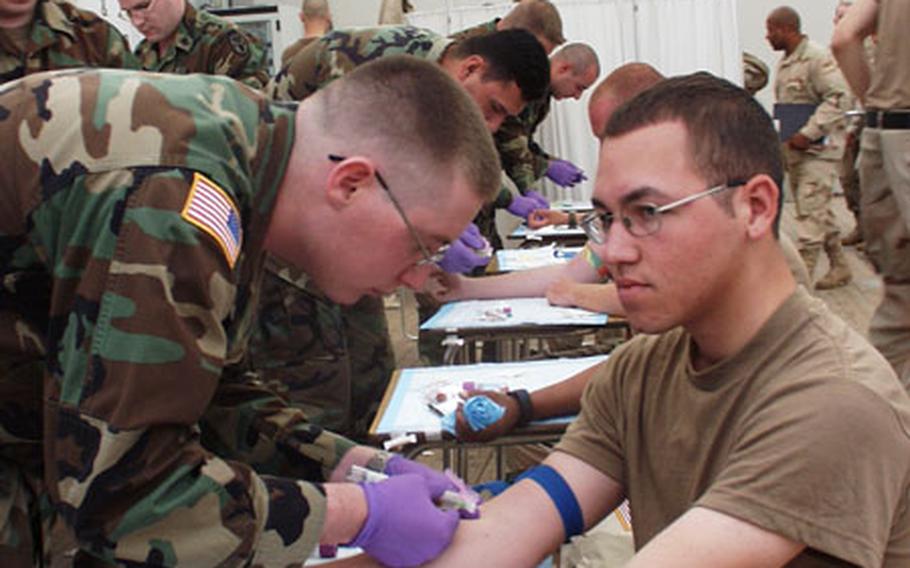 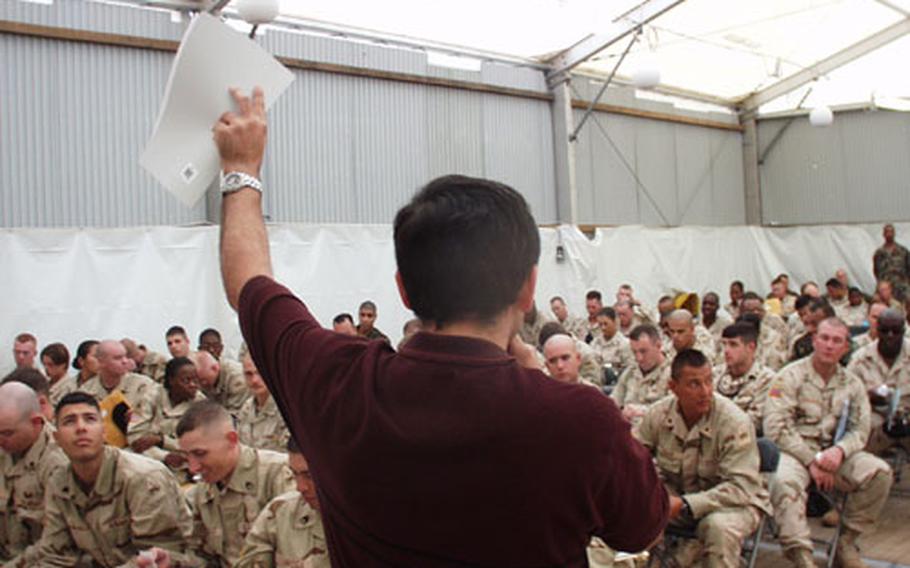 With 30 days of leave only a week away, a group of Baumholder soldiers listen Saturday to a briefing on the first day of a week-long reintegration program at Smith Barracks in Baumholder, Germany. The soldiers, who returned from Iraq on Friday, are required to go through the seven-day program. Speaking to soldiers about basic health screenings is Norm Estrada, who normally works one the post as the Equal Employment Opportunity representative. (Kevin Dougherty / S&S)

BAUMHOLDER, Germany &#8212; Some griped that the lines are too long. Others said the process seemed fast and hassle-free. More than a few just looked spent, and not yet fully back from Iraq &#8212; at least from a cognitive standpoint.

But there they were Saturday &#8212; like the hundreds before them and the thousands who will follow &#8212; undergoing a medical check on their first full day of cool days and quiet, quiet nights.

&#8220;We are trying to ease you back into garrison life,&#8221; said Lt. Col. Frank Bannister, commander of the Army medical clinic in Baumholder.

As many soldiers already know, U.S. Army Europe&#8217;s weeklong reintegration program involves much more than doctors and needles. It&#8217;s about regaining your bearings, and your life.

On Saturday, Bannister reminded a new batch of war veterans &#8212; especially those with spouses and kids &#8212; that things have changed on the home front and patience and discipline are needed. After 30 to 45 days, he said, things should be OK.

The lieutenant colonel kept his remarks short and to the point, with a measure of levity thrown in.

The reintegration process begins the first full day a soldier is back on post. The week is filled with an array of appointments, ranging from financial briefings to sessions on reassignment orders.

While Baumholder expects to see hundreds more in the days ahead, other 1st AD communities are just beginning to string up the bunting. Giessen and Friedberg, for example, were to receive their first group of GIs over the weekend, with Wiesbaden set to go this week.

&#8220;They are joyful, but tired,&#8221; said Lt. Col. Ron Keen, the commander of the health clinic in Wiesbaden. Keen came to Baumholder to assist Bannister and his staff.

Not far away was a group of single soldiers waiting for the nod to enter the medical screening tent. The process involves giving a blood sample, undergoing a tuberculosis test and ensuring that medical data from downrange gets incorporated into each primary file.

Lehman, 21, was among several soldiers who said they plan to leave the Army and return to civilian life. Lehman, a native of Watertown, Wis., wants to go to college to study criminal justice.

Sgt. Ericka Harris, 32, a mechanic with the 40th Engineering Battalion, said she, too, plans to leave the active-duty ranks after nine years in uniform. Harris is hoping to land a U.S. government service job in Germany.

Many echoed that concern, including Bannister.

Still, Bannister and his reintegration team are focused on the 2nd Brigade soldiers before them.

After one week, his diagnosis is that the troops look tired, but terrific. Among the nearly 1,000 brigade soldiers now in the postwar pipeline, only a few have shown any real problems &#8212; whether of mind or body &#8212; to warrant special attention or care.

Most have shown remarkable resilience. They go from fielding serious questions about their health to checking on their local phone service or inquiring about joining Special Forces or the Veterans of Foreign Wars.

Bannister, Keen and others overseeing the process say this first week of reintegration is crucial for the returning servicemembers. Each day, Bannister said, someone needs to look into their eyes to make sure they&#8217;re adjusting properly.

Alluding to some airborne troops who had trouble adjusting to life after Afghanistan in the summer of 2002 that resulted in a number of domestic killings, Bannister said: &#8220;We are not going to have a Fort Bragg here, not in Baumholder.&#8221;