Back in Germany, aviation crews recall harrowing mission in Iraq Lt. Col. Robert Werthman, commander of the 3rd Battalion, 158th Aviation, prepares on March 19 for the unit&#39;s last mission from Balad, Iraq. Most of the unit&#39;s 350 soldiers have returned to their home base in Giebelstadt, Germany, in the past two weeks after a 13-month tour that was extended by the Pentagon. (Steve Liewer / S&S)

Lt. Col. Robert Werthman, commander of the 3rd Battalion, 158th Aviation, prepares on March 19 for the unit&#39;s last mission from Balad, Iraq. Most of the unit&#39;s 350 soldiers have returned to their home base in Giebelstadt, Germany, in the past two weeks after a 13-month tour that was extended by the Pentagon. (Steve Liewer / S&S) 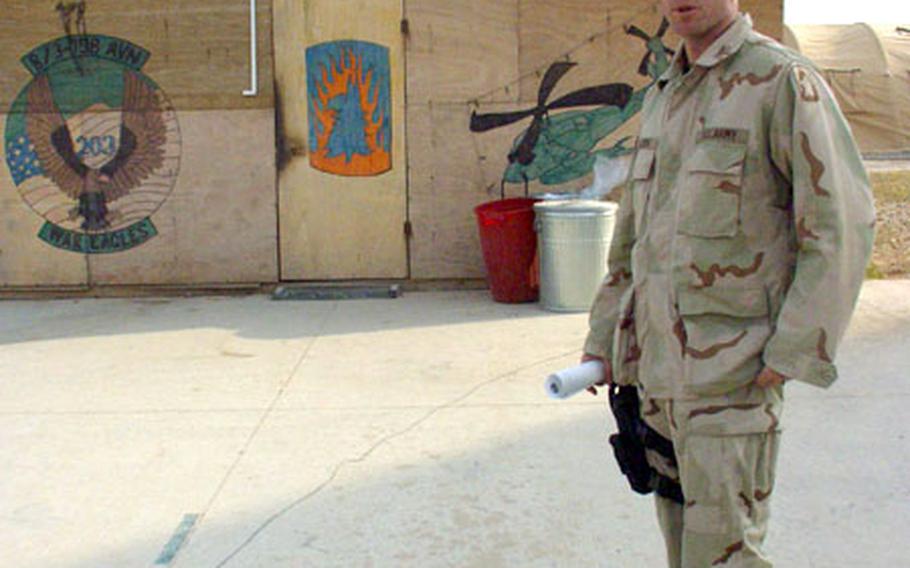 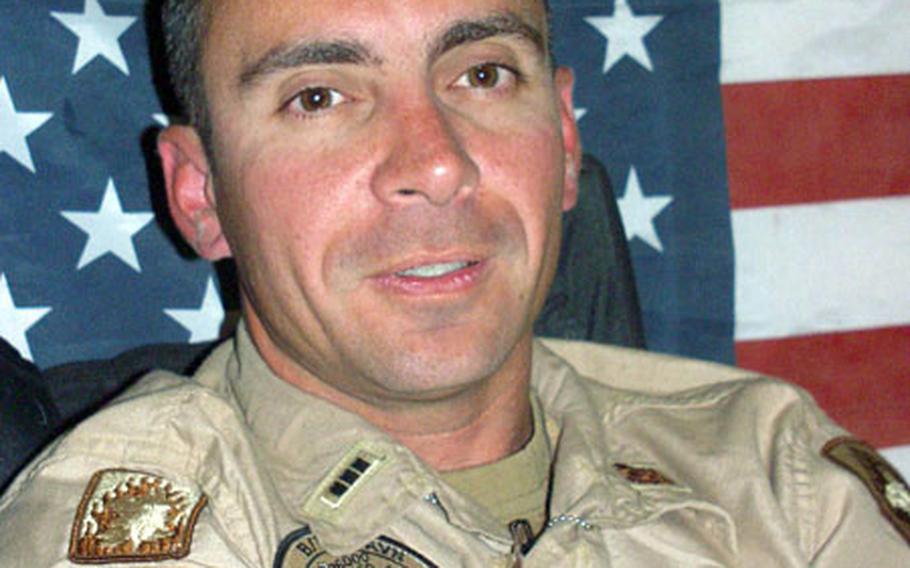 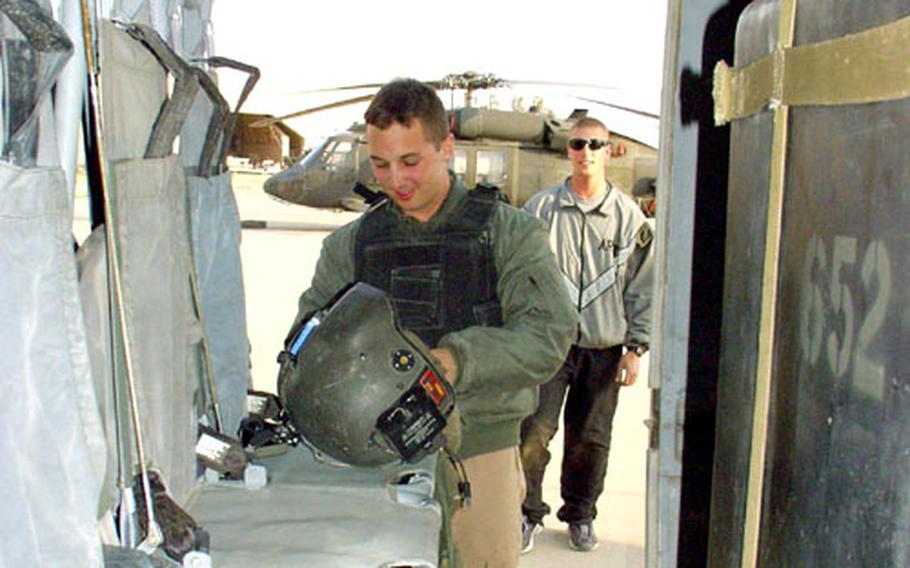 Spc. Nicholas Conroe of 3rd Battalion, 158th Aviation Regiment prepares a UH-60 Black Hawk for his unit’s last mission March 19 after a year in Iraq. He was wounded in the shootdown of a Black Hawk Oct. 25, earning his unit’s only Purple Heart. (Steve Liewer / S&S) 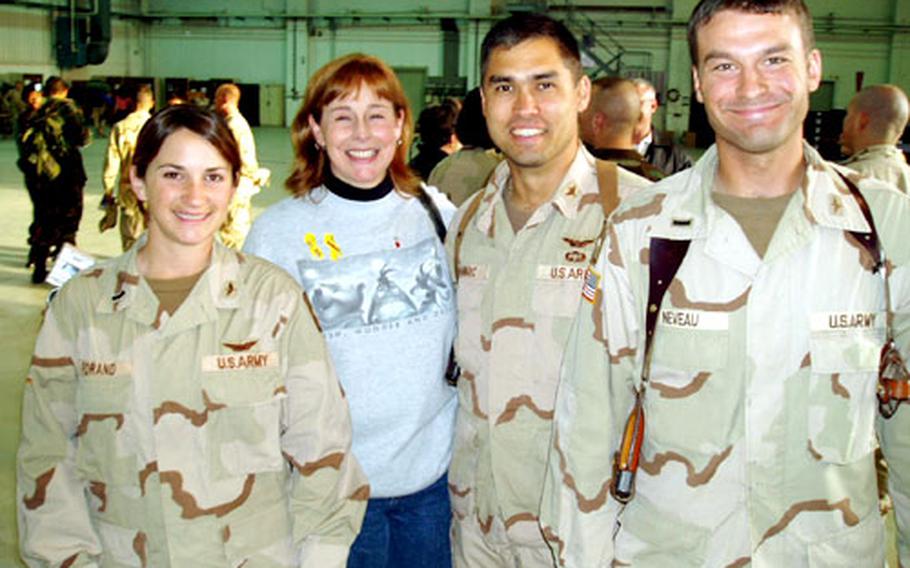 BALAD, Iraq &#8212; For Spc. Nicholas Conroe and his Black Hawk crew mates, trouble hit, quite literally, out of the clear blue sky.

Conroe, 23, a crew chief from Erie, Pa., was flying with two pilots, another crew chief and a passenger over the Tigris River into the palace complex at Tikrit on Oct. 25. He and his buddies from the 3rd Battalion, 158th Aviation Regiment had flown hundreds of similar milk runs since arriving in Iraq the previous March.

Conroe never saw the rocket before it slammed into one of the engines just over his head.

Conroe noticed blood on the leg of his brown flight suit. Shrapnel from the surface-to-air missile had penetrated his knee and calf. It earned the 3-158 Aviation&#8217;s only Purple Heart during the unit&#8217;s 13-month deployment.

This week, Conroe and the last of his mates returned home to Giebelstadt, Germany, 13 months after the 3rd Battalion headed to Iraq. The largest group of 145 soldiers arrived Sunday night after a nine-hour trip from the Middle East to the cheers of about 250 assembled family members in the battalion&#8217;s hangar.

The Pentagon extended the tours of about 1,500 troops &#8212; including the 3-158 Aviation, the largest single unit &#8212; beyond one year to bridge gaps in the Iraq mission during this spring&#8217;s massive troop rotation. Most of the extended troops were from Europe.

The unit&#8217;s 350 soldiers endured an exhausting deployment that started out difficult and got tougher and more dangerous with each month.

The rocket that destroyed Conroe&#8217;s Black Hawk in October was the first fired at a U.S. military helicopter since the ground war ended. But many more from other units would be shot down in the ensuing months, costing dozens of lives.

Pilots and crew chiefs from the 3-158 Aviation survived several more close scrapes, even as they counted down the days until their delayed homecoming.

The unit arrived in Iraq last year on the eve of the invasion. The warning orders arrived on Super Bowl Sunday, even as its sister unit in Giebelstadt, the 5th Battalion, 158th Aviation Regiment, packed up for an early February deployment.

Staff Sgt. Daniel Sutczak, 32, of San Antonio, was up to his elbows in grease, replacing the engine of his car when word came March 2 to leave. He had volunteered to go with the advance party, which meant he had to be ready with barely 12 hours&#8217; notice.

As they trickled in during the next several weeks, 3rd Battalion soldiers found themselves split among several camps in Kuwait, including Camp Udairi and the 35th Kuwaiti Armored Brigade base west of the capital.

During the war, too, the battalion scattered: to Tallil Air Base near Nasiriyah; Bushmaster, a desert airstrip near Najaf, and other camps. All endured hellish convoy rides north.

Shortly after the fall of Baghdad, the entire unit reunited at Balad Air Base, a sprawling former Iraqi post 50 miles north of the capital that the Americans would rename Anaconda.

Capt. Scott Halter, 29, of Kansas City, Mo., was in the first group to arrive. He found a hastily abandoned base strewn with junk.

Working around 12-hour days flying combat, peacekeeping, rescue and VIP missions, the soldiers scrounged wood, metal, tools, wires and fixtures anywhere they could find them to improve their camp.

From the beginning, Anaconda has suffered almost daily mortar attacks, though few have caused injuries.

As the sweltering summer set in, the pace of operations taxed the whole unit. No one suffered more than the mechanics of Company D, 3rd Battalion maintenance unit.

The battalion&#8217;s Black Hawks already were flying three times as many hours as normal. Keeping them running required hard-to-find spare parts, and the heat took its toll.

Mechanics like Spc. Jeremy Rusk, 22, of Amarillo, Texas, paid special attention to keeping seals tight on the helicopters&#8217; tail rotors and gearboxes, and to keeping oil and air filters clear of sand.

By fall, living conditions had improved. But the shootdown of Conroe&#8217;s and Gutierrez&#8217;s Black Hawk turned a seemingly safe job into something more like combat.

Pilots avoided river valleys, where guerrillas can take cover among trees, while flying faster and lower to stay out of enemy sights.

Still, the danger never let up. In February, the unit flew its busiest month yet, taking on the missions of the departed 5-158 Aviation. Three 3rd Battalion Black Hawks experienced close calls.

Berdanier was the pilot on two of them. In one, guerrillas near Fallujah ambushed a three-helicopter formation. The aircraft escaped only by taking evasive action. In the other attack, a rocket flew past under the rotor boom, within a few feet of his cockpit.

After so long at war, some of the soldiers could hardly believe it finally was time to go home.