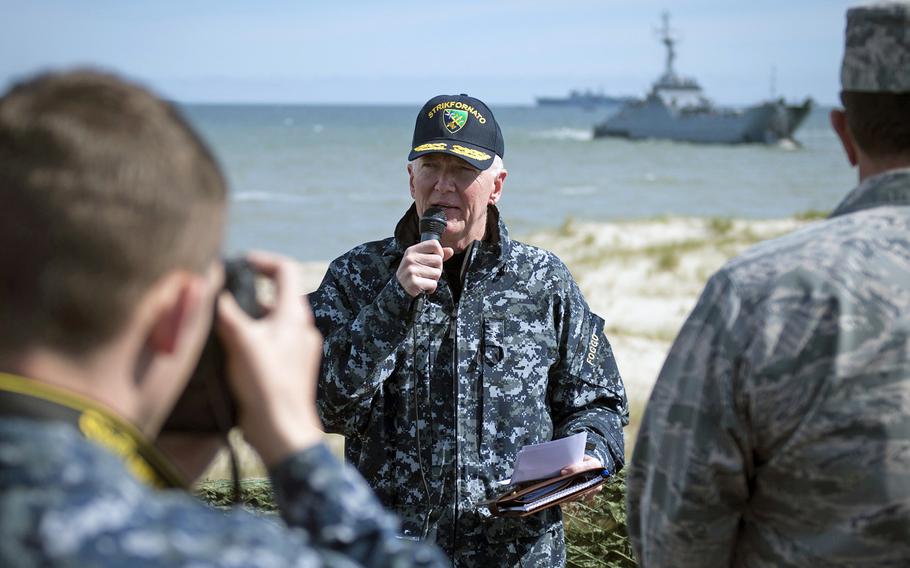 NAPLES, Italy — When he left the Navy’s 6th Fleet three years ago for a planning job at the Pentagon, then-Rear Adm. James Foggo III was fresh from U.S. and NATO air campaigns against the Libyan regime of Moammar Gadhafi.

“I thought we were really busy back then,” Foggo said in a recent interview. “Then I came back this time.”

Now with a third star on his lapel and full command of the fleet, the former submariner faces new threats that had yet to emerge in his last tour. Russia has grown more assertive, testing European boundaries in air, on water and undersea. The rise of the Islamic State group and the growth of Islamic militants in North Africa — the latter finding fertile ground in the vacuum of post-Gadhafi Libya — threaten European security and have contributed to a crush of migrants trying to enter the continent.

It’s an operational plateful for an officer who has spent the past two years in the Navy’s strategy chair, guiding concepts like Air-Sea Battle, which was designed to counter access challenges for military operations, and the new maritime strategy, intended to coordinate the Navy, Marine Corps and Coast Guard strategies.

Foggo was an eyewitness to Russian behavior at sea last month. During a major exercise in the Baltics, a pair of Russian Su-24s flew by his command ship, the USS San Antonio, now a common occurrence when U.S. and NATO ships are in the region.

The admiral says such maneuvers are provocative, even if they are in accordance with international standards. Russian unwillingness to communicate with U.S. ships at sea is also worrisome, he said, given the close proximity in which they operate.

So Foggo was surprised when a Russian navy delegation led by a vice admiral accepted an invitation to Naples last month for a discussion about safety at sea, under the umbrella of a Cold War agreement between the two nations, the Prevention of Incidents On and Over the High Seas.

“We expected they would come in, register a complaint and leave,” he said. “It was about six hours of discussion. It was hard-hitting, honest, robust and they got their points out, we got our points out and we continue to dialogue.”

Not much of that dialogue has filtered down to Russian ships, Foggo added, but communicating is better than not.

Russia’s growing submarine activity has concerned allies such as France, Britain and Sweden, he said. Although he declined to discuss American operations undersea, Foggo said that submarines rotating to 6th Fleet have been busy and that the fleet could use even more subs.

The lack of dedicated naval resources in Europe has been a common frustration to European commanders in recent years. The Mediterranean was a focal point during the Cold War, hosting a dedicated carrier strike group and amphibious ready group with embarked Marines.

Only in the past two years has it begun to receive dedicated warships again, though earmarked for ballistic missile defense. The fourth and final BMD destroyer to be stationed in Rota, Spain, the USS Carney, will arrive later this year, joining the USS Donald Cook, USS Ross and USS Porter. Those ships are still available for missions besides BMD, Foggo said, and they have often been called to fulfill the Navy’s monthly tour in the Black Sea.

The remaining piece for ballistic missile defense in the region, known as the European Phased Adaptive Approach, is the completion of interceptor sites in Deveselu, Romania, and Redzikowo, Poland.

The Romania site is expected to be ready by year’s end. And work has already started on the Poland site, which is slated to be ready sometime in 2018.

“Making that whole program come together and work is a top priority,” Foggo said.

The fleet also expects to receive one of the Navy’s high-speed catamarans, known as the Joint High Speed Vessel, sometime in 2016. Though not a warship, the shallow-draft cargo-and troop-mover is ideal for working with African nations. The first-in-class JHSV, the USNS Spearhead, has participated in the fleet’s premier African exercise, Obangame Express, two years in a row.

Africa continues to pose a challenge for the fleet, Foggo said, especially with the growth of militants in the north. The recent rocket attack against an Egyptian patrol vessel near the Sinai Peninsula, which was claimed by an Islamic State group affiliate, underlines the dangers in the region.

The continuing chaos in Libya has opened up smuggling routes toward Europe, sending tens of thousands of refugees across the continent fleeing.

“In the thousands and thousands of great people who come to the country, I remain concerned about small numbers of ISIS sympathizers slipping through,” Foggo said, using an alternative name for the Islamic State. “Where do they go, what are they going to do? So it’s a security problem for the continent.”

A big reason for North Africa’s upheaval, Foggo says, is the failed state of Libya, where Gadhafi’s fall has fueled violence in neighboring states and a civil war has left ungoverned spaces in Libya for groups like the Islamic State to grow.

Foggo believes U.S. and NATO actions over Libya were successful from an operational point of view, but he believes more should have been done in the aftermath of Gadhafi’s fall

“Where we made mistakes was we didn’t follow through,” he said.