Back from the brink, Baumholder shows signs of growth 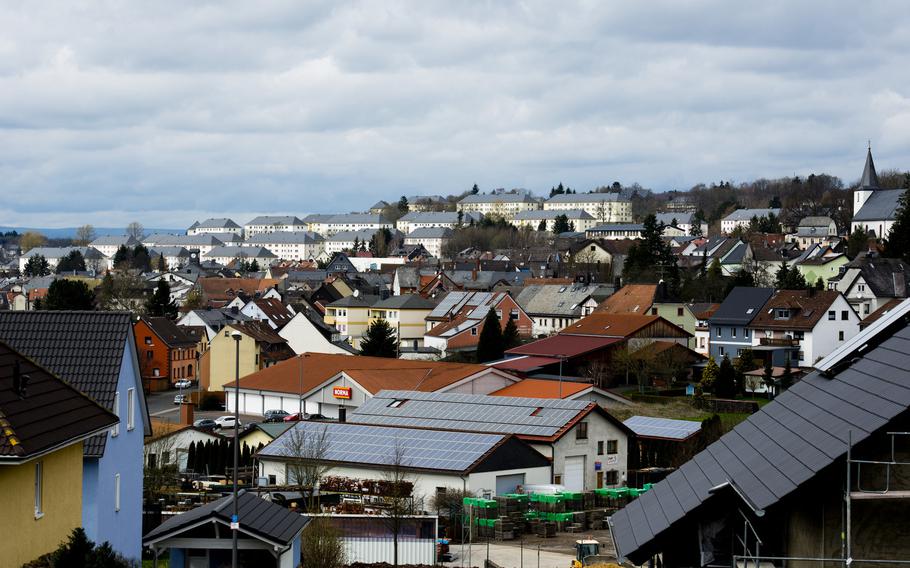 The U.S. Army Garrison Baumholder's Smith Barracks sits on the hill above Baumholder, Germany, seen here on Monday, April 4, 2016. After years of a decreased American presence at the garrison, steadily increasing troop numbers have led to several upgrade projects at the post. (Michael B. Keller/Stars and Stripes)

The U.S. Army Garrison Baumholder's Smith Barracks sits on the hill above Baumholder, Germany, seen here on Monday, April 4, 2016. After years of a decreased American presence at the garrison, steadily increasing troop numbers have led to several upgrade projects at the post. (Michael B. Keller/Stars and Stripes) 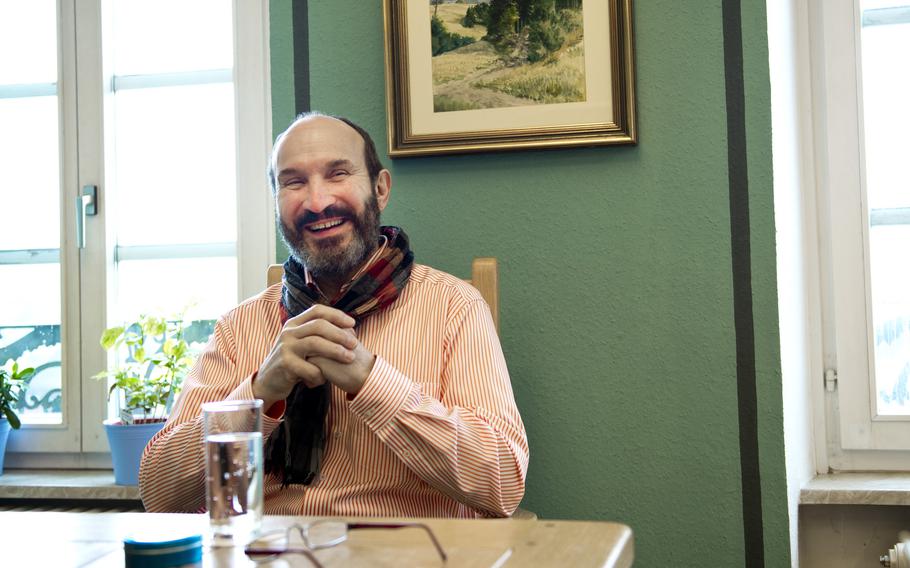 Guenther Jung, mayor of Baumholder, Germany, discusses the importance of the adjacent U.S. Army Garrison to the local community. The garrison employs 450 people in a region where there are not many jobs. (Michael B. Keller/Stars and Stripes) 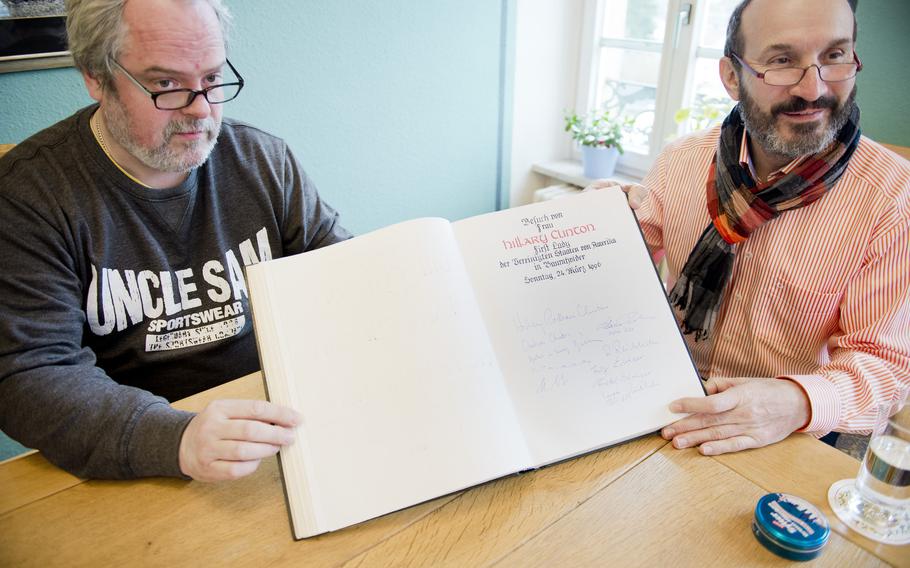 Guenther Jung, mayor of Baumholder, Germany, right, and Michael Roehrig, deputy mayor, display a guestbook signed by Hillary Clinton during her visit to the town hall as first lady in 1996. (Michael B. Keller/Stars and Stripes) 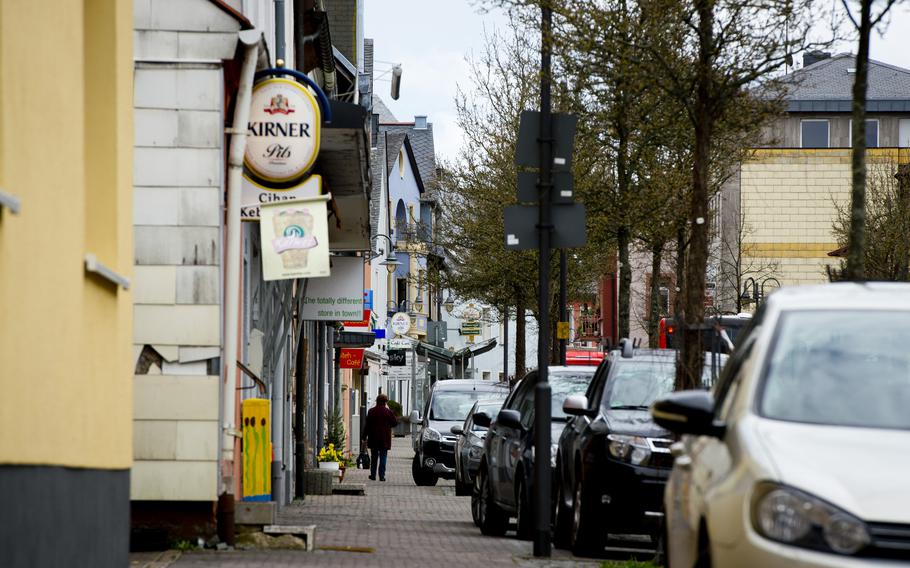 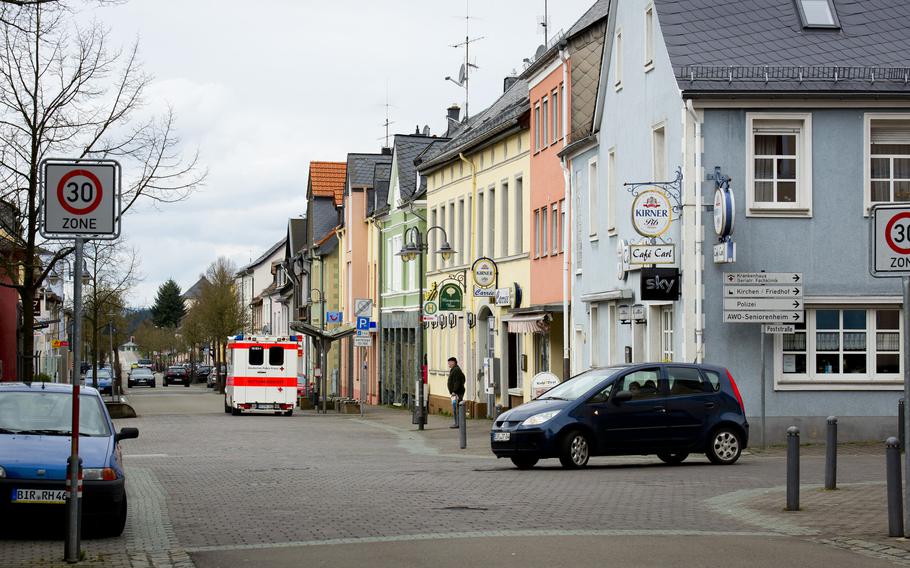 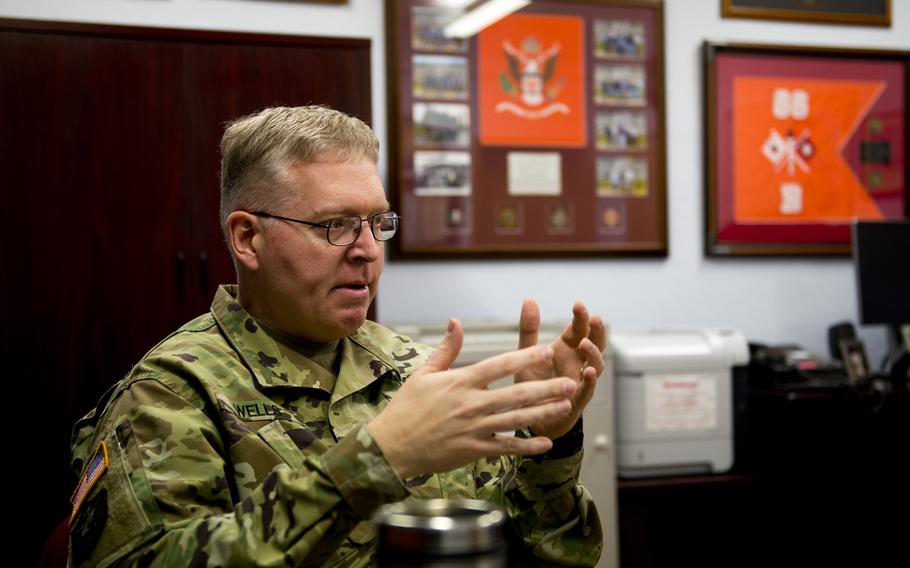 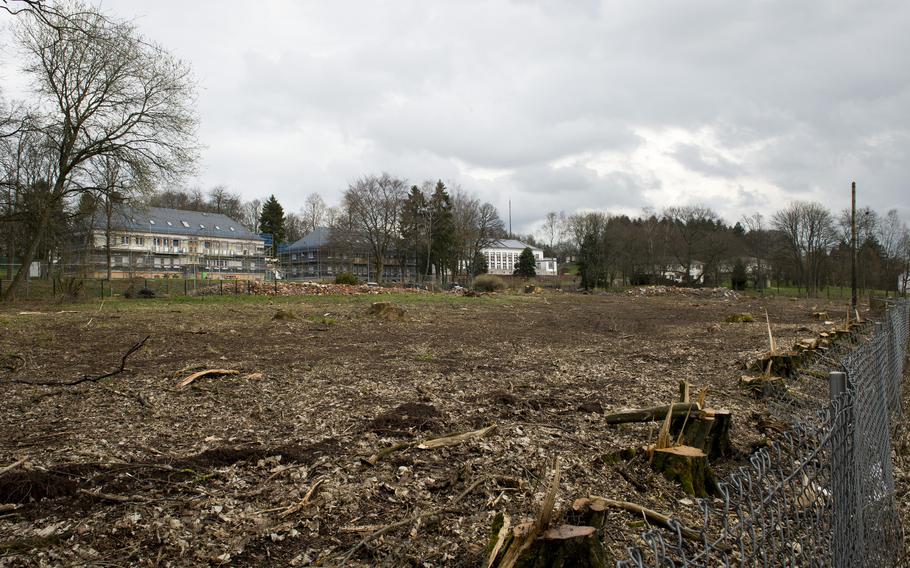 Several old barracks that would not have been cost effective to renovate have been cleared in Baumholder, Germany, to make room for housing needed for growing troop numbers. The demolished barracks are being replaced by 84 town houses for military families. (Michael B. Keller/Stars and Stripes) 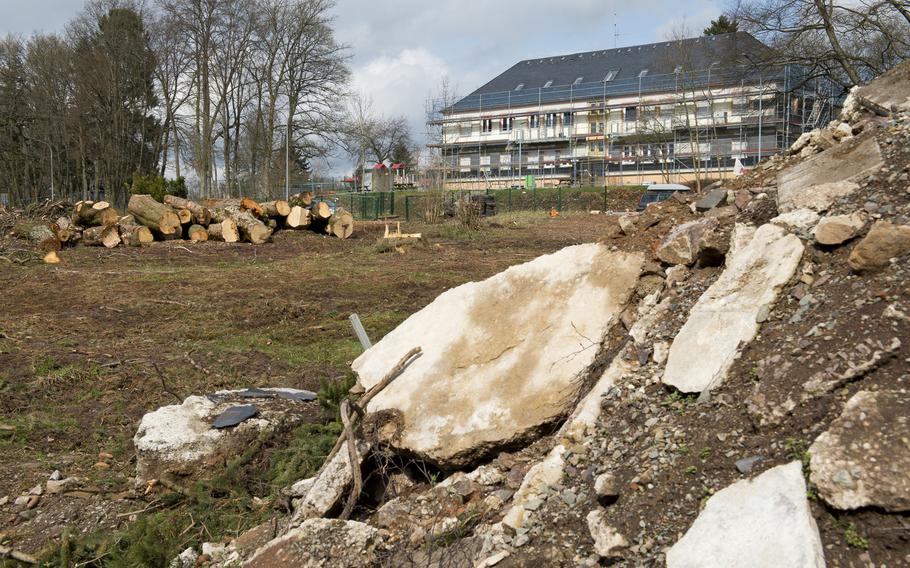 Renovation and demolition in Baumholder, Germany, has been underway for housing to accommodate growing troop numbers. (Michael B. Keller/Stars and Stripes)

BAUMHOLDER, Germany — During the old Cold War days, 30,000 Americans were garrisoned in this little hillside village, a place where young infantrymen far outnumbered locals and where the bar business was king.

But after years of decline there are signs that Baumholder is coming back to life, albeit very quietly. The Army here has quietly grown since the departure of the 170th Infantry Brigade in 2012, which practically emptied the garrison and struck fear into the heart of city leaders and business owners.

“This is always the biggest issue for us — what the Army’s future is in Baumholder. The U.S. Army provides jobs in our region, and in our region we don’t have many,” said Michael Röhrig, deputy mayor of Baumholder.

Except for the U.S. military, this little town located near Germany’s southwestern borders with Luxembourg and France has no other major employer.

Since 2012, new logistics, missile defense, and rotational units have been added to the Army post, where the American population is on the rise again. And there is even a hint of optimism among locals that the U.S. Army isn’t going anywhere anytime soon.

In 2008, the U.S. Army declared Baumholder one of its enduring communities in Europe, reversing an earlier plan to shutter the installation. But when the brigade left in 2012, taking with it 4,500 soldiers, the long-term prospects for the garrison and the community seemed bleak.

For 50 years, Americans outnumbers Germans in a town that has always relied on the Army’s presence for jobs and the economic ripple. But by 2013, the longstanding precedent changed when Baumholder’s 4,000 residents outnumbered the dwindling American population.

Now, Americans appear to slightly outnumber Germans again. There are 2,500 soldiers stationed in Baumholder with a total American population of roughly 4,600, according to Army officials.

For the area, that all translates into about 450 jobs for Germans, making the Army the town’s prime economic engine.

For its part, the Army has been busy sprucing up the post with a series of upgrades. Numerous old barracks buildings were recently demolished and will be replaced with 84 town houses for military families. Meanwhile, senior-level talks also continue about whether to relocate a group of special operations forces from Stuttgart, Germany, who would be able to take advantage of large training grounds in Baumholder.

Col. Shawn Wells, garrison commander for the Rheinland Pfalz region, said things are looking up for the Baumholder military community, where a network of tank trials and gunnery ranges have the potential to draw in more units for training.

“We have the capacity to build up there,” Wells said.

An added plus for Baumholder is the close ties between city leaders and the Army, Wells said. “No where will you find the reception that you have in Baumholder.”

When the ranges are quiet and there is no gunfire to be heard, the reaction isn’t one of relief. “It’s are you closing?” Wells said.

Still, street life in Baumholder remains a shell of its old self. At one time there were 50 bars downtown, which is an area about the size of a suburban neighborhood cul-de-sac. Now there are a handful of small pubs.

“What I hear from all the businesses in town is that it (American patronage) is still very small,” said Mayor Guenther Jung.

Winfried Korb, who runs a computer shop in town, said he gets the occasional visit from a soldier looking to get a laptop or smart phone repaired, but it is rare.

“It’s not many that come in. The town has changed a lot. It’s quiet now, but we kind of like that too,” said Korb, who worked on post for 20 years before starting his own business in 2000.

As for Baumholder’s long-term prospects, Jung thinks back to 1996 when then-President Bill Clinton, first lady Hillary and daughter Chelsea, made a visit to Baumholder to meet the troops.

At the time, Hillary and Chelsea made a stop at the old town hall and signed a guestbook. Jung, holding the book with the autograph, said he’s hoping for a Hillary Clinton presidency. After all, she may have fond memories of her visit and that wouldn’t be bad for Baumholder, Jung said. “It’s possible. It’s possible.”