Back from college, military kids reflect on stateside experiences 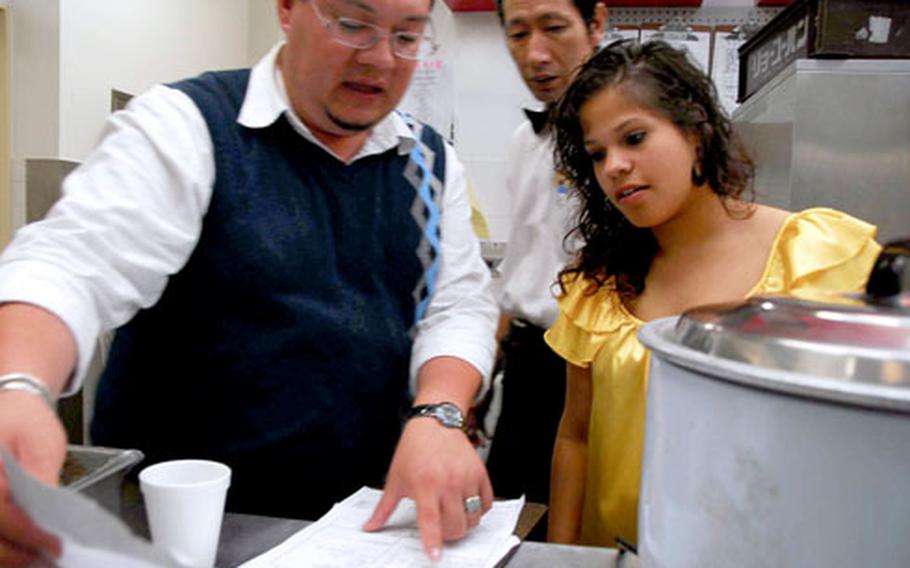 Carola Cintron-Arroyo gets some training from Luis Pena Jr., the catering manager of the Harbor View Club at Sasebo Naval Base in Japan. Cintron-Arroyo returned to Sasebo for the summer after her freshman year at Harvard University. (Travis J. Tritten / S&S)

SASEBO NAVAL BASE, Japan &#8212; Flush with ideas and independence, they found their way home this summer.

Overseas teens leave life on a military base and face college in the United States, often alone for the first time and far from family.

Teens get a potent taste of civilian life in college and then &#8212; a little older and wiser to the world outside the military &#8212; they return to far-flung bases for summer break.

Some find they are not so different from civilian college students or that life outside the military is not always fair.

They grow to miss family back home.

Gabriel Marquice Singletary, 18, said he worried a military upbringing would make him seem sheltered compared to other students at Savannah State University in Savannah, Ga., where he started college last year.

He&#8217;s majoring in biology and plans to become a dentist.

He said he assumed teens from outside the military were more mature and worldly.

The feeling of being different wore off, he said.

The 18-year-old, who is focusing on an English degree, said she became active in Hispanic groups on campus during her freshman year at Harvard University in Cambridge, Mass.

Friends at Harvard began to share stories of discrimination and hardship.

Cintron-Arroyo grew up in military communities with an enlisted Navy father and lived in Sasebo for her senior year of high school.

She said the idea of racial discrimination was foreign to her.

Cintron-Arroyo and Singletary both said growing up in the military &#8212; around many different ethnicities &#8212; made them more outgoing and the transition to college easier.

Life was not always so smooth for other minorities.

College is a chance for military teens to step outside of the structure and support that permeates military life.

That joy of freedom can also come with a cost.

Schooling in the States often means leaving family behind, sometimes in time zones that make even regular phone calls a task.

Megan Linder, 18, who is interesed in pursuing a communications degree, said she was quickly accepted by other students at Southeastern University, a Christian school in Lakeland, Fla.

But she was torn over leaving her family in Lakenheath, England, where her mother was stationed.

Family drew Linder, Cintron-Arroyo and Singletary back to Japan, to the small communities they had left behind for an exciting new life in the U.S.

Linder said that, in a way, it was nice to be back for a summer.

Plus, her summer trip to Japan impressed her new group of college friends.