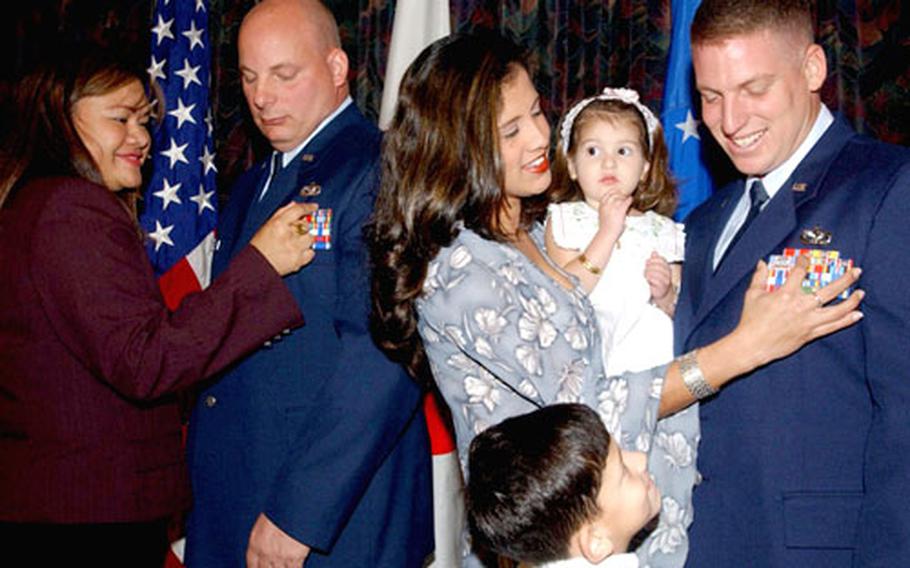 KADENA AIR BASE, Okinawa &#8212; Few people who join the Air Force ever envision becoming used to bombs exploding around them.

Bronze Star Medal recipients Tech Sgts. Michael Powers and Richard Snider were no different until this year, when they left with 28 airmen with the 18th Logistics Readiness Squadron for Balad, Iraq.

After a few months of commanding convoys, Snider would radio in the words &#8220;contact left&#8221; &#8212; meaning a roadside bomb just had exploded nearby &#8212; with the nonchalance of someone asking for the table salt.

After more than 70 convoy runs from Kuwait to Mosul and places in between, if no one was hurt and the vehicles kept moving, the fireballs began to blend into the scenery.

Snider didn&#8217;t feel that way when he first arrived.

Snider eased into the routine of war at the start of his six-month tour, before taking part in about 10 convoys struck by bombs.

About 20 minutes into his first run as convoy commander, his convoy got hit by a bomb.

When the bombs go off

Powers and Snider say their Air Force detachment&#8217;s convoy experience soon gave them a reputation as go-to-guys. After two months, they were selected to train incoming Army teams. That experience didn&#8217;t make their convoy runs any cushier.

Snider&#8217;s convoy just had passed a checkpoint near Beiji in north-central Iraq last summer when a blue fireball erupted 10 feet in front of his vehicle, spitting shrapnel horizontally.

While securing the convoy, an airman in the rear gun truck spotted detonation cord burning across the highway. The daisy- chained cord set off flares Snider suspects were a decoy to trap a convoy into stopping at the bomb they&#8217;d hit.

The shrapnel struck the civilian convoy commander of a KBR contractor&#8217;s truck. About 4 inches of his lower leg disappeared &#8212; and Snider&#8217;s pre-deployment emergency training flashed back. He radioed for help and called in fighter planes to locate the insurgents responsible as convoy personnel applied a tourniquet to staunch the wounded civilian&#8217;s bleeding. &#8220;Last I hear, he was back at home,&#8221; Snider said. &#8220;They were grafting skin and bone on to his leg.&#8221;

Losing an airman or civilian in their commands always was their biggest fear, both sergeants said. Powers almost faced that fear coming from a remote base in northern Iraq, west of Mosul.

Villagers &#8220;took a good look at the convoy on the way up,&#8221; he recalled. The convoy rolled out at night down &#8220;Reno,&#8221; a pothole-heavy support road where bombs had gone off in the past. Before it was halfway to Mosul, a bomb blew the side off one of its 5-ton trucks. Almost at once, another explosion pockmarked a contractor truck with shrapnel.

Fortunately for the entire convoy, neither truck was disabled.

&#8220;Go, go, go!&#8221; Powers repeated, commanding the convoy out of the kill zone. His philosophy on attacks was clear: If the wheels are still attached, keep driving.

As they sped from the village to barren desert, the truck in front took the convoy&#8217;s third bomb blast. Waves of dirt and rock blotted out Powers&#8217; front windshield.

The convoy regrouped two miles later. Despite damaged sheet metal and cratered armor, no one was seriously injured.

They were fortunate in that, Powers said: Their remote location ruled out medical evacuation. &#8220;We drove about 128 miles before we had communication.&#8221;

Powers&#8217; and Snider&#8217;s actions in their convoys resulted in Bronze Star Medals. But their performances weren&#8217;t the only ones decorated. Each of the 18th Logistics Readiness Squadron&#8217;s 28 deployed airmen received an Army Commendation Medal.

Convoy duty never eased for either Powers or Snider, right until their flight took off for Kuwait.

He came home to see his 2-year-old daughter &#8212; barely standing when he left &#8212; walking with his wife when they greeted him at the airport.

Powers returned to meet his newborn son, Michael Christopher, for the first time.

Powers and Snider now have reclaimed their normal lives on Kadena. But neither views their job the same as before deploying.

The two Bronze Star Medal recipients even have adopted a new motto they pass on to airmen about to deploy: Semper Gumby.