Babylon an oasis for troops 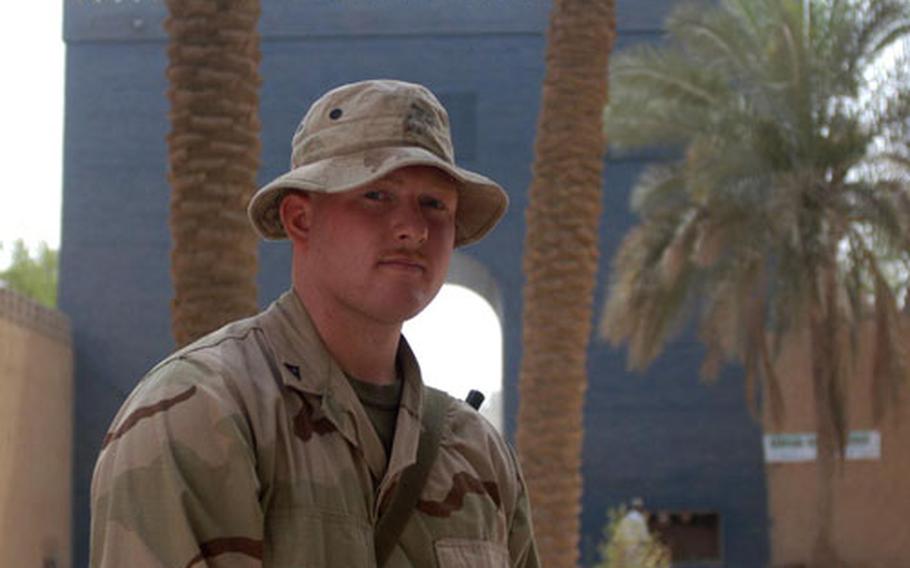 Lance Cpl. Scott Baker, a truck company reservist from Tarentum, Penn., attached to the 1st Marine Division in Iraq, stands inside a replicated Ishtar Gate — the original is in Berlin — the entrance to Babylon. He&#39;s seen the ruins of Babylon twice. (Juliana Gittler / S&S)

CAMP BABYLON, Iraq &#8212; It&#8217;s not a resort, and uniforms and weapons are still required, but for some servicemembers in southern Iraq, a day of rest at Camp Babylon in Hilla is a welcome reprieve from the monotony of life in Iraq.

&#8220;It&#8217;s a break; you come over here and learn about history,&#8221; said Marine Sgt. Michael Meisenhalder, with the third platoon of Company I, 3rd Battalion, 5th Marine Regiment, based in nearby Diwaniyah.

Camp Babylon, the 1st Marine Expeditionary Force headquarters, has some rare finds for a military camp in the region: a pool, good chow, washers and dryers, one of Saddam Hussein&#8217;s grandiose palaces and the ruins of Babylon, the ancient city of biblical fame, conquered repeatedly through history.

The ruins aren&#8217;t much, and Saddam&#8217;s attempt at reconstruction might make an archaeologist cringe, but the mystique of the place is still attractive.

Lance Cpl. Gibson Mitton, with the battalion weapons platoon, said the day was a break from the rigid schedule most infantry Marines have followed since combat action ended in Iraq. Patrol, guard, patrol.

Army Sgt. Thomas Coleman, a New York Army National Guardsman with the 442 Military Police from Newburgh, N.Y., was on a break from life at Camp Smitty in Samawah, Iraq.

He visited the ruins and the bazaar outside the gate, then planned to head over to the pool.

The bazaar was like others he&#8217;s seen in Iraq, but much more orderly.

Down time in Iraq

The Marines, along with 150,000 other U.S. servicemembers still working in and around Iraq, have been away from home longer than most sports seasons. They wonder who won hockey&#8217;s Stanley Cup and what are the latest public scandals.

In the desert, mail comes slowly and CDs stop working after a few playings, a product of heat and the ever-present sand.

Lance Cpl. Tyrone Singleton Jr. from Cleveland and a member of the same company, misses little things Americans take for granted: &#8220;Being able to flush a toilet.&#8221;

He can&#8217;t wait to get home to spend his hard-earned combat cash.

There are also the nontangibles left behind. Petty Officer Third Class Kevin Warnock, a Navy corpsman, from Cleveland, misses his dog and his civilian job as a paramedic. His battalion of reservists left behind jobs, college and loved ones.

Singleton, like many servicemembers, misses his family the most. He hasn&#8217;t seen his 2-year-old daughter since Jan 2.

Despite the separation and disconnection, the Marines say they have learned from the experience being in Iraq.