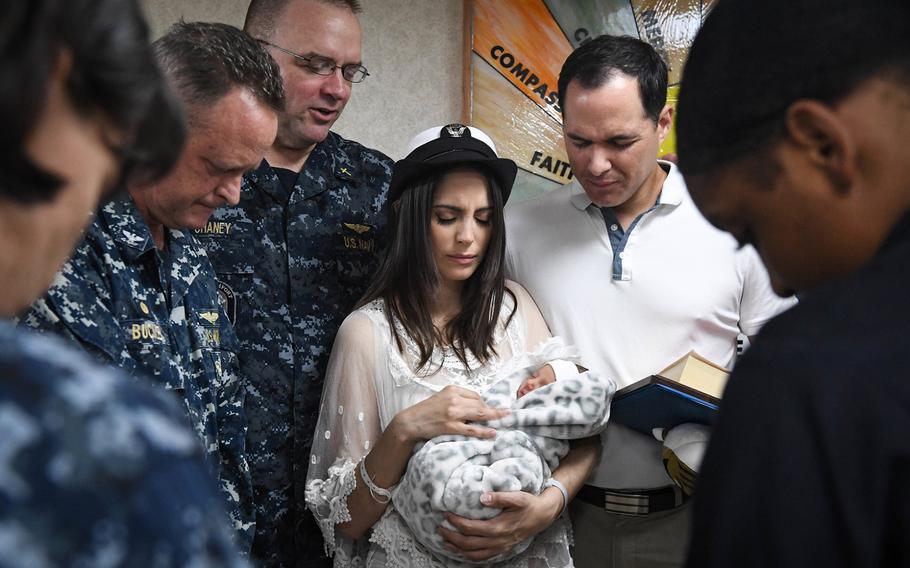 Tania Rodriguiz Ramos holds her baby Sara Victoria Llull Rodriguiz, as sailors aboard the Military Sealift Command hospital ship USNS Comfort (T-AH 20) say a prayer. The infant was the first child born aboard the Comfort in more than seven years. Ramos was evacuated to the ship when she was unable to get adequate medical care on Puerto Rico after Hurricane Maria devastated the island. (Ernest R. Scott/U.S. Navy)

WASHINGTON — Tania Rodriguiz Ramos was pregnant and due any day as Hurricane Maria barreled toward Ponce, the second largest city on Puerto Rico located on the southern coast of the island.

Puerto Rico suffered catastrophic damage to its electrical power and health infrastructure from the storm when the hurricane made landfall Sept. 20. Ponce was ravaged with massive flooding that left the local hospital severely overcrowded when Ramos arrived there for a scheduled doctor’s appointment to plan for the delivery of her baby.

Unable to receive care in Ponce, Ramos was evacuated to the hospital ship USNS Comfort due to the impending birth of her child.

On Saturday, Sara Victoria Llull Rodriguiz was born, weighing 6 pounds, 8 ounces, Navy officials said. Ramos had been aboard the Comfort for five days and she and her daughter were discharged Tuesday, according to the Navy.

The Comfort arrived in Puerto Rico on Oct. 3 as part of the federal response to the widespread destruction. Basic necessities such as food, water and medical care are still difficult to access, despite more than 13,000 military and federal personnel, nearly 100 aircraft and Navy ships such as the Comfort responding to the crisis.

But despite U.S. response and the success of Sara’s birth, getting patients from Puerto Rico aboard the ship for medical treatment has been difficult.

The Comfort is a Level III ocean-going medical facility capable of initial treatment, surgical operations and post-operative care. Its mission, along with its sister ship USNS Mercy, is to support combat military casualties and provide medical services during humanitarian and disaster relief operations. The ship has 250 hospital beds, but only 33 are being used, despite being positioned off Puerto Rico’s coast for two weeks, said Lt. Cmdr. David Lloyd, a spokesman for the Comfort.

Comfort mission commander Capt. Kevin Robinson told CNN that they have the capacity but are waiting for Puerto Rican health officials to forward them more patients.

“Every time that we’ve been tasked by (Puerto Rico’s) medical operation center to respond or bring a patient on, we have responded,” he said.

Puerto Rican Gov. Ricardo Rosselló said in the CNN report that there is a serious breakdown in communications and that referrals to the Comfort will improve.

“I asked for a complete revision of that so that we can now start sending more patients over there,” he said.

“The breakdown was in the original protocol,” Rosselló said in a video conference Tuesday with CBS. “Whatever was acute and was sort of an overflow would go to the boat. In my estimation that was really not the best use of the Comfort. We really need to maximize the use (of the Comfort).

“The hospitals have to play more of a role in this, allowing and facilitating patients to go,” the governor said in the video, acknowledging the widespread confusion of the referral process to get patients access to the hospital ship.

The Comfort’s first mission was Operation Desert Storm in 1990 and the ship has been involved in multiple humanitarian missions including the aftermath of the 2010 earthquake in Haiti, which was the last occasion a woman gave birth on the ship. The ship was also activated for Operation Noble Eagle in the aftermath of the 9/11 attacks, helped respond to Hurricane Katrina and was deployed during Operation Iraqi Freedom.

“We stood up the labor and delivery ward prior to getting underway,” said Lt. Karri Washbon, a labor and delivery nurse aboard Comfort who assisted with Sara’s birth. “We expected to see a lot of patients, but we weren’t sure how often we’d get to utilize this aspect. With every birth, there is a unique story and we are glad to be a part of their experience. Now everyone just wants to see the baby!”

Sara’s 6-year-old brother Alonzo and 4-year-old sister Sofia stayed with family on the island during their baby sister’s birth, and Ramos was eager to get back to Puerto Rico to see them again, despite poor conditions in Ponce.

“They are so excited to meet her,” Ramos said. “I got the chance to call my family and let them know that I am OK and that the baby is healthy and happy. It’s a huge blessing for Sara to be here. I owe everything to the doctors and nurses and everyone on board.”