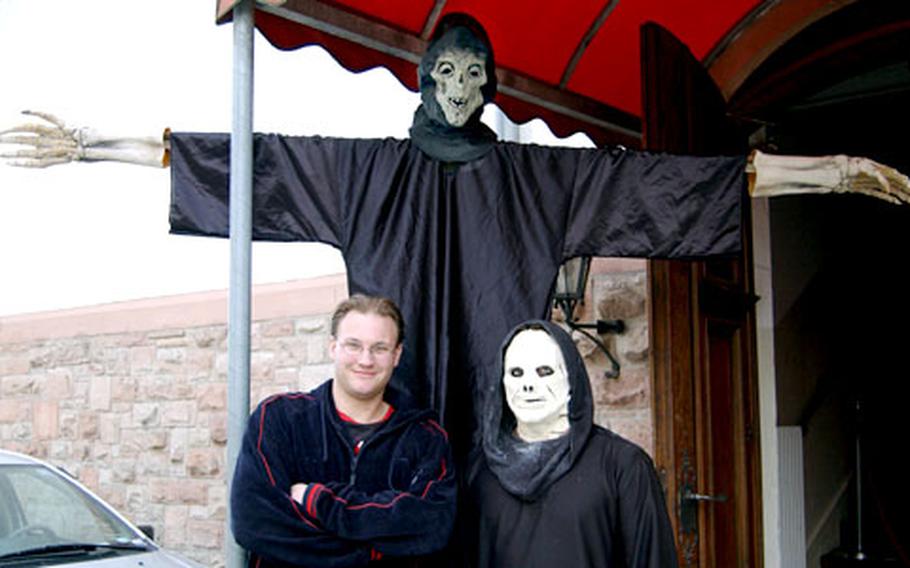 BABENHAUSEN, Germany &#8212; For a Halloween enthusiast like Capt. Jon Libbesmeier, being stationed at Babenhausen Casern is like his best nightmare.

Libbesmeier and Spc. Todd Roberts have teamed up again to organize this year&#8217;s haunted house. It is the casern&#8217;s largest yet, beginning in Building 4510, continuing through a second building and ending in the Cannoneer Club.

The haunted house is linked to the story of Helga M&#252;ller, one of 50 women accused of witchcraft in the 1600s in Babenhausen and later burned alive in the town&#8217;s market square.

M&#252;ller&#8217;s home is said to have been in the general area of where the casern&#8217;s Cannoneer Club and the 41st Artillery Brigade Headquarters building now stand.

&#8220;You hear a lot of people say that they hear crying sounds or screams every now and then from those two buildings in particular &#8230;,&#8221; Libbesmeier said.

One theory is the screams belong to a French soldier who jumped to his death from the headquarters&#8217; attic in 1920. Another is that they are from five missing soldiers whose bodies were discovered on the grounds. Their deaths were never explained.

Libbesmeier said, &#8220;It turns out that the guy who committed suicide had been telling everybody that he had been engaged to a girl who worked at the casern, and whose name was Helga M&#252;ller&#8221; &#8212; the same name of the woman burned in the 17th century.

After finding that all the doors were closed, the two returned to the basement to see the sheets still moving. Through the fabric, they witnessed a pair of hands dragging along the sheet.

Despite what he feels are close encounters with the supernatural, Roberts returns to the basement for the haunted house year after year.

Inside this year&#8217;s haunted house are ghosts, goblins and figures representing Frau M&#252;ller. There is even one surprise when the mysterious woman comes to life.

The Babenhausen Haunted House, which opened last weekend, will be open for its last night Friday from 7 p.m. to midnight. Admission is free.