‘Baba Noel’ has a following in Iraq Staff Sgt. Victor Settles, a surgical technician at Ibn Sina Hospital in Baghdad&#39;s Green Zone, poses with one of the young Iraqi patients at the hospital. (Photo Courtesy Victor Settles)

Staff Sgt. Victor Settles, a surgical technician at Ibn Sina Hospital in Baghdad&#39;s Green Zone, poses with one of the young Iraqi patients at the hospital. (Photo Courtesy Victor Settles) 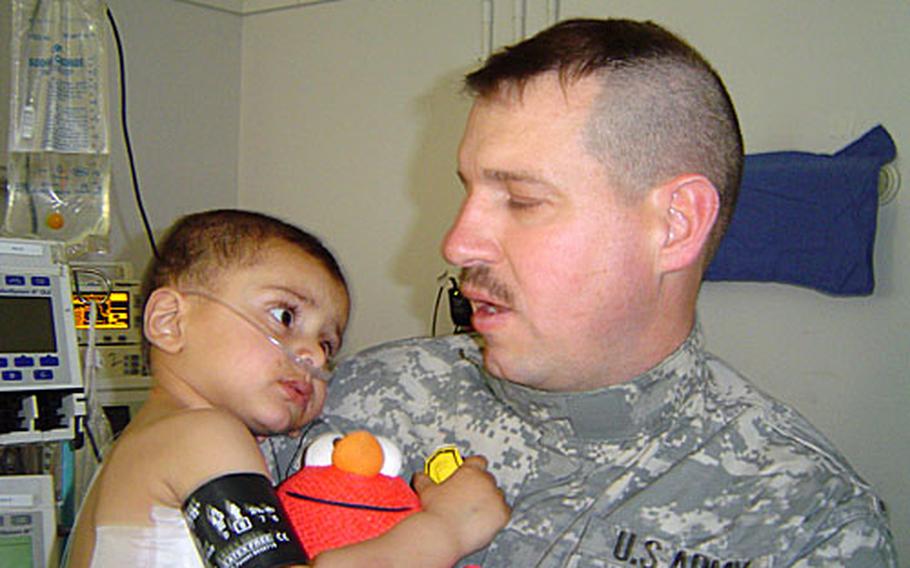 Settles holds one of the small patients at the hospital, who in turn holds one of Settles&#39; toy donations. (Photo Courtesy Victor Settles) Settles poses with some of the kids to whom he gives donations of toys, school supplies and other treats. (Photo Courtesy Victor Settles)

When he has free time, Staff Sgt. Victor Settles grabs stuffed animals, crayons, puzzles and other donated playthings and piles them into a big buggy.

He throws in an electric keyboard. Then he strolls over to certain neighborhoods in the Green Zone.

Familiar faces come out to say hello. Boys and girls admire the toys and line up to receive them.

He plays the keyboard. The kids sing into a microphone and giggle.

Settles, 34, a surgical technician at Ibn Sina Hospital in the Green Zone, has three boys and two girls back home in San Antonio.

Settles, or &#8220;Baba Noel&#8221; as the Iraqi children call him, gets toys through military-support organizations and from individuals. He tends to get backpacks from Soldiers&#8217; Angels, Beanie Babies &#8212; which Iraqi children collect, just as kids have done in the States &#8212; from Operation Care Package and CD players from A Soldier&#8217;s Wish List.

He e-mails donors photos of kids with the toys to reinforce the feeling that they&#8217;re helping.

The choicest toys go to the kids who are patients at Ibn Sina.

Every child seen recently at the hospital was holding some sort of goody.

That night, he got 30 backpacks in the mail.

Soldiers sometimes go out with Settles when he makes his rounds. &#8220;Parents are out there, watching and smiling,&#8221; said Alford, who is attached to the hospital. &#8220;Even in a bad situation, people need to feel you are doing them no harm.&#8221;

Their cell phones might have an Usher tune as a ring tone.

He has a big e-mail list of donors and he says he doesn&#8217;t need anything more.

Other groups and people are giving out toys to Iraqi children, too.

But Settles has a soft spot for child patients at Ibn Sina. One of his daughters has had thyroid cancer, so he knows what it&#8217;s like for children to be in the hospital.