B-52 squadron commander is removed for leadership failure 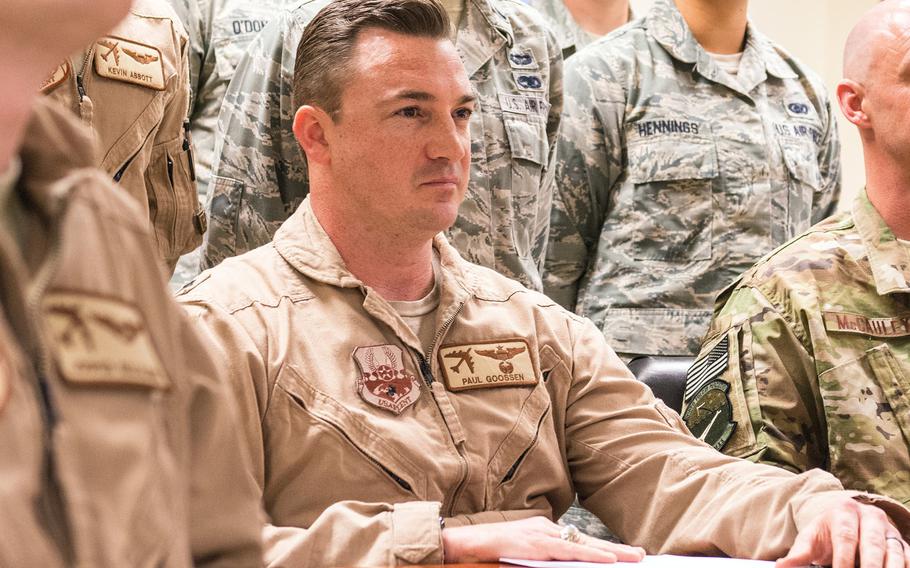 Lt. Col Paul Goossen and other servicemembers take part in a holiday conference call with President Donald Trump at Al Udeid Air Base, Qatar, Dec. 24, 2017. Goossen was removed from command of the 69th Bomb Squadron due to a loss of trust and confidence from his failure to maintain a professional workplace environment. (Patrick Evenson/U.S. Air National Guard)

Lt. Col. Paul Goossen, commander of the 69th Bomb Squadron at Minot Air Force Base, was removed from command Tuesday for failure to maintain a professional workplace environment.

Maj. Natassia Cherne, a wing spokeswoman the North Dakota base, confirmed Goossen was relieved Tuesday morning. The decision was made by Gen. Timothy Ray, commander of Air Force Global Strike Command, she said.

Cherne said Goossen was the subject of a commander-directed investigation by his boss, Col. Bradley Cochran, commander of the 5th Bomb Wing. That investigation concluded on Oct. 31.

Cherne did not have specifics about the probe but said it was not a criminal investigation. Goossen was “removed from his position solely because of his failure to maintain a professional work environment,” she said.

Commander-directed investigations are administrative in nature. Commanders may initiate a probe to look into and correct problems within their command, usually either systemic ones or those pertaining to individual conduct or responsibility, according to Air Force guidance.

Goossen took over command of the 69th Bomb Squadron in Dec. 2017, Cherne said, adding that he will be reassigned to another position at Minot until he’s due to transfer to another duty location.

Lt. Col. Dennis Zabka, the 5th Operations Support Squadron director of operations, assumed command of the squadron on Tuesday. The squadron has about 90 airmen.

The 69th is one of two B-52 bomber squadrons at Minot.