B-52 lands on Cold War enemy's airfield for show 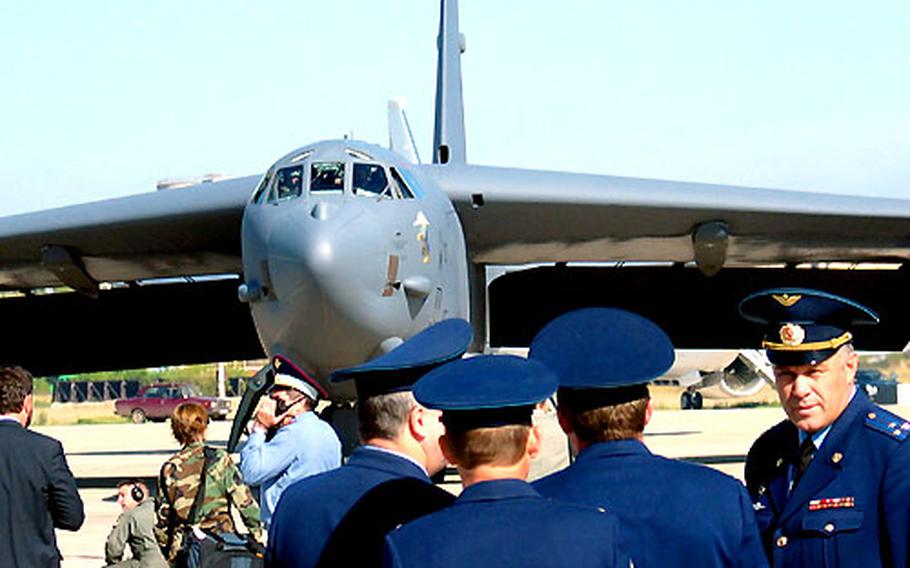 Russian air force officers watch a U.S. B-52 Stratofortress bomber park after landing Wednesday at the sixth Moscow Space and Aviation Show. The B-52 is among 200 aircraft from around the world on display. (Kenneth Fidler / Courtesy USAF)

RAMENSKOYE AIRFIELD, Russia &#8212; One of the most famous Cold War icons, the B-52 Stratofortress strategic bomber, landed in Russia on Wednesday morning to participate in the sixth Moscow Space and Aviation Show this week.

&#8220;For half of my career, I never thought I would be standing here watching American airplanes land on this airfield,&#8221; said Col. Stephen Mueller, commander of the 52nd Fighter Wing at Spangdahlem Air Base, Germany, and commander of the U.S. military mission at the air show. Mueller is also an F-16 pilot.

It is the first time a B-52 and other U.S. military aircraft have been in Russia on public display, but it was the second B-52 to fly into Russia.

The first occurred in the early 1990s on a military visit, but it was not put on public display.

Other U.S. military aircraft on display among the 200 aircraft from around the world are the F-16 Fighting Falcon, F-15E Strike Eagle, KC-135 Stratotanker, and C-130 Hercules.