B-52 exercise ends on Guam 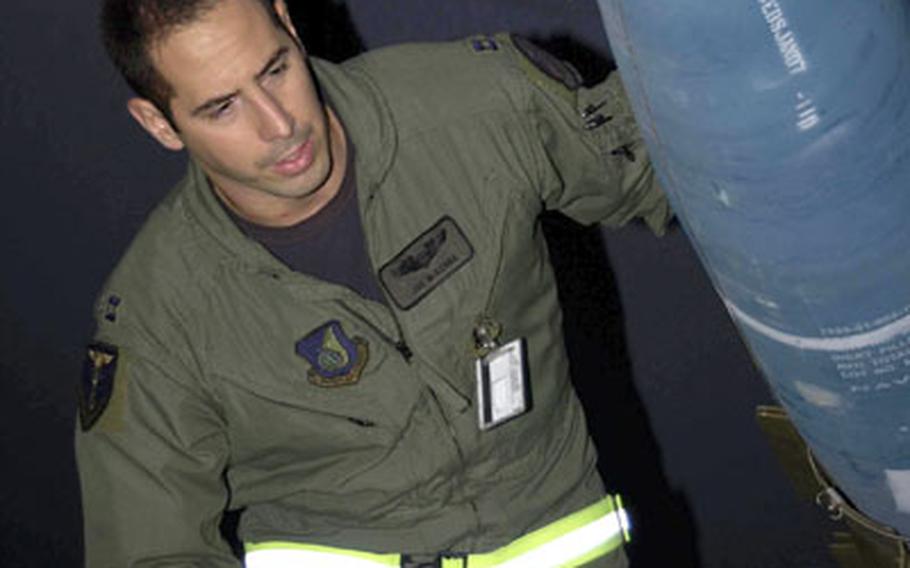 Capt. Joseph McKenna, a B-52 radar navigator assigned to the 23rd Expeditionary Bomb Squadron, checks a Mk-62 “Quickstrike” inert aerial mine prior to takeoff on a counter-sea exercise mission. (Courtesy of the U.S. Air Force)

The Air Force completed a five-day exercise at Andersen Air Force Base on Guam last week, using B-52s to practice target precision 1,000 feet over the sea, according to the 36th Expeditionary Operations Group.

The 23rd Expeditionary Bomb Squadron of Minot Air Force Base, N.D., conducted the operation, according to the group&rsquo;s public affairs office.

During the five days, the bombers dropped 100 inert Mk-62 &ldquo;Quickstrike&rdquo; mines into the Pacific Ocean over the Marianas Trench from 1,000 feet.

&ldquo;I think every crew chief looks forward to launching our B-52s for these types of missions and the air crews trust us to provide them with a mission-ready aircraft,&rdquo; said Staff Sgt. Christopher Downs, a crew chief assigned to the 36th Expeditionary Aircraft Maintenance Squadron, according to a report from the public affairs office. &ldquo;The weapons crews did a good job with the inert mines and it made our jobs pretty easy.&rdquo;

The bombers also worked with the 506th Expeditionary Air Refueling Squadron from MacDill and Grand Forks Air Force bases to practice refueling during the exercise. The bombers would leave Andersen, refuel in the air, then begin their bombing runs.

Before dropping any bombs, the pilots would pass over the target area to ensure no unauthorized surface vessels were present.

&ldquo;We actually had a couple of ships that looked like they were heading into the mining area,&rdquo; said 1st Lt. Patrick Godinez, a B-52 electronic warfare officer assigned to the 23rd EBS, in the report. &ldquo;We took a look at them and then made sure they left the area before we started our run.&rdquo;

The exercise concluded a five-month deployment to Andersen during which the 23rd EBS flew more than 200 missions, logged almost 1,600 hours and dropped 750 munitions.