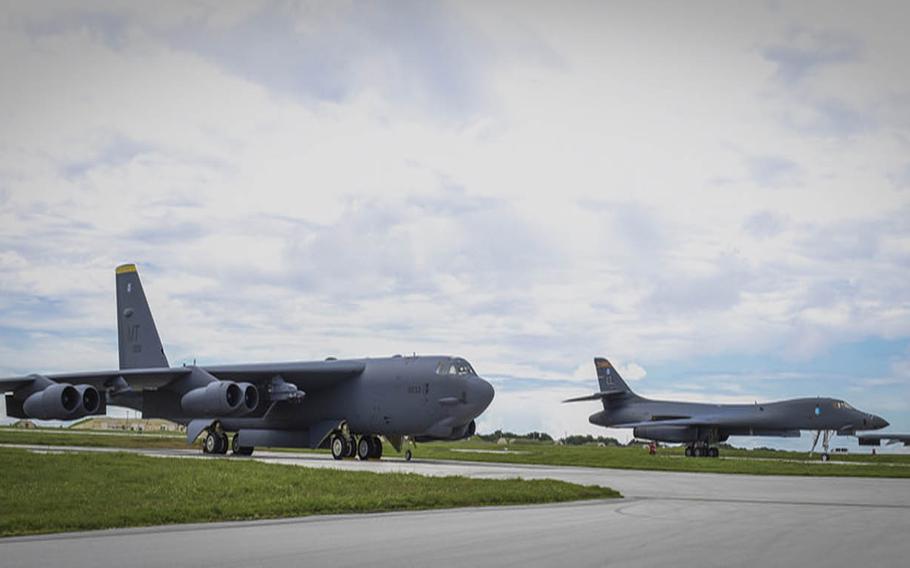 A B-52 Stratofortress, left to right, B-1 Lancer and B-2 Spirit share the flight-line at Andersen Air Force Base, Guam, Wednesday, Aug. 10, 2016. Secretary of the Air Force Deborah Lee James said this marks the first time in history all three bombers have been in the U.S. Pacific Command area of responsibility at the same time. (Courtesy of U.S. Pacific Command)

B-52, B-1 and B-2 bombers are sharing the tarmac at Andersen Air Force Base, Guam — the first time the aircraft have been inside U.S. Pacific Command territory simultaneously, according to a tweet by Secretary of the Air Force Deborah Lee James.

Three B-2 Spirit stealth aircraft — America’s most advanced bomber, capable of delivering both conventional and nuclear munitions — arrived Wednesday from Whiteman Air Force Base, Mo., for a short deployment to train in the Pacific as part of U.S. Strategic Command’s bomber operations.

An undisclosed number of supersonic, low-flying B-1 Lancers from Ellsworth Air Force Base, S.D., landed at Andersen over the weekend to replace the base’s aging fleet of B-52s deployed from Minot Air Force Base, N.D. The B-1 can fly more than 900 mph and carry more than 75,000 pounds of munitions.

“I think this deployment is extremely important,” Lt. Col. Seth Spanier, 34th Expeditionary Bomb Squadron commander, said in an Air Force statement. “The Pacific is going through a time of increasing instability and tensions. I think bringing the men and women of our B-1s to the area … will provide that visible assurance to our allies and partners.”

So far, the handoff between the B-1s and the B-52s has been seamless, Spanier said.

“I think that really pays credence to the amount of integration the bombers have been doing lately across the Air Force,” he said.

The deployments come ahead of annual U.S.-South Korean war games that North Korea claims are preparation for an invasion and less than a week after the communist country simultaneously fired two intermediate-range ballistic missiles.

The North has conducted about a dozen missile tests since spring in the face of harsher U.N. sanctions imposed after its fourth underground nuclear test in January and a long-range rocket launch a month later.