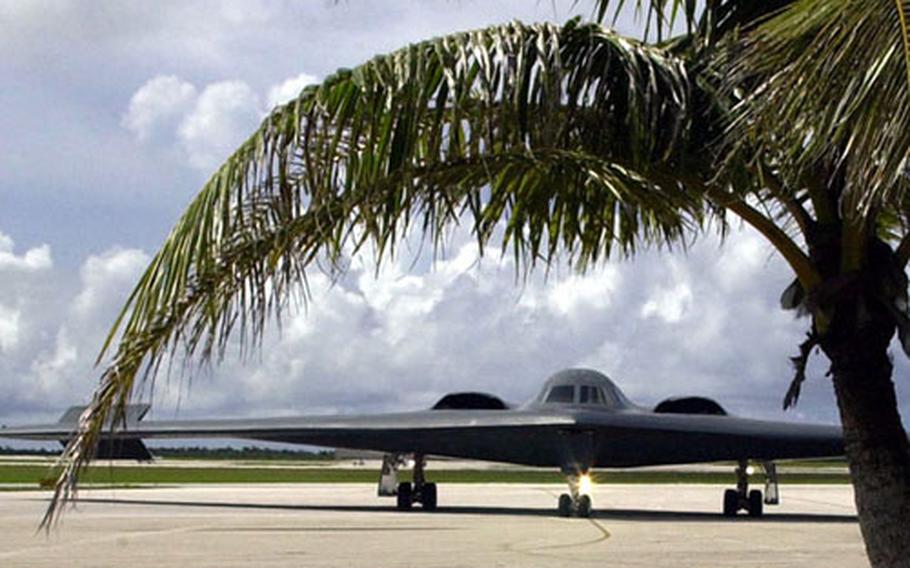 The B-2 Spirit of Kitty Hawk taxis into place on the palm tree-lined flightline at Andersen Air Force Base, Guam, Sept. 17 after an 18-hour flight from its home at Whiteman Air Force Base, Mo. (Courtesy of USAF)

The Air Force&#8217;s stealthiest fliers were at Andersen Air Force Base, Guam, last week to test their ability to strike targets thousands of miles away.

The U.S. military leases the island from Commonwealth of the Northern Marianas Islands and uses it as a bombing range.

The bombers dropped inert, 2,000- pound, joint direct-attack munitions, Gulick said. The weapons are guided by a global-positioning system and moveable fins to strike within 24 feet of their targets.

&#8220;We&#8217;re getting our people used to forward deploying and setting up a base from scratch to be able to operate these aircraft,&#8221; Gulick said.

The crews practiced a quick turnaround: A day after the first aircraft arrived Wednesday, it flew three missions, Gulick said.

The second B-2 arrived Thursday, and both planes were to fly three missions Friday.

Andersen Air Force Base is a strategic military location in the Pacific and would possibly serve as a forward-deployed B-2 base in the event of a contingency in the region, Gulick said. The base is one of five forward-deployed, operating locations for B-2s worldwide.

The bombers and crews were expected to start leaving Guam on Sunday, Gulick said.