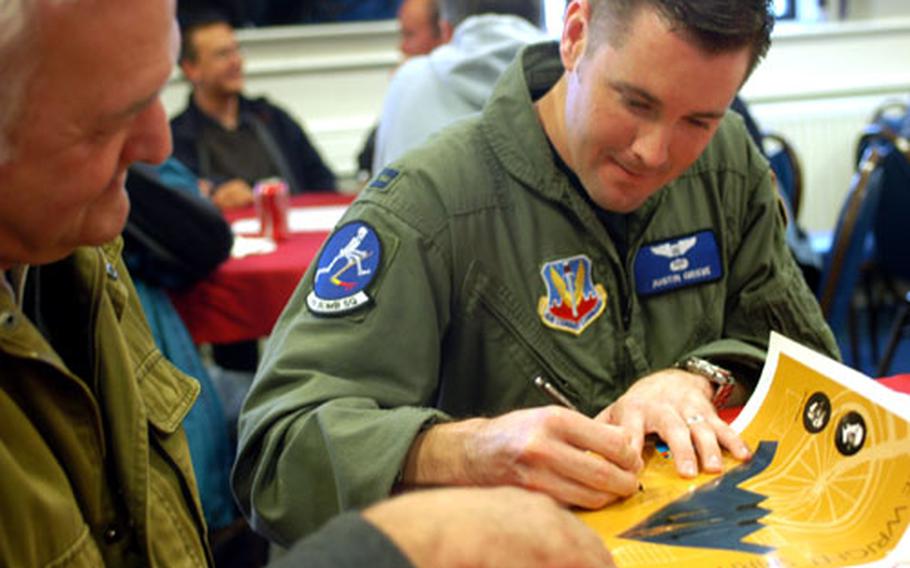 Capt. Justin Grieve signs a B-2 Spirit poster for Dennis Feltham, left, Wednesday at RAF Fairford. Grieve, a member of the 13th Bomb Squadron from Whiteman Air Force Base, Mo., recounted his miraculous ejection in from the stealth bomber in February during lunch with Feltham and other members of the Fairford Aviation Society. (Charlie Reed / S&S)

Capt. Justin Grieve knew something was wrong as soon as the B-2 Spirit left the ground.

Within seconds, water in the sensors caused the $1.2 billion bomber to spiral out of the control of Grieve, who was flying in the mission command seat, and pilot Maj. Ryan Link. They were on their way back to the 509th Bomb Wing, home of the B-2 bomber at Whiteman Air Force Base, Mo.

The plane was 30 feet off the ground when the left wing struck the runway and Grieve made the fateful move to eject &#8212; a function that works simultaneously for both pilots during take-off.

After rocketing 100 feet into the air, Grieve hit the ground with a thud. The bomber exploded just 50 yards from where he landed &#8212; the most costly loss of an Air Force aircraft in history.

It was a move Grieve, 30, believes he made thanks to his background as a flight instructor.

Because of the B-2&#8217;s cutting-edge technology and flawless safety record before the incident, another set of pilots might have perished trying to regain control of the costly jet.

But Grieve, of Bedford, Texas, followed the steps he had doled out on so many occasions to pilots in training: If the plane is going to crash, get out.

"It was a plane and it wasn&#8217;t working right," said Grieve. "I think that mentality saved our lives."

Ryan survived with only minor injuries, but Grieve broke his back and spent the better part of four months in a back brace, unable to fly or even drive.

He got back into the cockpit for the first time about six weeks ago, a little shaky but far from unnerved.

Moisture trapped in three of the 24 sensors that feed information to the bomber&#8217;s computer system made the plane think it was pointed downward, causing the nose to suddenly jerk upward and out of control, according to an Air Combat Command crash report issued in June.

The report cleared Grieve, Ryan and the maintainers responsible for the bomber of any wrongdoing.

"It was a teary-eyed moment for both of us," said Grieve, who gave Simmons the Air Force coin he was carrying during the crash. After their meeting, Simmons, 24, asked Grieve to act as her re-enlistment officer.

"It was really meaningful," said Simmons, 24, by phone from Whiteman Air Force Base. "It&#8217;s something that not many people in my career field ever get to experience. When a plane goes down, everybody usually dies. You don&#8217;t hear about a good ejection very often."

While Grieve, a husband and father of one, considers himself lucky, he doesn&#8217;t think of the incident as a near-death experience.

See a video of the crash at AVweb.com