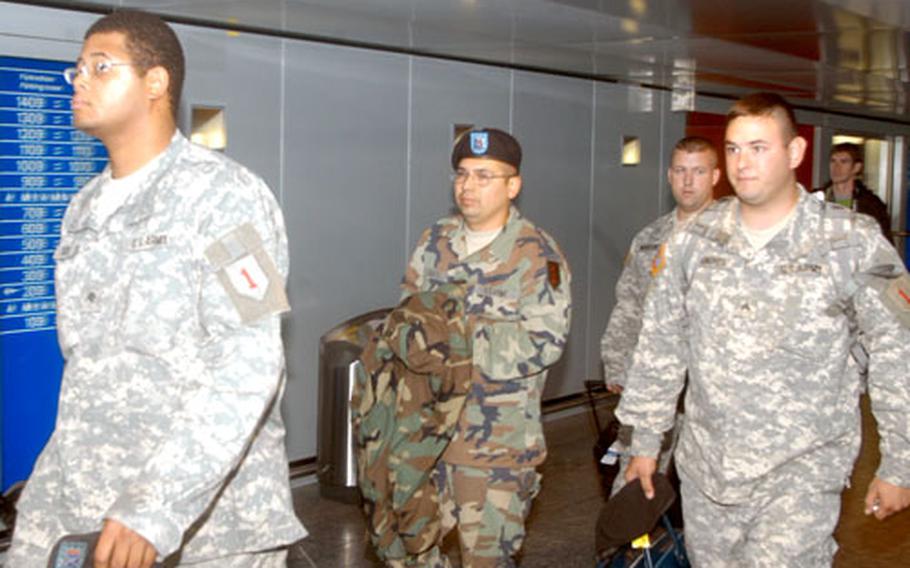 Spc. Agustin Aguayo, center, a medic who surrendered to Army authorities in California last week after going AWOL to avoid a second tour in Iraq, arrived back in Germany on Tuesday. He was escorted by several soldiers as he made his way through Frankfurt International Airport. (Kevin Dougherty / S&S)

FRANKFURT, Germany &#8212; Handcuffed and clad in camouflage fatigues, Army Spc. Agustin Aguayo arrived back in Germany on Tuesday after going absent without leave for 24 days and missing his unit&#8217;s deployment to Iraq.

Aguayo, a professed conscientious objector, was escorted by several uniformed soldiers as he walked through Frankfurt International Airport shortly after the commercial airliner carrying him landed at noon.

The handcuffs fastened to his wrist were obscured by a woodland-style field jacket. Under the coat, Aguayo gripped a small, plastic water bottle.

When asked if he could comment, Aguayo indicated that he couldn&#8217;t.

Several supporters were on hand to observe the 34-year-old combat veteran&#8217;s return, including members of the Military Counseling Network, an independent advocacy group for U.S. soldiers based in Europe. Airport commuters who noticed the procession looked on with puzzled expressions.

Aguayo surrendered to Army authorities at Fort Irwin National Training Center in California last week. Reared in Southern California, Aguayo sought sanctuary there after slipping away from his home base in Schweinfurt, Germany, on Sept. 2, the day after his unit began leaving for Iraq.

The Army could charge Aguayo, a medic for the 1st Battalion, 18th Infantry Regiment, with being AWOL and with missing a unit movement. Civilian attorneys for Aguayo have said that similar situations involving soldiers making similar claims have led to jail sentences ranging from a couple of months to a couple of years, as well as a bad-conduct discharge.

Aguayo was taken from the Frankfurt airport to the U.S. Army Confinement Facility-Europe in Mannheim, Germany, where he will be in pretrial confinement while Army officials review the evidence to determine the status of his case, according to 1st Armored Division spokesman Maj. Wayne Marotto.

Aguayo joined the Army for four years in late 2002 under the delayed entry program, according to his wife, Helga. He went to boot camp in January 2003 and eventually deployed to Iraq in February 2004, where he served a year with his unit in Tikrit.

In the months leading up to his first deployment to Iraq, Aguayo came to view himself as a conscientious objector, his wife has said. He applied for conscientious objector status in early 2004 and served with his unit in Iraq while waiting for his request to be processed. Aside from his regular duties as a medic, Aguayo pulled guard duty and went on patrols, his wife said. When he did, however, it was usually, if not always, without a loaded gun.

The Army ultimately rejected Aguayo&#8217;s application, but he appealed and continued to maintain he fit the definition even after his unit returned from Iraq in February 2005. The matter is currently before the U.S. Court of Appeals for the Federal Circuit in Washington, D.C.

Supporters have maintained from the onset that Aguayo turned himself in to Schweinfurt military police on Sept. 2 with no intention of going AWOL. However, Aguayo went AWOL later that day, they said, because he was told by his superiors that he would deploy to Iraq regardless of his beliefs, even if that meant boarding a transport plane in handcuffs.

On Tuesday, the handcuffs were on, only Aguayo was stepping off of a commercial plane instead of stepping onto a military transport.