Awase Meadows to be site of Okinawa's largest shopping mall 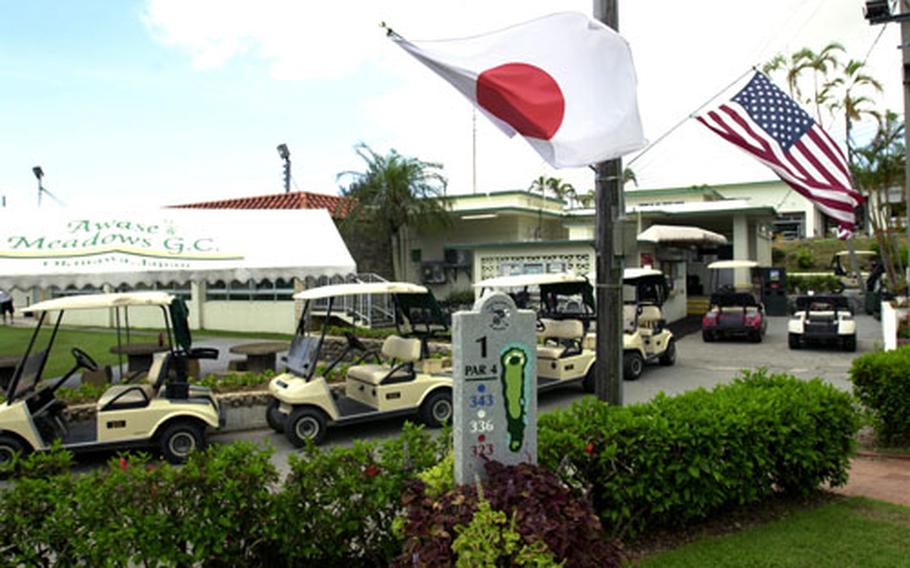 The Marine Corps’ Awase Meadows Golf Course is scheduled to close in 2009 and will likely be turned into Okinawa’s largest shopping mall. (Cindy Fisher / S&S)

NAKAGUSUKU, Okinawa &#8212; In a couple of years, shopping for bargains will be par for the course at Awase Meadows.

The mayor of Kitanakagusuku, host community for the Marine Corps Community Services-operated course, announced that a three-story Jusco mall with 150 to 200 shops, a movie theater and a hospital will be built on what once were some of Okinawa&#8217;s most scenic fairways. Shigeru Ota, assistant chief of Nakagusuku Village&#8217;s Planning and Development Division, said the ground-floor area will cover about half of the golf course property.

The golf course is scheduled to close in 2009 once a replacement course is built on land now part of the Kadena Ammunition Storage Area in Okinawa City. The United States and Japan agreed in 1996 to return the golf course on the condition it be replaced by a similar complex.

The new golf course should be completed by March 2009, said a spokesman for the Naha Bureau of the Defense Facilities Administration Agency, which provides and manages land and facilities for U.S. Forces in Japan. The relocation process began in 2004.

The new course will be an 18-hole, par-72 course with a 241-yard driving range, a putting green, a two-story clubhouse, a pro shop and other facilities, according to a DFAA environmental impact assessment.

Ota said the new shopping complex will be operated by Aeon Mall Corp., which expects the shopping center to rake in $263 million in annual sales from 40 million shoppers. The mall is expected to provide jobs for about 2,800 people, he said.

&#8220;If the golf course is successfully converted into a shopping mall, it will become a model case for effective utilization of military land on Okinawa,&#8221; Ota said.

&#8220;In the past, a tremendous amount of time had been spent before the land could be developed for commercial activities,&#8221; he said, citing the case of the former Makiminato Housing Area, near Camp Kinser, which took nearly 20 years to transform into today&#8217;s bustling shopping district.

Shigenobu Higa, who represents the 334 landowners of Awase Meadows, said the majority of the landowners are delighted by the new development.

The prefecture remains one of the poorest in the country and has an unemployment rate of 7.7 percent, almost twice the national average.