Awards — and some advice — given out in Afghanistan 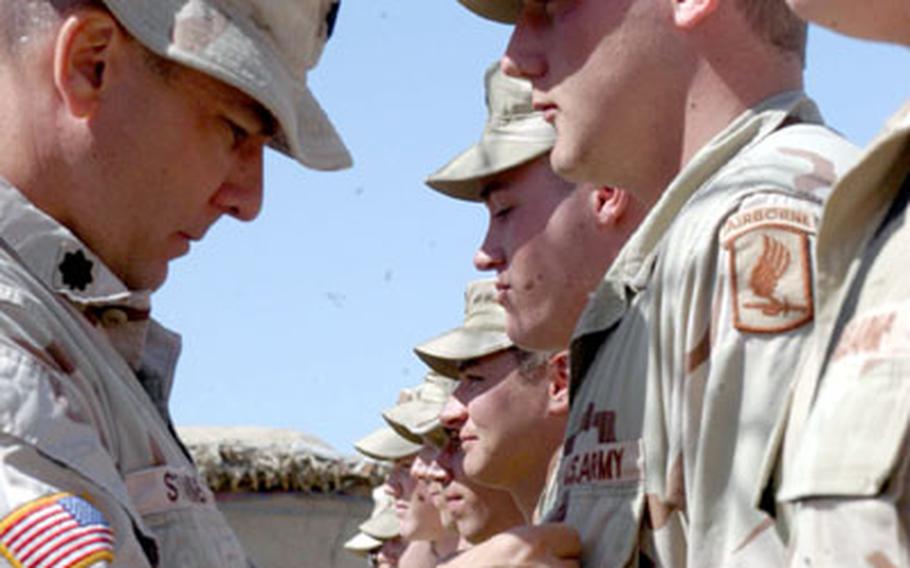 ZABUL PROVINCE, Afghanistan &#8212; Most soldiers from the 2nd Battalion, 503rd Infantry Regiment will return to Vicenza, Italy, with the honors they&#8217;ve earned from Afghanistan already in hand.

They&#8217;ll also take along a little advice on how not to dishonor The Rock back at their home station.

Lt. Col. Mark Stammer, the battalion commander, and Command Sgt. Maj. Bradley Meyers made a swing through the last of about a dozen operating bases in the province Friday to hand out awards and words of wisdom for the battalion&#8217;s impending return to Italy.

On Friday, it was Company A&#8217;s turn. Stammer and Meyers traveled by helicopter to three forward operating bases that soldiers from the company have called home for the last several months. A handful of soldiers assigned to the battalion&#8217;s Headquarters and Headquarters Company also received medals at the bases. Later in the day, soldiers from Company C were set to get awards at the battalion&#8217;s headquarters, Forward Operating Base Laghman.

&#8220;These are going to be just small tokens to represent what you have done,&#8221; Stammer told soldiers gathered at FOB Sweeney, the first of the three stops.

While soldiers from the battalion engaged in a series of battles in the north of the province in the summer, those stationed in the south have had to deal mainly with roadside bombs. One soldier from Company A was killed and two others severely wounded in such attacks.

Soldiers from the company, along with the 173rd Airborne Brigade&#8217;s Combat Support Company, established two of the bases themselves and enlarged the other one. They supported the building of a road linking Qalat to FOB Sweeney and helped train a battalion of Afghan National Army soldiers.

Both Stammer and Meyers told their troops they have numerous reasons to be proud of their accomplishments. But both cautioned them not to ruin their achievements by violating Army regulations (and Italian laws) on returning to Italy.