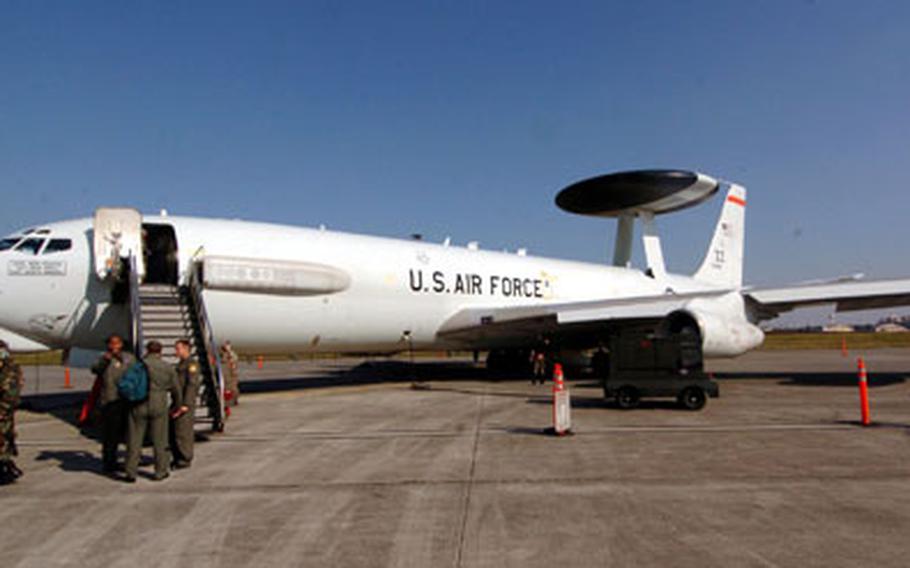 Airmen exit an E-3 Sentry to board a bus at Yokota Airbase, Japan. The radar-domed jet is an airborne warning and control system aircraft, or AWACS. Its crew, assigned to the 961st Airborne Air Control Squadron at Kadena Air Base, Okinawa, is taking part in Keen Sword 2008. (Christopher B. Stoltz / S&S)

YOKOTA AIR BASE, Japan &#8212; That signature rotating radar dome is hard to overlook on the E-3 Sentry, an airborne warning and control system aircraft, more commonly known as AWACS.

An AWACS crew from the 961st Airborne Air Control Squadron at Kadena Air Base, Okinawa, is flying out of Yokota during the massive Keen Sword exercise under way at installations throughout Japan and Okinawa.

The Japan Self-Defense Force and all four branches of the U.S. military are taking part in the 12-day drill, scheduled to end Friday.

The AWACS is providing surveillance, command and control for F-16s from Misawa Air Base, KC-135 tankers and other &#8220;friendly&#8221; aircraft over 10 planned flying days, said Maj. Steve Carson, the 961st squadron operations officer.

The E-3 Sentry&#8217;s radar and computers can gather and distribute detailed battlefield information, which is collected as events unfold.

During Keen Sword, the Kadena crew also is linking up with a Japan AWACS, housed on a newer Boeing 767 airframe. The countries will swap two air weapons officers for each mission of the exercise.

Capt. Jeff Watts, the Kadena squadron&#8217;s project officer and lead planner for Keen Sword, said the AWACS would feed real-time information to &#8220;the four-star running the war on the ground,&#8221; he said.