Aviators from Joint Base Lewis-McChord deploying to Afghanistan 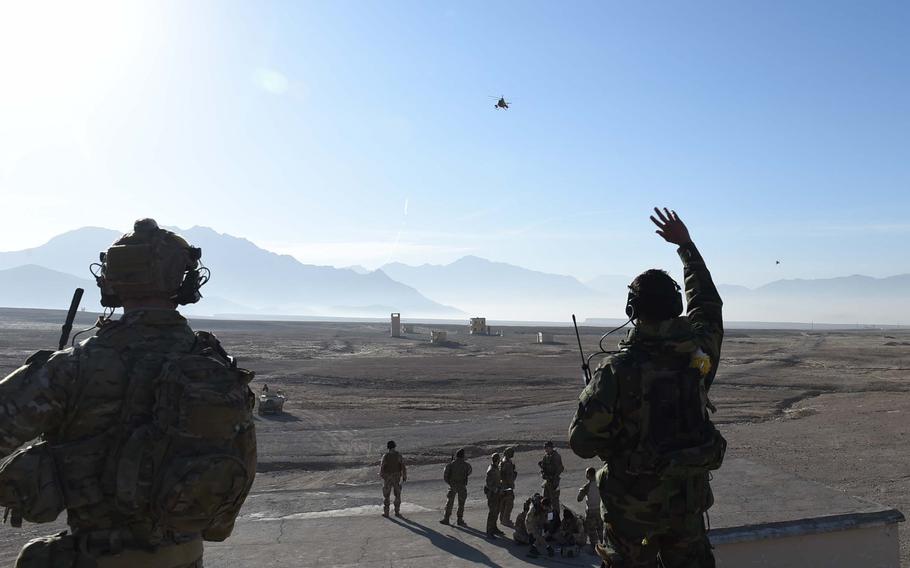 Buy Photo
A student in a training program for Afghan Tactical Air Coordinators waves at an MD-530 attack helicopter during a live-fire exercise at a range south of Kabul, on Dec. 27, 2016. (E.B. Boyd/Stars and Stripes)

WASHINGTON — Some 800 aviation soldiers will soon leave Joint Base Lewis-McChord, Wash., for Afghanistan where they will conduct helicopter-borne operations to assist and train Afghan security forces to help improve their fledgling helicopter force.

The 16th Combat Aviation Brigade, 7th Infantry Division will case its colors in a traditional military ceremony Friday that represents the unit’s preparedness to move into a new theater of operations. The unit will begin conducting “full spectrum aviation operations” in early April, said Lt. Col. Frederick Williams, a spokesman for the division.

The deployment is a regular rotation of troops, replacing the 1st Combat Aviation Brigade, 1st Infantry Division, which has been conducting a variety of attack, assault and medical evacuation operations in eastern Afghanistan since July, according to the Army.

But the 16th Combat Aviation Brigade’s deployment comes just about a month after the top American commander in Afghanistan told lawmakers on Capitol Hill that he needed “several thousand” more troops to properly train the Afghan security forces, who despite improvements have suffered heavy casualties combatting the Taliban. Army Gen. John Nicholson characterized the Afghan-led fight against the insurgent group as “a stalemate” and acknowledged the government has lost some territory in the past year.

He said the troops could come from the United States or any of the other 38 NATO countries that contribute to the campaign.

Nicholson has long pushed for partner nations to contribute more assets – including troops – to the NATO-led training mission called Resolute Support, and a U.S. defense official said Tuesday that the United States would prefer any additional troop deployments come from NATO partners. The official spoke on condition of anonymity because he was not authorized to discuss the issue publicly.

A Pentagon spokesman declined to comment on the U.S. military’s plans for future troop strength in Afghanistan. President Donald Trump has not publicly indicated whether he plans to adjust the American role in Afghanistan, where the United States has been fighting for more than 15 years.

There are roughly 8,400 American troops deployed to Afghanistan supporting Resolute Support and the United States’ unilateral counterterrorism mission, known as Freedom’s Sentinel. Nicholson said in February that he has enough troops to conduct the counterterror mission that targets al-Qaida, the Islamic State group and other organizations in the country designated terrorists by the United States. The Taliban is not officially recognized as a terrorist organization, and operations against that insurgent group are led by the Afghan security forces.

The 16th Combat Aviation Brigade is just one group of American troops expected to rotate into Afghanistan this year. The unit follows some 1,500 soldiers from the 1st Brigade, 1st Armored Division that deployed last month.

The Marine Corps is preparing to send about 300 Marines from the II Marine Expeditionary Force to southern Afghanistan’s Helmand Province in the spring. That will mark the first major rotation in Afghanistan for the Marine Corps since 2014.