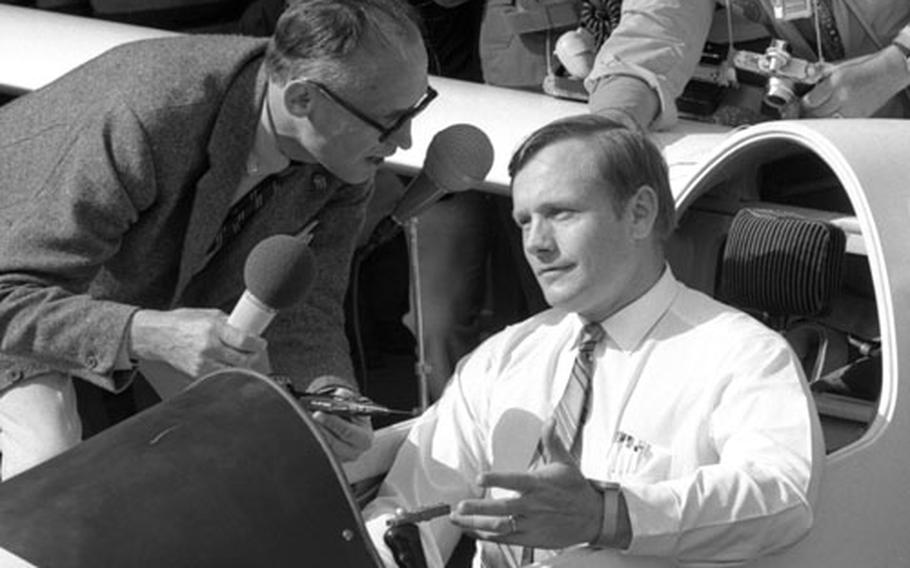 Buy Photo
Neil Armstrong is interviewed while seated in the cockpit of a glider at Gersfeld, Germany, in August, 1970. (John Pilger/Stars and Stripes)

GERSFELD, Germany - On Aug. 9, 1896, in a small town outside Berlin, Otto Lilienthal, called "the father of manned flight" by aviators, was killed while flying one of the earliest gliders.

Pioneering efforts by pilots such as Lilienthal, who made some 2,000 successful flights, captured the imagination of flying enthusiasts all over the world and must have encouraged Orville and Wilbur Wright who demonstrated the possibilities of powered flight at Kitty Hawk, N.C., in 1903.

In 1911, a German flying club made the first manned glider flight off Wasserkuppe, a half-mile-high peak in the Roehn mountain range. The "watershed" peak quickly became a mecca for gliding enthusiasts who flocked here to take advantage of the winds and warm air updrafts that make long glider flights possible.

World War I, which temporarily halted experimentation on the peak, also helped boost the sport to a serious level. The Treaty of Versailles outlawed German powered aircraft, and aeronautical engineers joined the amateurs testing at Wasserkuppe.

The first gliding competition took place in 1920, and the long, thin-winged, fragile-looking, aircraft had to be hauled to the top of the mountain on horse-drawn wagons and launched by men pulling tow ropes.

The world record was set at two minutes, 22 seconds of flight and a distance of nearly 2,000 yards.

Fifteen years, later, when competitors were flying more than 300 miles off the peak, Wasserkuppe had become synonymous around the world with glider flying.

For the 50th anniversary of the first competitive meet, gliding enthusiasts from all over the world gathered to mark the event on the anniversary of Otto Lilienthal's death.

The anniversary was marked by demonstrations of glider stunt flying and skydiving since the "Flyers Mountain" is now only five miles from the East German border.

Attending were aviation pioneers, each a glider enthusiast, who were living proof of the link between flying's origins and its latest accomplishments.

Guest of honor was former astronaut Neil Armstrong, the first man on the moon and a glider pilot for more than 10 years.

Other distinguished guests with years of glider experience included Hannah Reitsch, the German aviatrix-test pilot who first flew a helicopter indoors in Berlin in 1938 and the first operational jet fighter during World War 11.

Also attending was Brig. Gen. Charles (Chuck) Yeager, the first man to break the sound barrier, and now vice-commander of the 17th Air Force. Yeager was also the first commandant of the astronauts training school at Edwards AFB, Calif.