Aviano will be humming with more construction 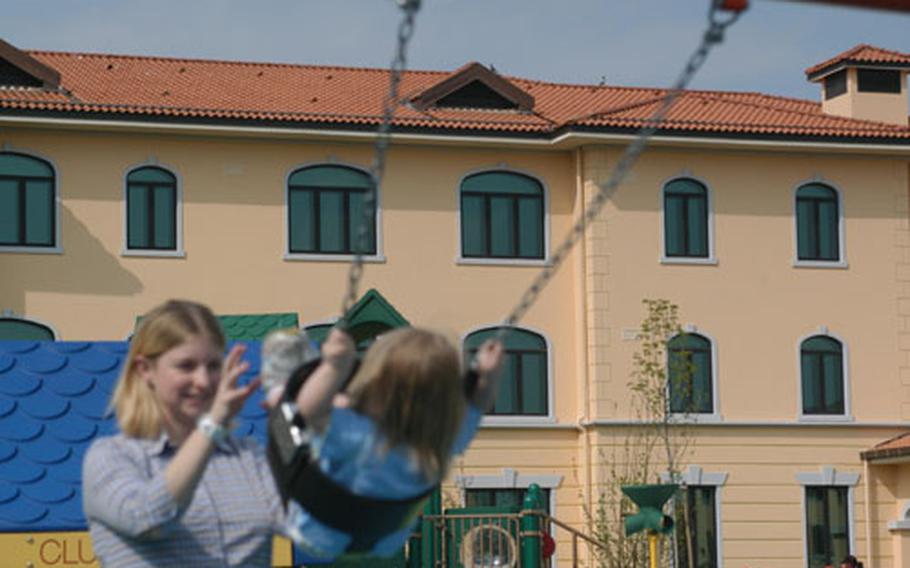 Nicol Gecewich pushes her 2-year-old daughter Kaylie on the swing in a playground surrounded by the four temporary living facility units at Aviano Air Base, Italy. The playground is finished, but the suites — designed to house families processing into and out of the base — won&#39;t be open for a few months. A handful of projects in the $564 million Aviano 2000 construction program are set to open in the fall. (Kent Harris / S&S)

AVIANO AIR BASE, Italy &#8212; At home, neighbors with hammers, drills and saws can be a nuisance. But at places such as this burgeoning military complex in northern Italy, not hearing them can be ominous.

Military officials are hoping for a noisy summer on base &#8212; in addition to the ear-splitting sounds of F-16s taking off.

That&#8217;s because more than a dozen projects in the Aviano 2000 construction program are now set to open by the end of the year.

The program is unusual in many ways. Large-scale NATO funding, for 98 of the projects, is one reason.

Another is the scope.

It&#8217;s one of the largest ongoing military construction projects in the world. Aviano was a small base with only a few hundred personnel when the 31st Fighter Wing landed in 1995. It took a few years to plan and get the funding arranged before the Aviano 2000 project was launched in 1998.

Many of the projects slated to open this year are running behind their initial opening dates, something that has been fairly common among the 287 projects, which carry a price tag of $564 million.

Those comments could be substituted for a range of projects. A shortage of workers is often the chief obstacle faced by the Italian contractors transforming the base. But there are others: construction materials are sometimes delayed; and seven projects are being delayed by another member of NATO, which requires unanimous approval for many of its decisions.

A new consolidated school, base exchange/commissary complex, headquarters building and dormitories are a few of the scores of projects that have been completed. An additional 16 are set to open this year, with 13 more to be finished in 2005. The program has been projected to finish in 2008, although some projects might spill over into 2009.

Polasek, who took over management of the program in March, says patience will be rewarded. And he&#8217;s not talking about four years down the road.

A few facilities should open their doors this summer. This will include two of the four temporary living facility units for families and the operations building for the 510th Fighter Squadron.

There&#8217;s also a much anticipated mini-mall on Area 1 where the base exchange used to be. That building will house a Subway sandwich shop as well as the shoppette, furniture store, tailor shop and dry cleaners that are currently located next to the medical center. Buildings now housing these stores will be demolished, to make way for more parking.

There are still 17 projects in the planning stages and others &#8212; such as the medical center and post office/theater complex and more dormitories &#8212; won&#8217;t be ready this year. Some, such as the new library complex, are contingent on other moves happening first.

Polasek said someone who hasn&#8217;t visited Aviano for a few years wouldn&#8217;t recognize much.

And, for those who have called the base home recently, a lot of familiar sounds.

The Air Force&#8217;s long-anticipated plan to close the road separating Area 1 from Area 2 in Aviano &#8212; effectively consolidating the two bases &#8212; got a big boost this month when four parties signed off on a plan to move forward.

&#8220;The signing is a major trigger point that allowed this to happen,&#8221; said Mike McGhee, chief project manager for the service&#8217;s military construction projects in Aviano, referring to plans that will transform much of the small city&#8217;s traffic flow. It&#8217;s commonly referred to by U.S. officials as the bretella, or bypass project.

The U.S. Air Force, its Italian counterpart, the city of Aviano and the province of Pordenone have been negotiating the issue for more than a year. The Air Force has sought to close the stretch of road.

Security concerns arose when someone &#8212; apparently opposed to U.S. intervention in the Balkans &#8212; lobbed explosive devices over the fence and onto the air base from the road several years ago. No serious damage was done, but it highlighted potential problems caused by public access to the small, narrow stretch that connects the town of Aviano with the hamlet of Pedemonte.

But before the road is closed to traffic, around the summer of 2007 at the earliest, a lot of other work needs to be done.

Modesto Padilla, the project manager, said the Air Force will fund a series of improvements and bypass roads. The result will be a $5 million investment that creates a new gate to the combined area to the south, and pushes traffic for the base in a large counterclockwise loop around the two areas. Many vehicles use the small road that virtually connects the two areas with the larger flight-line area to the southeast, and they&#8217;ll have to take another way when the project is completed.

Other roads will be built to reconnect Pedemonte with Aviano and provide access for the handful of businesses outside the gates that currently use Via Pedemonte.

Padilla said the main driving force behind the project is force protection.

But it also will create better access to the base for the dozens of school buses that drop off and pick up pupils five days a week. It also, in theory, takes into account the city&#8217;s future growth.

Both Padilla and McGhee said the project is a relatively small one monetarily &#8212; especially compared with Aviano 2000 &#8212; but it presents many challenges for planners. One, McGhee said, is &#8220;just the complexity of all the different stakeholders that have parts in it.&#8221;

The first construction contract could be out for bid as early as August, but the project probably won&#8217;t be completed until 2008 or 2009.