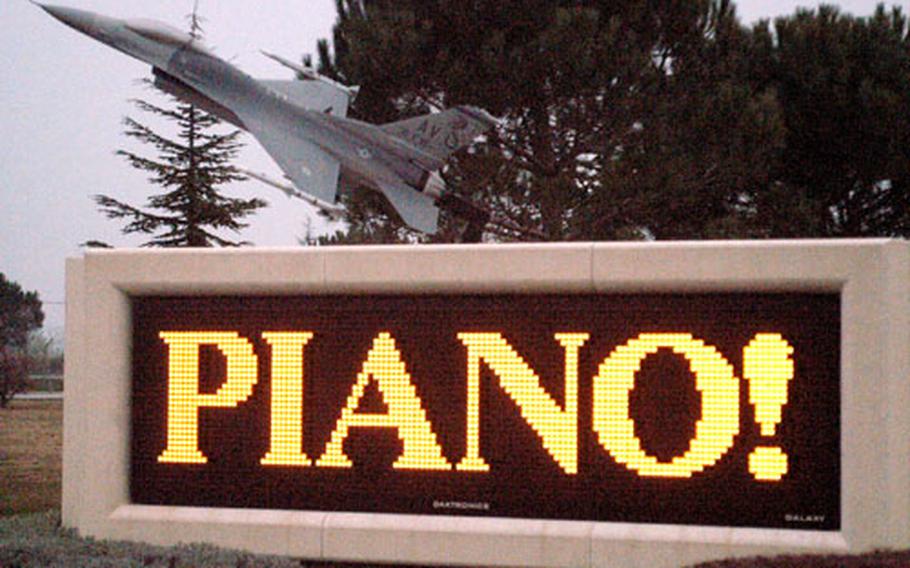 This sign at the entrance to Aviano Air Base isn’t referring to a musical instrument. Piano means “slow” in Italian, and base officials want those stationed in northeastern Italy to drive that way. (Kent Harris / S&S)

AVIANO AIR BASE, Italy &#8212; The 31st Fighter Wing commander believes there&#8217;s a big difference from being comfortable behind the wheel and being too comfortable.

So Brig. Gen. Robert Yates has decided that all airmen under his command &#8212; and their spouses &#8212; need to take annual written tests to keep Italian driving regulations fresh in their minds.

Yates said statistics kept by the wing indicate that newcomers and those who have been at Aviano for a few years have the highest percentage of accidents. As in other military communities in Italy such as Vicenza and Naples, newcomers have to pass tests to get their license to drive in Italy. But up until now, that&#8217;s the only time they&#8217;ve had to take the test.

He said he believes that many of those who have been at Aviano for a while need to re-focus: &#8220;They get complacent or they kind of forget [the rules].&#8221;

Driving around Aviano can be challenging. The nearby SS-13 highway has been labeled one of the most dangerous in Italy. Narrow roads often bordered by buildings or ditches, a few regulations that differ from those in the States, and aggressive driving techniques practiced by Italians don&#8217;t help.

According to Tech. Sgt. Abraham Malit, noncommissioned officer in charge of ground safety, there were 157 major vehicle accidents involving Americans in the fiscal year that ended in September.

Since October, Americans have been involved in more than two dozen major accidents, ones that involve injuries or at least one vehicle can&#8217;t be driven away.

He said the number of minor accidents hasn&#8217;t been compiled, but that number has topped more than 700 a year since the wing stood up in Aviano in the mid-1990s.

Yates, who has touted a &#8220;War Against Risk&#8221; in numerous speeches and AFN commercials, said the tests will be given at the squadron level.

A mix of mass briefings and smaller settings is expected. Those taking the tests won&#8217;t have to get a specific number of questions right. But the tests will be reviewed, with individuals getting the correct answers for the questions they got wrong.