Aviano thanks base guardians as Puerto Rican guardsmen head home 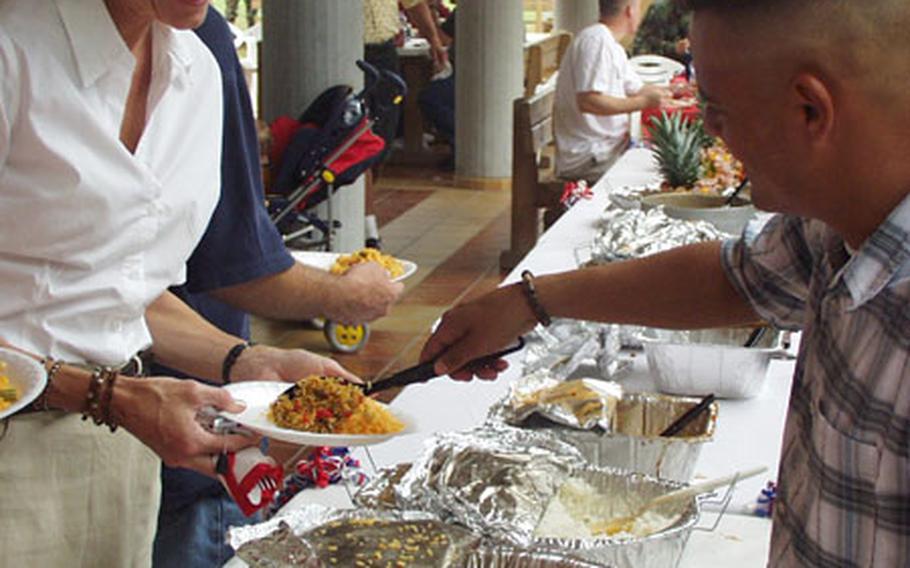 Members of the Aviano Air Base, Italy, military community sample some traditional dishes from Puerto Rico on Friday during the base&#39;s day-long tribute to the National Guard unit that has provided security for the past six months. (Kent Harris / S&S)

AVIANO, Italy &#8212; They&#8217;ve been guarding the gates at selected American military bases in Germany, the United Kingdom and Italy for more than six months.

But not before commands across the continent have an opportunity to say thanks. Friday was Aviano Air Base&#8217;s turn. The base threw a daylong party for the soldiers who have been activated for almost a year now.

That got a few laughs from the Puerto Ricans, who probably could have passed for U.S. Air Force personnel to those who didn&#8217;t pay too much attention to the uniforms. They also could have passed for Italians to some not as well versed in the local language. Visitors to the gates could often hear them conversing with their Italian air force counterparts in languages other than English.

Capt. Zoilo Lopez, commander of Battery A, which was assigned to Aviano, said his unit had a lot of questions heading into the deployment.

What did happen, according to the battery&#8217;s first sergeant, is that the unit gained a lot of experience and saw firsthand how active-duty troops stationed in Europe perform their tasks.

The next stop, though, is Fort Dix, N.J., where the unit will spend a short time before heading back to Puerto Rico. As with other units, the battalion and other units that made up the task force spent a month at the New Jersey base to get trained for duty in Europe before heading over the ocean.

Their living arrangements at Aviano were a bit cramped. But each of them got enough time away from the gates to see a little of Europe.

Minnesota guardsmen to take over security

Military bases in Europe are saying farewell to one National Guard field artillery battalion and hello to another.

Members of the Minnesota National Guard&#8217;s 1st Battalion, 125th Field Artillery Regiment will take on providing extra security at selected bases in Europe for the next six months.

The battalion, headquartered in New Ulm, Minn., is expected to be deployed in Europe until March. Two batteries from the 151st Field Artillery Regiment are also deploying as part of the task force.

The 1st Battalion, 125th Field Artillery Regiment can trace its history to 1887 when the 3rd Regiment of the Minnesota Volunteer Infantry was founded. The unit has grown and shrunk since then and changed name designations several times.

In World War I, the 3rd Regiment was reorganized and the 125th Field Artillery Regiment became a part of the 34th Division. The regiment was the only unit in the division to earn a battle streamer in the conflict.

In World War II, the regiment was redesignated as the 125th Field Artillery Battalion. The battalion fired more than 250,000 rounds of ammunition in 480 days of combat, reportedly more than any other unit of its kind.

The battalion was activated again and sent to Alabama during the Korean War. Decades later, the battalion deployed to South Korea for an exercise. Its participation in Team Spirit 90 was the first time a battalion-size element from the state had been overseas since World War II.

More than 500 soldiers from the task force will provide security at Army and Air Force bases in the United Kingdom, Germany and Italy during their six-month tour in Europe.