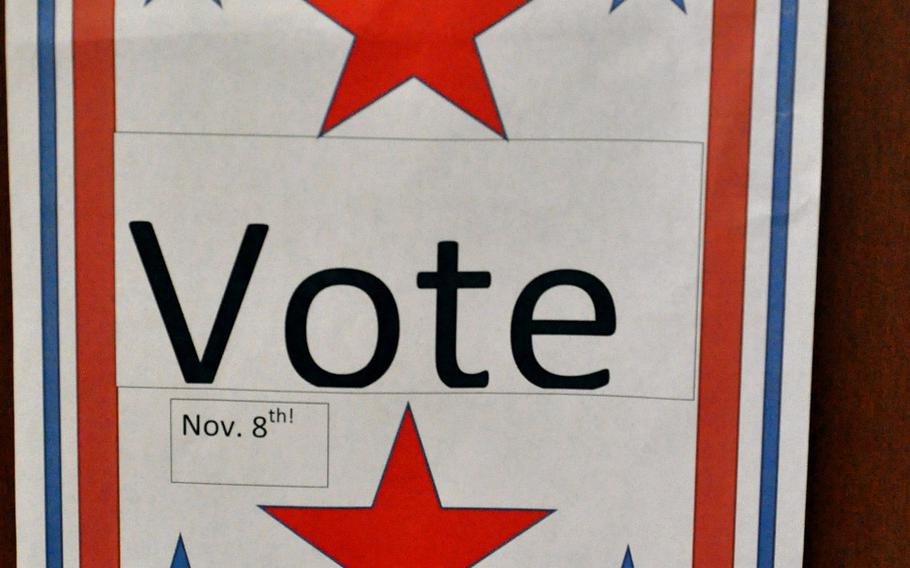 There were signs everywhere in the hallways of the Aviano middle and high schools on Tuesday, Nov. 8, 2016, letting students know that it was election day. (Kent Harris/Stars and Stripes)

There were signs everywhere in the hallways of the Aviano middle and high schools on Tuesday, Nov. 8, 2016, letting students know that it was election day. (Kent Harris/Stars and Stripes) 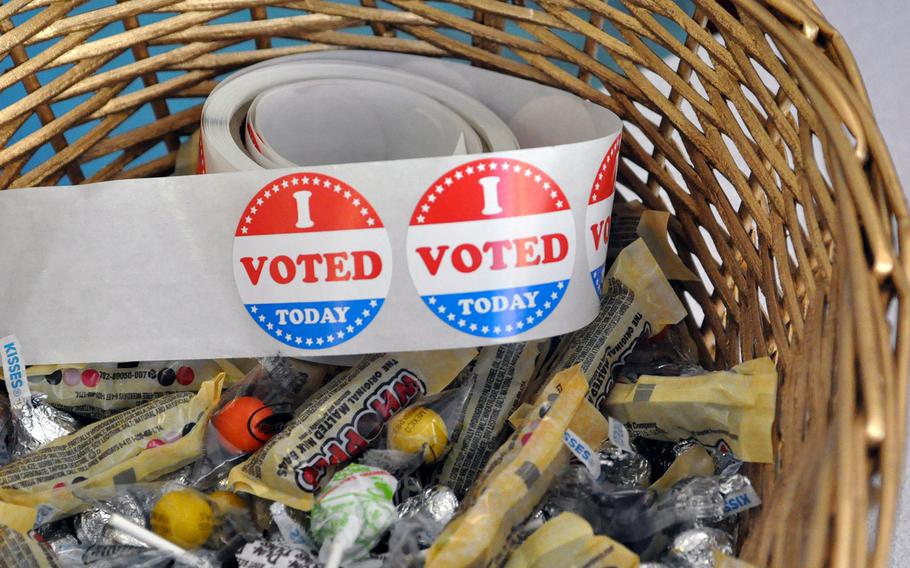 Students who voted at Aviano middle and high schools on Tuesday, Nov.8,2016, not only got a chance to select who they'd like to be the next president of the United States. They also got a sticker and a piece of candy. (Kent Harris/Stars and Stripes) 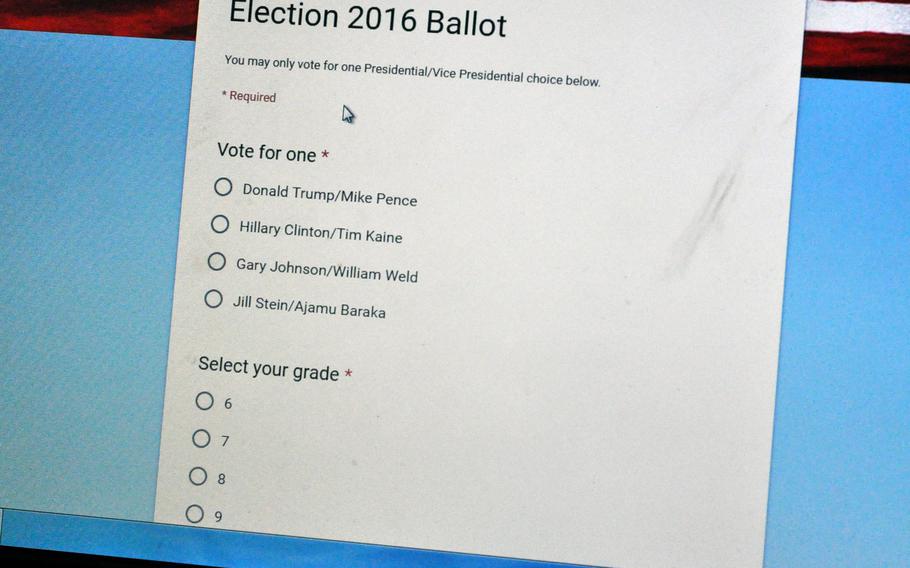 The computerized ballots available at Aviano middle and high schools on Tuesday, Nov.8,2016, were very simple. Four choices for president and sections for them to select their grade and gender. (Kent Harris/Stars and Stripes) 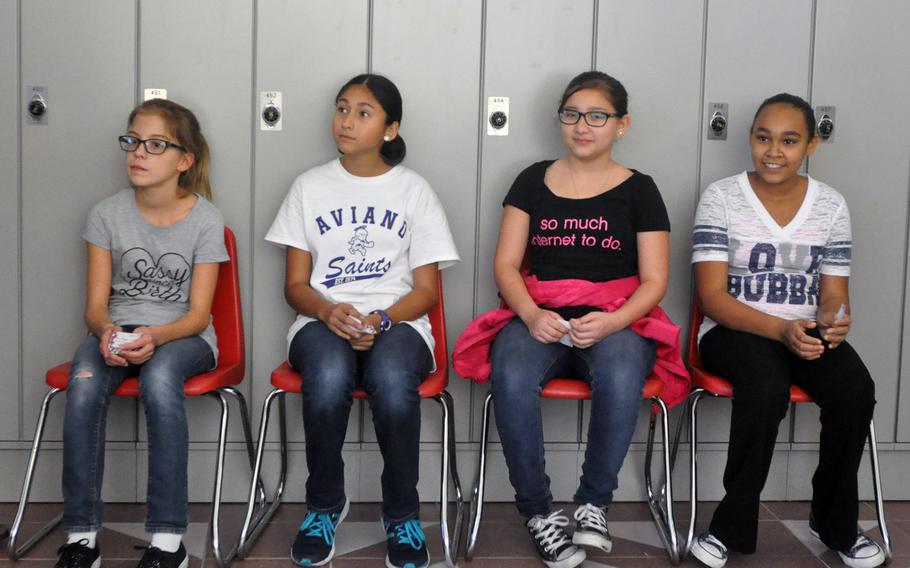 Aviano Middle School students wait their turn to vote during a mock election for U.S. president that took place Tuesday, Nov.8,2016, at the school. (Kent Harris/Stars and Stripes) 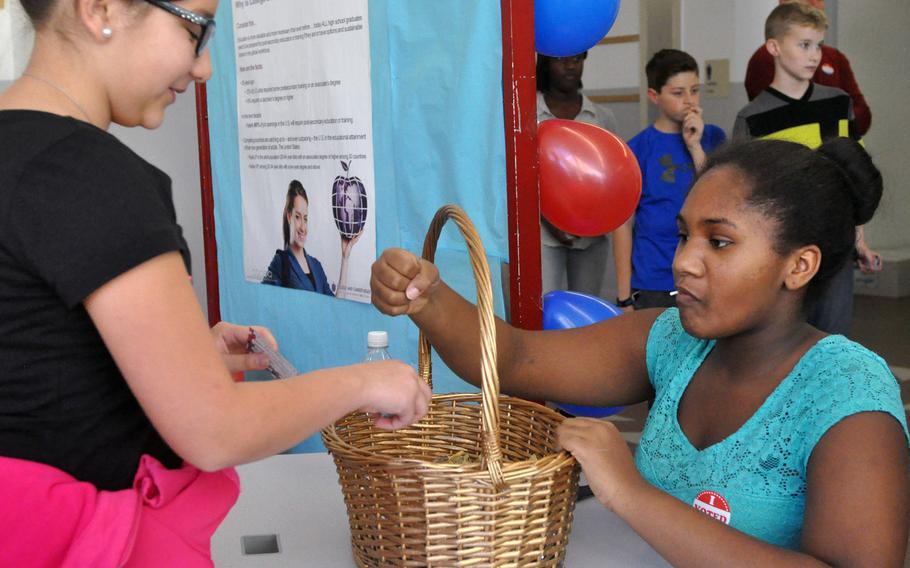 Ariel Agunobi, right, an election monitor, offers a fist bump to Anisa Macias after she voted Tuesday, Nov.8,2016, in a mock election at Aviano Middle School. (Kent Harris/Stars and Stripes) 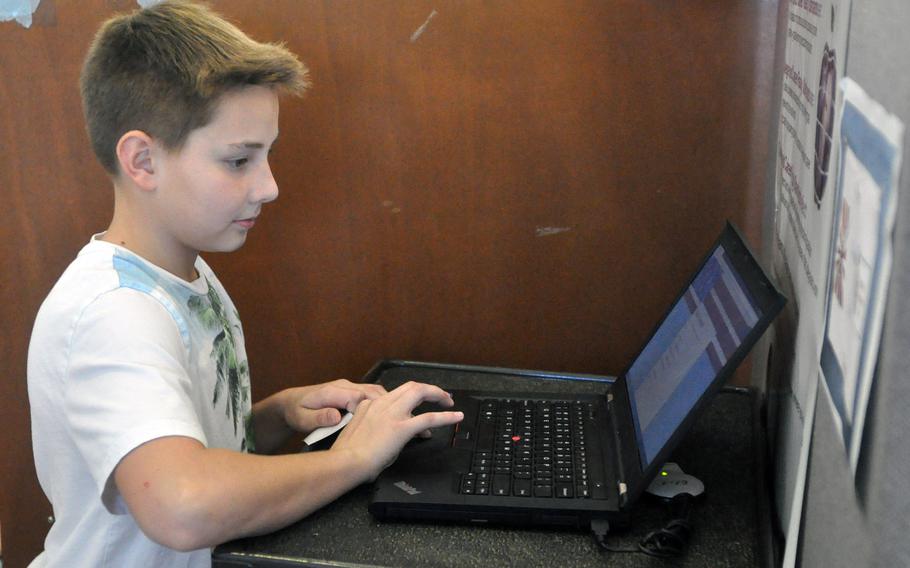 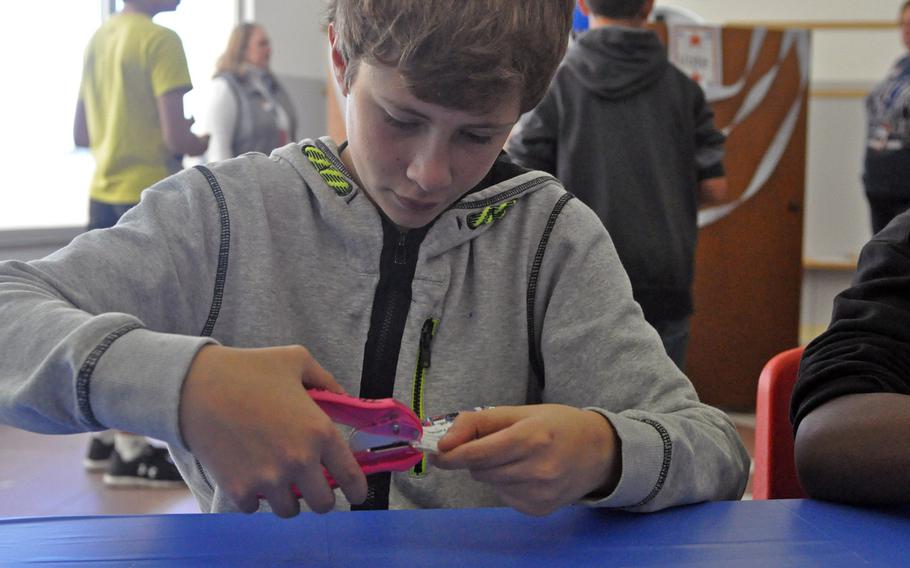 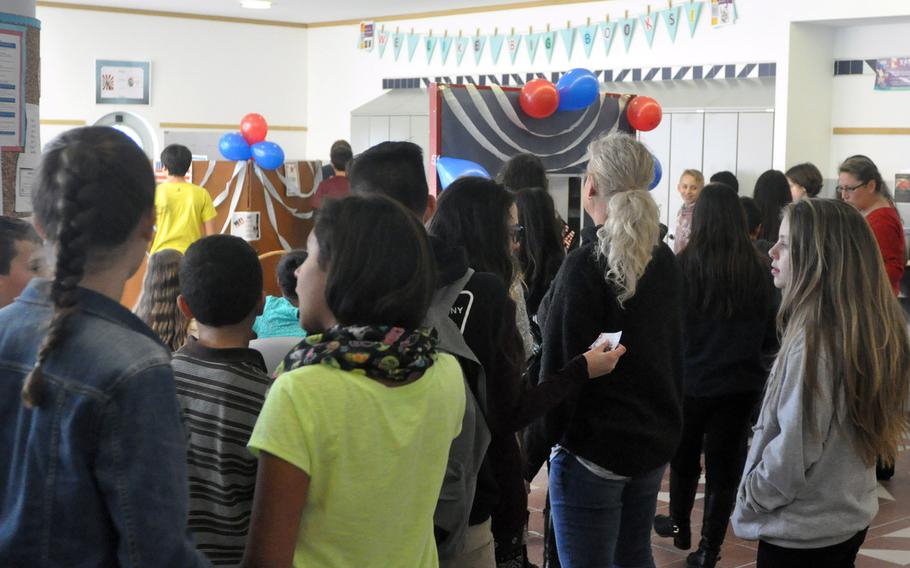 Students stand in line waiting to vote at Aviano Middle School's mock election on Tuesday, Nov.8,2016. Hillary Clinton won the vote at both the middle school and high school. (Kent Harris/Stars and Stripes)

AVIANO AIR BASE, Italy — If the students at Aviano Middle School and Aviano High School had their say, the United States would be electing its first female president.

The Democratic ticket of Hillary Clinton and Tim Kaine earned 78 of the 180 votes cast in a mock election Tuesday, with the Republican tandem of Donald Trump and Mike Pence tallying 56.

Of course, the vast majority of students attending the schools on Aviano Air Base don’t have a say in the process. So Tuesday’s vote was more about the process itself.

Students have been following the campaign and learning about the U.S. political system in both schools. They had a chance to register to vote in the mock election for three days during lunch, and were given links to the candidates’ websites.

More than 200 registered, according to Kathleen McNeil, who teaches a current events class at the middle school. A handful of her students served as election monitors, checking voter registration cards, directing prospective voters to the booths and then handing out “I voted today” stickers and a piece of candy to those who cast ballots.

“I think this is worth a million dollars here today,” said teacher Elizabeth Baldwin, indicating her own sticker and the excitement that the process was generating among the students.

Teachers weren’t allowed to vote in the school election, though those who cast absentee ballots sported the stickers. But students from 6th to 12th grades lined up during a single class period in the afternoon and stepped behind booths to anonymously click on their presidential choice via several computers. The setup was simple: click for president, click on grade and click on gender.

Seventh-grader Venezia Padilla is a strong Trump supporter. She said she particularly liked his stance on illegal immigration “which is causing problems in our country.”

Classmate Kayla Lyle also voted for Trump, though she sounded less enthusiastic. “I would have voted for one of the two other candidates (other than Clinton), but I didn’t think they had a chance of winning,” she said.

Jacob Nothsteine designed the registration cards and he picked Clinton. “I really don’t like Donald Trump,” he said.

McNeil said it wasn’t clear how many of the students were echoing their parents’ opinions. “It’s really hard to tell,” she said. “I’m sure some are and some aren’t.”

Senior Deranique Jones, the high school student body president, is one of a handful of students old enough to vote in the real election. She demonstrated some of her political savvy while declining to answer who she voted for in either election.

She said she thought that while younger students would be more likely to echo their parents’ thoughts, older ones might not.

“We definitely have our own convictions. The seniors are graduating and getting ready to go out into the real world. So this election is definitely going to affect us.”