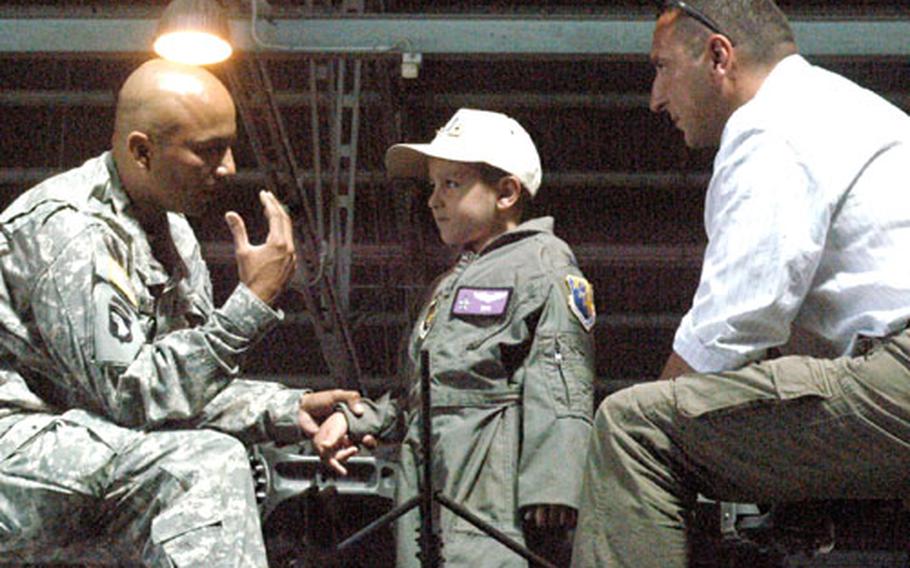 Army 2nd Lt. Jose Marquez explains a few things about the Black Hawk while sitting on top the helicopter with Daniele Montico, 6, and his father, Mauro. (Kent Harris / S&S)

Army 2nd Lt. Jose Marquez explains a few things about the Black Hawk while sitting on top the helicopter with Daniele Montico, 6, and his father, Mauro. (Kent Harris / S&S) Army 2nd Lt. Jose Marquez shows Daniele Montico, 6, how to grip the controls of a Black Hawk helicopter parked Friday in a hangar at Aviano Air Base, Italy. Daniele, who has leukemia, was given a special tour of the base and got the opportunity to see Army and Air Force equipment and vehicles close up. (Kent Harris / S&S)

AVIANO AIR BASE, Italy &#8212; Daniele Montico isn&#8217;t nearly old enough to drive a car. Yet the 6-year-old Italian national got a chance to sit behind the controls of a Black Hawk helicopter and an F-16 fighter jet.

Daniele, diagnosed with leukemia last year, got a special tour of the base Friday and was treated like a VIP by Air Force and Army personnel.

Still, Marquez was obviously moved by the situation.

Daniele&#8217;s dream, seeing U.S. military vehicles up close, came true do to the efforts of the Italian group Libero and coordination with the U.S. Consulate in Milan.

Base officials said they were only too happy to make it happen. Daniele got fitted into a flight suit after arriving on base, then went over to the helicopter that was waiting in Hangar 1.

Marquez, speaking a mix of Spanish and Italian, took Daniele and his family around the helicopter, then they all climbed on and went through the steps of getting ready for lift off. Daniele&#8217;s older brother, Andrea, 9, got a chance to sit next to him as well.

Mauro Montico, Daniele&#8217;s father, is a police inspector in Belluno, a city about an hour&#8217;s drive northwest of Aviano. He said his son was diagnosed with the disease in November and immediately began receiving treatment at a facility in Padova.

The treatment was so severe that he received burns on his right arm that had doctors thinking about amputation. But further specialized treatment saved his arm. He&#8217;s still taking pills daily and will resume chemotherapy treatment in November.

Mauro Montico said a promise that he would get to see American vehicles up close boosted his spirits during the treatments. He called the family&#8217;s reception on base &#8220;very warm.&#8221;

Daniele and his family were scheduled to eat on base, watch F-16s take off, explore the aircraft and meet with Brig. Gen. Craig Franklin, commander of the 31st Fighter Wing, later in the day.