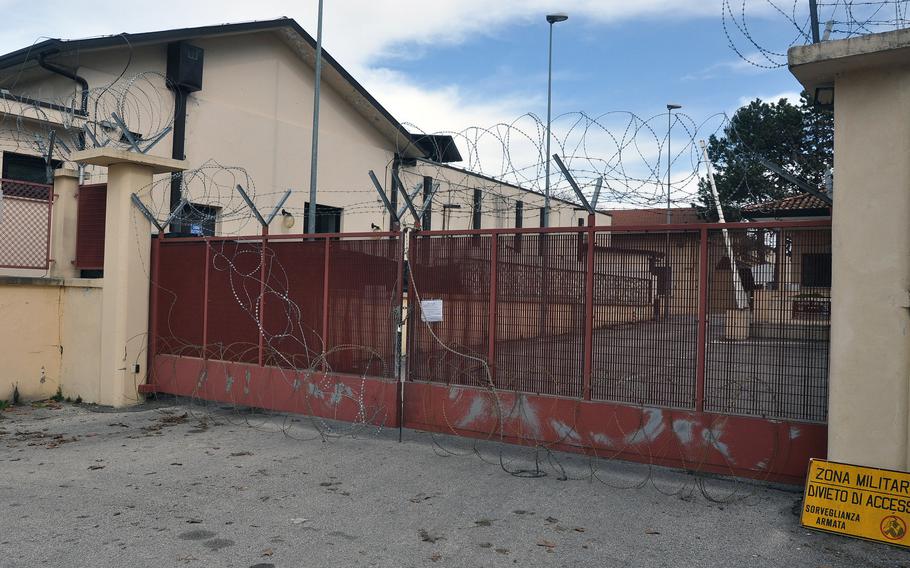 The gate to Area 2 at Aviano Air Base, Italy, has been shut and locked since the start of 2016. The 13-acre compound has been used by Americans for decades, but officials have spent the past few years moving out tenants and working with local authorities on plans to turn the area into a green space. (Kent Harris/Stars and Stripes)

AVIANO AIR BASE, Italy — Thousands of Americans called it home over the years. Since the 1950s, they sweated on treadmills, attended classes, found a good book or a thrift store bargain.

But a 13-acre parcel commonly known as Area 2 might have seen its last Air Force visitor: The gates were closed and locked earlier this year, shortly after the base’s last tenants found space elsewhere.

It is yet to be decided whether the Air Force will return the land to Italy or maintain it for some later use. Current plans envision a green area with some infrastructure still intact. The perimeter fence would remain, and the U.S. would still be responsible for maintaining security.

“That would allow us to possibly re-use it at some point,” Sara Bierman, community planner for the 31st Civil Engineer Squadron, said. She declined to speculate on what uses that might entail.

By then, though, the dozen or so buildings on the site — including a gymnasium, three dormitories and a handful of administrative offices — will have been razed. If the Air Force finds funds, demolition on the dozen or so structures could begin next year, Bierman said.

She said she couldn’t estimate how much the demolition would cost, but overall, the Air Force expects to save around $4 million annually in utilities, maintenance and manpower costs.

Several buildings with various administrative functions were gradually emptied during the last two years as the base remodeled other facilities on the flight line.

The dormitories have been unoccupied for several years, as they were deemed too close to the base perimeter to conform with anti-terrorism regulations that came into effect soon after they were completed.

“This has been a very long process,” Bierman said.