Aviano security devices found to have damaged 2,600 tires so far 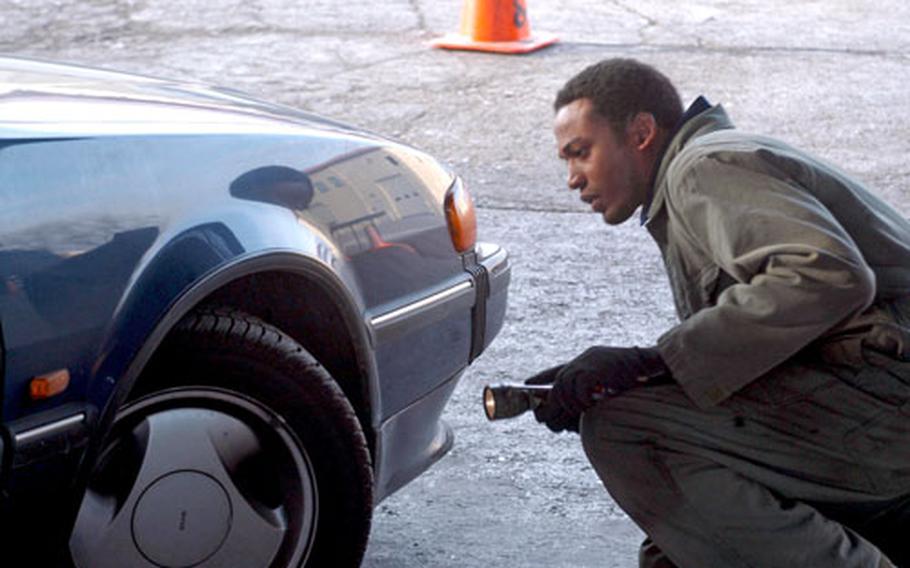 Staff Sgt. Clive Clarke looks at a tire during an inspection by the 31st Logistics Readiness Squadron. Vehicle owners on base were invited to the inspection to see if their tires had been damaged by security devices installed at the gates of Aviano Air Base, Italy. (Kent Harris / S&S)

AVIANO AIR BASE, Italy &#8212; The first round of base-wide vehicle inspections found more than 2,600 tires damaged by security devices installed at the gates.

Inspectors found about 26 percent of the tires inspected in January and early February had substantial damage, according to Col. Scott Chambers, commander of the 31st Mission Support Group. Many were &#8220;just past what we would consider safe limits,&#8221; he said.

About 2,600 vehicles, spread among active-duty, American civilian and local national owners, have been inspected. That&#8217;s about half the vehicles registered on base.

Some vehicles had more than one damaged tire. Some tires showed no damage or only cosmetic damage.

But Chambers said early on in the process, officials realized a trend: The number of damaged tires was higher than expected.

The devices were installed after officials concluded that cars could drive the wrong way through the outgoing lanes to gain unauthorized entry onto base. When activated, the &#8220;shredders&#8221; are designed to puncture a car&#8217;s tires if it drives through the wrong way.

Chambers said other measures are in place, and the devices wouldn&#8217;t likely be used again.

Base leadership, he said, is &#8220;really urging, to the point of insisting, that people get their tires checked.&#8221;

The base population will be notified via e-mail and command channels about another round of inspections for those who haven&#8217;t had tires checked. Meanwhile, those told they have damaged tires are being advised to attend a briefing in the base&#8217;s courtroom, where personnel explain the basics on filing a claim, hand out paperwork and answer questions. The briefings are held at 3:30 p.m. Monday through Thursday.

Maj. Marlesa Scott said a question she won&#8217;t answer is whether or not drivers will be paid for their damaged tires.

&#8220;I can&#8217;t tell people if it&#8217;s likely or not, because until we investigate it, we don&#8217;t know,&#8221; she said. That official investigation might take a month or two to run its course. Claims can be filed in the meantime, though, after an individual sets up an appointment at the legal office.

Some have already been filed.

The Navy, designated military oversight in Italy, will determine if individual claims are merited and possibly pay out money to car owners.

Those whose tires have passed the free inspections, run by the 31st Logistics Readiness Squadron, and still feel they have damaged tires could also have them inspected off base, Scott said. He added that all claims will be reviewed.

Chambers said he wasn&#8217;t aware of any accidents caused by a tire that had been damaged.

He said inspectors have found other problems with tires, such as dry rot, too much inflation or not enough inflation and advised owners to get those problems fixed, as well.