Aviano says Italian plates for all by June 1 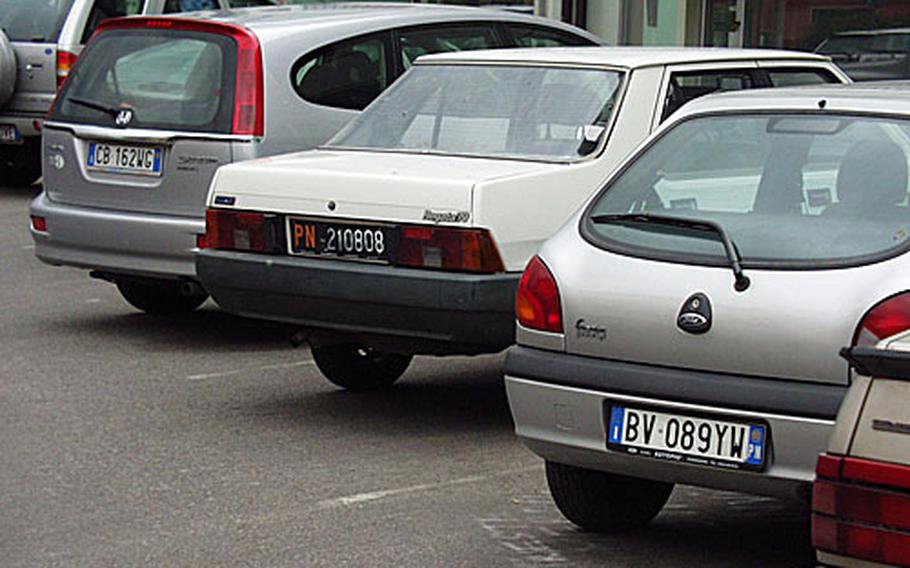 Are these cars parked at a shopping center in Aviano, Italy, owned by Americans or Italians? Most soldiers stationed in Italy are now driving with Italian plates on their vehicles, and Aviano Air Base officials have set a June 1 deadline to have airmen have the plates as well. ()

By the end of the month, it shouldn&#8217;t be possible to spot an American driving in Italy simply by looking at the license plate.

Aviano Air Base has mandated that all vehicles registered on base carry Italian cover plates by June 1, according to a small article in the base newspaper, The Vigileer.

Repeated attempts to get information about the new policy from the base were unsuccessful.

Meanwhile, efforts to convert the plates of all American vehicles registered in Germany are continuing, according to Jack Gillund, a public affairs officer with Installation Management Command-Europe.

&#8220;The original goal was to complete conversion to German plates in two years,&#8221; Gillund said. &#8220;This had to be extended because of the time necessary to generate the money to pay for the conversion costs. All persons will be required to have German plates in the next 18-30 months.&#8221;

Gillund said it would take about $3 million to pay for the conversion, which was supposed to be completed by 2008.

The Army announced the move in September 2005, saying it would affect about 103,000 vehicles registered in Germany.

At the time, plates designated for Americans had telltale two-letter codes and &#8220;USA&#8221; instead of &#8220;D&#8221; in the blue space where initials for the country is designated on European plates. The new plates carry the two-letter city codes that all German residents use.

Americans stationed in England drive with plates identical to those used by British drivers. But Americans can often be easily identified by the fact that their cars&#8217; steering wheels are located on a different side of the car than those driven by British citizens.

Cover plates in Italy have never carried the &#8220;USA&#8221; designation and are identical to those Italians use.

They&#8217;ve been available for Americans in Italy for years. But it once required the vehicle owner to request them, pay an extra fee, and face a wait of several months.

That changed in March 2003 when the Army said it would get rid of the distinctive AFI plates and pay for all its personnel to use the Italian ones.

The Air Force followed soon after and more than 5,000 vehicles registered at Aviano had the new plates by the end of the year. But exceptions were made for those whose cars weren&#8217;t designed to carry the wider plates.

The Navy required all vehicles registered in Naples and Sigonella to have cover plates by June 1, 2004.