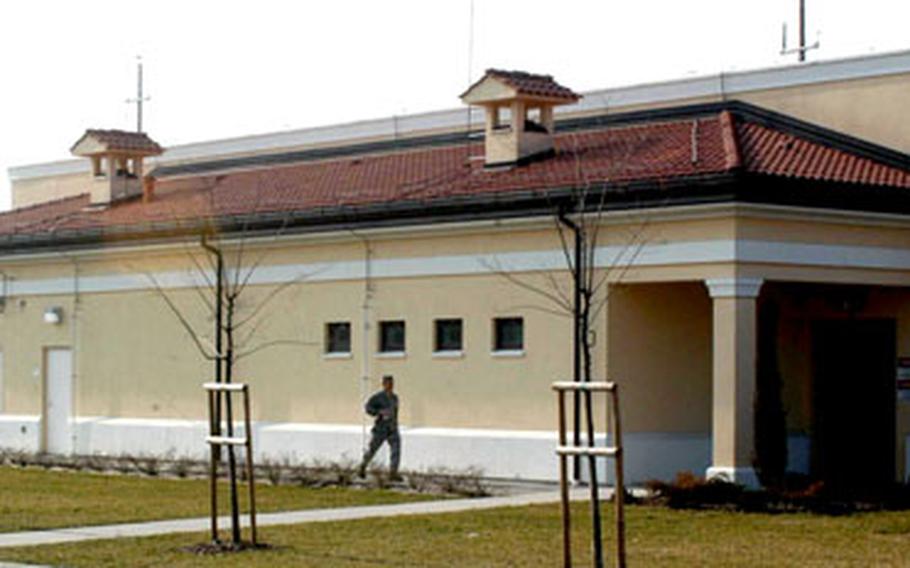 The indoor firing range at Aviano Air Base, Italy, completed in July 2004, has yet to be used. Base officials believe it doesn’t meet Italian safety standards, though a certification team has yet to determine that. (Kent Harris / S&S)

AVIANO AIR BASE, Italy &#8212; An indoor firing range generates considerably less noise than an outdoor one.

But no sound comes out of Aviano&#8217;s indoor facility.

The $2.7 million range was completed and turned over for use in July 2004. Almost five years later, a shot has yet to be fired.

"This is a very high priority on the base and we want to get it up and running as soon as we can," said Lt. Col. Bo Bloomer, commander of the 31st Civil Engineer Squadron. "But we want to do so the right way, under compliance."

Base officials aren&#8217;t sure if the facility meets Italian standards. They&#8217;ve received some indications it probably doesn&#8217;t, but no official word. Bloomer said it&#8217;s up to an Italian inspection team to determine that and the base is waiting for a visit.

The base would then hire a contractor to carry out any adjustments that need to be made. One of Bloomer&#8217;s predecessors on base had previously stated the base hoped to issue such a contract in the fall of 2006.

Those same airmen are the ones who would be using the facility the most, but Bloomer said the base has adjusted.

"Airmen are staying proficient in the meantime," he said, adding that much of that is still being done on the base&#8217;s outdoor firing range on the other side of the runway. Airmen are also using a number of Italian facilities outside the gates.

All U.S. military construction projects in Italy require Italian input and approval before they&#8217;re built. Italian regulations may have changed during the course of the project.

Essentially, the difference between the two countries&#8217; regulations involves the scope of protective padding or other material used to trap rounds. Italian systems are designed to trap rounds and American systems deflect them.

A recent review of the U.S. Army&#8217;s firing range on Caserma Ederle in Vicenza determined that some changes need to be made and they are being carried out, according to Jon Fleshman, public affairs officer for U.S. Army Garrison-Vicenza.

The U.S. Navy base in Sigonella, Sicily, has two shooting facilities available for its troops. An indoor, small-arms range built in 2005 has 10 lanes all facing in the same direction and is equipped to catch rounds, not deflect, said base spokesman Lt. j.g. Matthew Knight.

The base also has a "portable range" built in a trailer that has three small-arms lanes.

The U.S. Navy base in Naples has an on-base, three-lane shooting range at its Capodichino base equipped to catch rounds, meeting Italian standards, said base spokesman Lt. Paul Macapagal. Additionally, U.S. forces in Naples occasionaly use Italian shooting ranges outside its gates.

Bloomer declined to say how long he thought it would be until the Aviano facility is operational. He said it wouldn&#8217;t open until it met Italian specifications and received the proper approval.

Stars and Stripes reporter Sandra Jontz contributed to this report.