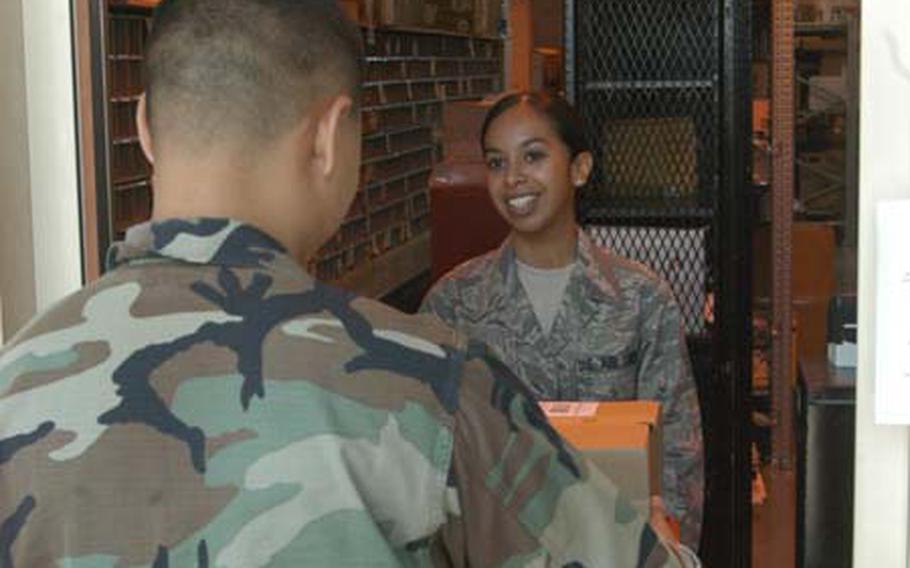 Senior Airman Casandra Franklin delivers a package Friday to Capt. Joseph Rountree at the customer service window at the Aviano Air Base military post office Friday. The base cut back on its customer service hours this month by about 10 percent, citing a need for training. (Kent Harris / S&S)

AVIANO AIR BASE, Italy &#8212; The base&#8217;s military post office has reduced the hours that customers can pick up and mail packages by about 10 percent, citing the need to train personnel and a shortage of airmen due to downrange deployments.

Saatzer said the two dozen airmen assigned to the post office are constantly under orders to deploy to places such as Iraq or Afghanistan. And while larger units might be able to handle having personnel assigned to every Air Expeditionary Force rotation, it&#8217;s a struggle for the Aviano post office.

So customers now have an hour less each weekday to receive or mail packages. And neither one of those functions will be carried out at all on the first and third Wednesdays of every month. Customers, however, will still be able to access their mailboxes around the clock, said 2nd Lt. Rachel Egley, the officer in charge of the section for the 31st Communications Squadron.

Saatzer said people might actually receive letters and magazines a little earlier on the targeted Wednesdays. That&#8217;s because those normally assigned to customer service will join those already sorting the mail to get that task done early so there&#8217;s enough time left in the day for all of them to train.

Saatzer said airmen in his career field now face an array of training, regardless if they go downrange. Under the previous schedule, that training has been neglected &#8212; and the base doesn&#8217;t want to send any airmen who aren&#8217;t fully trained into a combat zone.

Aviano also lost three positions last year during the service&#8217;s efforts to reduce its personnel levels and three more spots are due to be cut next year, Saatzer said.

He acknowledged that he&#8217;s received a few complaints about the shorter hours, but said that base leadership had agreed that the move had to be made.

Aviano is different from many bases in that airmen have to spend several hours each day to travel to Marco Polo airport in Venice to drop off and pick up the mail. Aviano customers send an average of about 19,000 kilograms of mail a month and receive more than three times that much, according to Master Sgt. George Flaig, the postmaster.

Saatzer said that he&#8217;s sure that other post offices are feeling the crunch as well.

The hours will expand again during the holiday season.