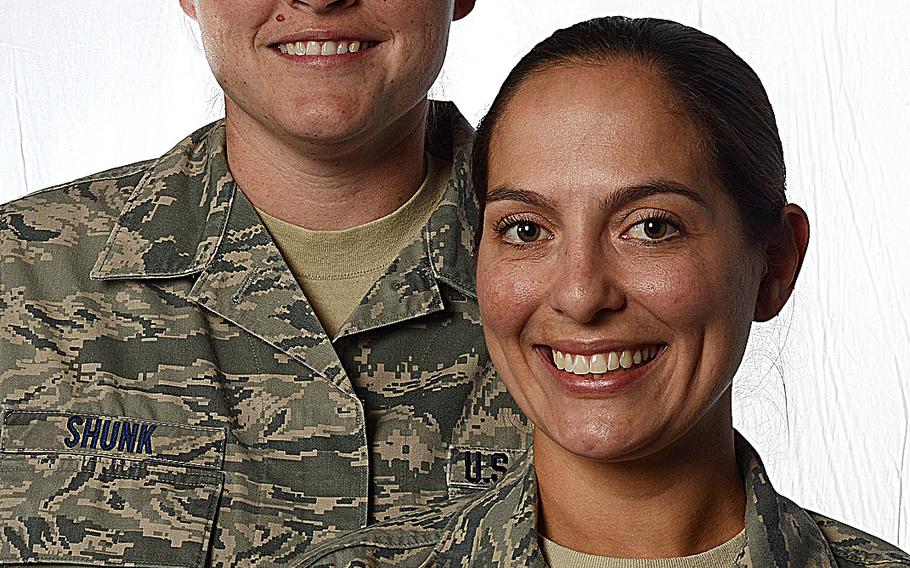 KAISERSLAUTERN, Germany — What a difference a few months can make.

Or, for one Air Force couple, what a difference a historic court ruling for gay rights has made.

Less than three months after the U.S. Supreme Court repealed the Defense of Marriage Act, Master Sgt. Angela Shunk and her wife, Tech. Sgt. Stacey Shunk, received word that the Air Force, after earlier denying their repeated requests for join spouse consideration, was sending them both to Hill Air Force Base, Utah, for their next assignment.

The decision makes the Shunks the first same-sex couple in the Air Force to receive an assignment together under the service’s Join Spouse program since the high court in June struck down the 1996 federal law that defined marriage as a union only between a man and a woman.

Their application for a joint assignment was accepted on the same day they submitted their last application, Sept. 3. That was the first day the Pentagon made a range of federal benefits available to same-sex spouses of members of the military.

“It was really great. We were really excited,” Angela Shunk said in a phone interview this week from Aviano Air Base, Italy, where she and Stacey Shunk are currently assigned. “We’re so happy the process is finally over and we’re going to be stationed at the same location.”

A spokesman with the Air Force Personnel Center said this week that the Air Force has received three applications for a same-sex join spouse assignment and so far approved one.

The Shunks were told theirs was the first application to be approved. An Aviano news release published Thursday confirmed they were the first.

Each branch of the service has programs that try to match military spouses with jobs at the same base. The Air Force doesn’t guarantee join spouse assignment, but will typically accommodate active-duty couples if there are valid staffing needs for both airmen’s career fields at the same location. Same-sex couples weren’t given this consideration prior to the repeal of DOMA because the law prevented U.S. government entities from recognizing their marriages.

For the Shunks, the end of DOMA came almost too late. In May, Stacey Shunk received orders to Hickam Air Force Base, Hawaii, and in July, Angela Shunk learned her next assignment was at Hill Air Force Base. The Air Force first looked at those locations to see if they could find assignments for them both.

“Of course, we were hoping for Hawaii,” Angela Shunk said with a laugh.