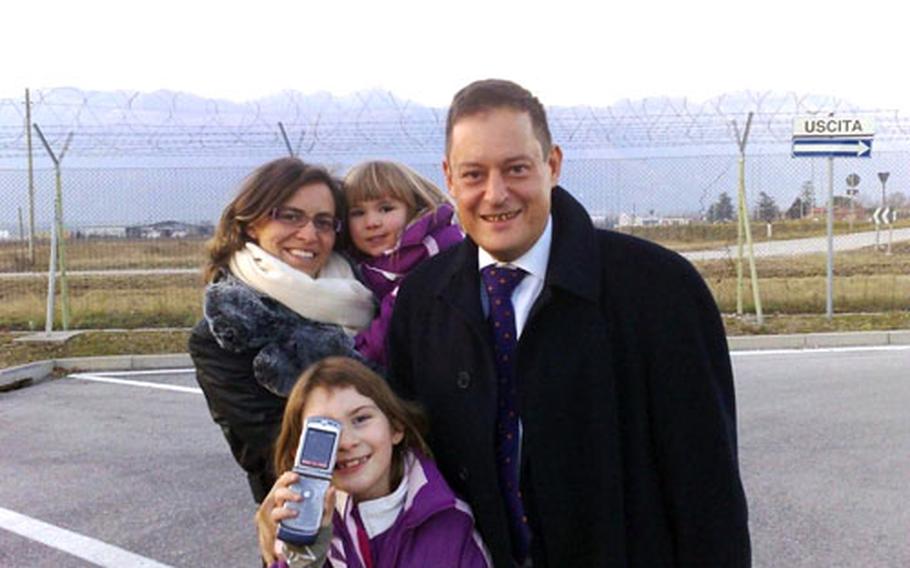 Leighlora, bottom left, and Lillian Ann stand near the entrance to Aviano Air Base, Italy, with Italian lawyers Esmeralda Di Risio and Francesco Furlan shortly after they were released back into the care of their mother on Saturday. Italian authorities had placed the children in Italian foster care and charged Staff Sgt. Kris Wylie with abandoning them while she was deployed. Charges against Wylie have been dropped. Di Risio and Furlan represented Wylie and her Italian fiance in court. (Courtesy Photo / Francesco Furlan)

A staff sergeant assigned to Aviano Air Base and her two daughters have been reunited for the holidays &#8212; but not at their home in Italy.

Italian authorities dropped multiple charges against Kris Wylie and returned Leighlora, 7, and Lillian Ann, 5, to her on Saturday, according to Francesco Furlan, a lawyer based in Pordenone.

Home, in this case, is with Wylie&#8217;s relatives in Minnesota. As part of an agreement with the court, the two girls can&#8217;t live in the same house with Wylie&#8217;s Italian fianc&#233;, Santo Petron, until the case against him is resolved.

Wylie, spending the holidays with her two daughters in Minnesota, could not be reached for comment. She had been charged with abandoning her girls and failing to ensure they were in a safe environment.

Furlan, who represents both Wylie and Petron, said the Italian is still being charged with multiple counts of child abuse.

&#8220;The charges say that, on a couple of occasions, Mr. Petron has beaten the girls,&#8221; Furlan said. His client denies doing that and Furlan said he believes Italian authorities have no evidence to back up the charges. An investigation by the base after the charges first surfaced found no evidence of abuse, Furlan said.

Italian authorities, responding to complaints from neighbors and an anonymous phone call, seized the girls while Wylie was deployed to Bulgaria in October. The two girls, who both speak Italian, are U.S. citizens, and Furlan contends that authorities broke several protocols and agreements by failing to notify U.S. authorities and then placing the girls in Italian foster care.

Furlan said in talks and in several court appearances, prosecutors tried to portray Wylie as an unfit mother because she left her children with her fiance and deployed to other countries. Base authorities have said Wylie filed the proper power of attorney documentation.

Wylie was allowed only limited interaction with her daughters after she returned to Aviano. The two girls were placed in a foster care facility in Portogruaro.

Furlan said neither he nor his client had visited the center &#8212; or even knew where it was &#8212; until the charges against her were dropped.

He said he was satisfied with the care provided to the two girls, but that being away from their mother for two months had caused the girls confusion and their mother anguish.

He said if Petron is eventually cleared, his clients might decide to pursue some legal action against the authorities.

Attempts to contact the prosecutor&#8217;s office in Pordenone on Thursday were not successful.