Evelyne Zedan talks to Beauty, a horse she rescued in November that needed surgery on its eye and mouth. The horse has put on more than 50 pounds since coming to the Zedan Ranch near Aviano Air Base. (Kent Harris / S&S)

Evelyne Zedan talks to Beauty, a horse she rescued in November that needed surgery on its eye and mouth. The horse has put on more than 50 pounds since coming to the Zedan Ranch near Aviano Air Base. (Kent Harris / S&S) 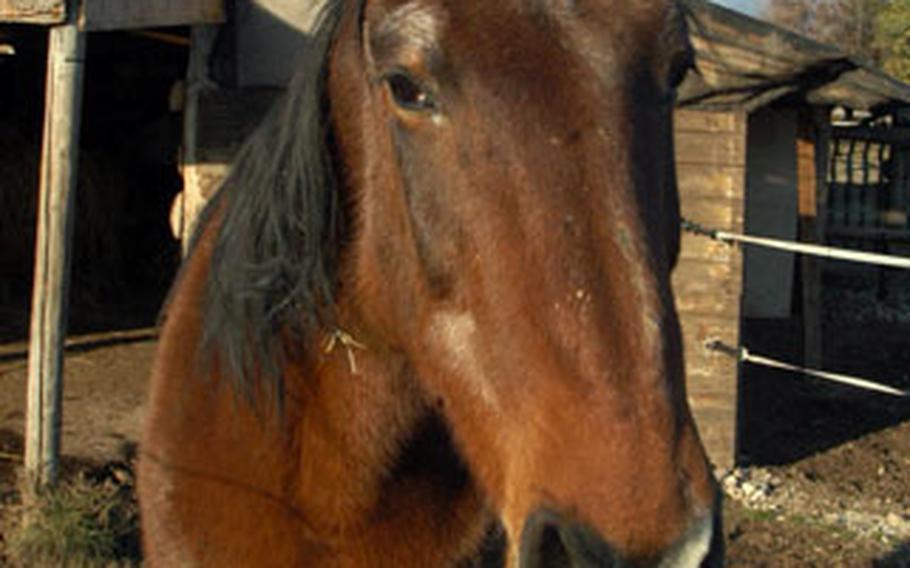 Nonniana is probably one of the oldest horses in Italy. Evelyne Zedan thinks she’s about 40. (Kent Harris / S&S)

MONTEREALE, Italy &#8212; Evelyne Zedan says most of the horses that call her ranch home have been fine companions over the years.

The problem is that horses aren&#8217;t viewed as pets under Italian law, Zedan says, and when they can no longer work, horses often become &#8212; among other things &#8212; sausage and filler for tortellini.

She said she doesn&#8217;t think that&#8217;s the right fate for a horse that has served its human masters for years. But she dismisses the notion that she&#8217;s some kind of radical animal rights&#8217; activist.

Zedan, French by ancestry, grew up in Germany and has lived the last 16 years in Italy.

She first came to know Americans at bases in Germany and interacts with them regularly by offering training and by boarding horses and dogs at her ranch, located about seven miles northeast of the base.

Horses aren&#8217;t cheap to take care of. Zedan charges 250 euros a month to board the animals and says she&#8217;s probably losing some money at that.

And while financial contributions are nice, she&#8217;s mainly looking for someone to come to her ranch occasionally and give the horses some attention.

A dozen of the 17 horses she currently has at the ranch are hers (at least until the right owner decides to adopt), and she can&#8217;t provide enough attention to all of them.

Zedan says most of the horses she has are here because they didn&#8217;t receive enough attention after their usefulness was over.

Several have needed surgery, including Beauty, who came to her in November with puss oozing out an eye and bones showing through its skin.

But Mikki Schattilly, an American volunteer, says the horse has probably put on 50 pounds in less than a month and is showing a lot more energy.

Zedan says her oldest horse, Nonniana, is likely one of the oldest in Italy.

Two veterinarians have said the horse is at least in its late 30s. Zedan thinks she&#8217;s at least 40.

Despite that age, the horse refuses to go into retirement.

Zedan says a young girl currently rides and cares for the horse a few times a week.

When the horse isn&#8217;t being ridden, its back legs swell and it grows restive.

Zedan says she realizes not everyone cares that much about a horse.

But she said there are plenty of nuzzles to go around for those with a little free time.