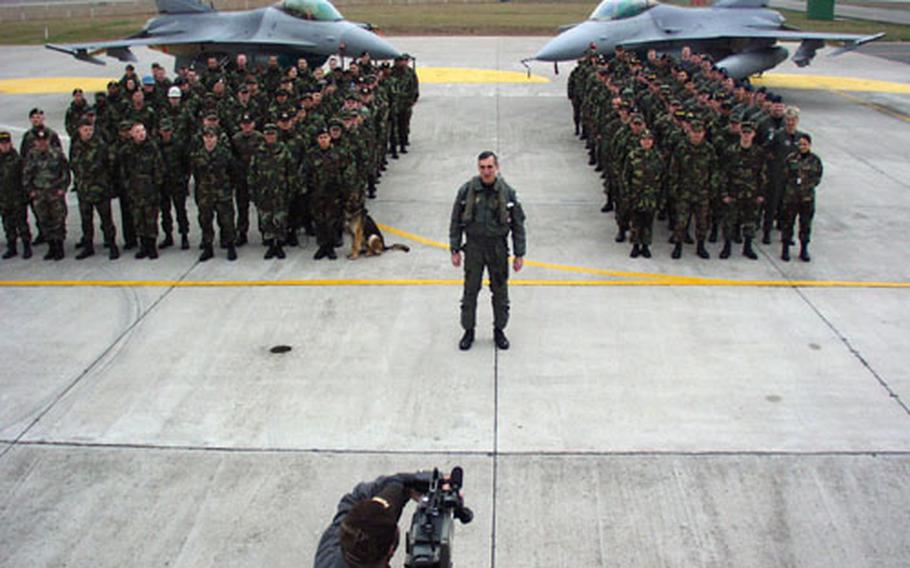 Brig. Gen. Mike Worden, a few hundred men and women (and one dog) of the 31st Fighter Squadron at Aviano Air Base, Italy, tape a message they hope will be broadcast during the telecast of the Super Bowl in January. (Kent Harris / S&S)

Brig. Gen. Mike Worden, a few hundred men and women (and one dog) of the 31st Fighter Squadron at Aviano Air Base, Italy, tape a message they hope will be broadcast during the telecast of the Super Bowl in January. (Kent Harris / S&S) Tech. Sgt. Shawn Sprayberry went 50 feet up to get a shot looking down of servicemembers of Aviano Air Base, Italy, spelling out "31" - for the 31st Fighter Wing. (Kent Harris / S&S)

AVIANO AB, Italy &#8212; The Super Bowl may be a month away, but it was on the minds of a few hundred airmen Friday in Aviano.

The men and women &#8212; and one canine volunteer &#8212; braved the cold and a bit of rain in the hopes of grabbing 15 seconds of fame during the telecast of the National Football League&#8217;s championship game.

They formed the number &#8220;31&#8221; with their bodies in front of a pair of F-16 Fighting Falcons from the 555th Fighter Squadron. The numbers stood for the 31st Fighter Wing, whose commander, Brig. Gen. Mike Worden, did the talking.

He essentially wished those viewing the game well and hoped they were enjoying it.

Worden, who only needed a few takes, came directly to the compound after landing the F-16 he had been flying.

Earlier, Sprayberry had ascended to about 50 feet above the gathering, thanks to the help of a crane from the 31st Civil Engineer Squadron. He got a good angle of those assembled below, asking them to wave to the camera.

He looked a bit worse for wear when he came down.

Aviano was set to forward its submission up the chain this week. Other bases in Europe, and around the world, are expected to film similar spots.

Some of them may be chosen to air during the commercial presentation of the Super Bowl around the globe.