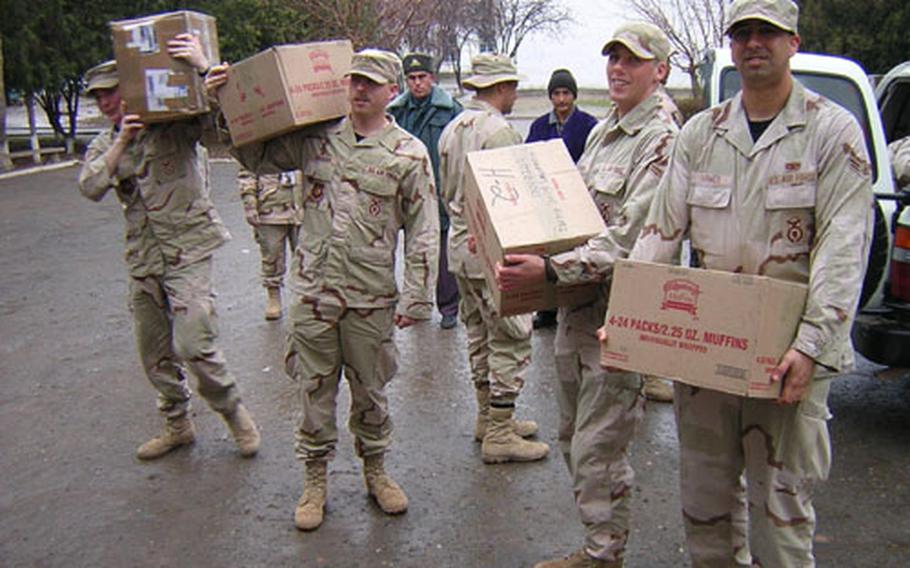 U.S. Air Force members unload donated supplies at a school in Khanabad, Uzbekistan. Students at Aviano High School in Italy solicited donations of school supplies from community members in December. The donations were sent to the former Soviet republic in care of the members of the 31st Security Forces Squadron deployed there. (Courtesy of USAF)

School projects might be a bit more colorful for pupils at a school in Uzbekistan, thanks to the Aviano Air Base community.

Aviano High School students solicited donations of school supplies from community members at the base exchange in December. Then boxes of materials were sent to the former Soviet republic in care of the members of the 31st Security Forces Squadron deployed there.

Master Sgt. Kenn Engelhardt is one of the airmen temporarily based at K2 Air Base. He has three daughters at Aviano High School.

&#8220;He said it was just amazing to see the looks on the kids&#8217; faces,&#8221; Kelli Engelhardt said of the conversation she had with her husband after a visit to the school in Khanabad.

His reaction was probably pretty similar when he discovered how many packages had been sent from Aviano.

Sue Maloney, a high school teacher and adviser for the Future Educators of America chapter at Aviano, said community projects often teach students valuable lessons. So she suggested the project, and about half the group&#8217;s members participated.

The result showed that those who don&#8217;t end up being teachers might want to consider futures in sales: Sixteen boxes of school supplies and two boxes of books were shipped to Uzbekistan. And they weren&#8217;t small boxes.

Students asked shoppers to buy pencils, pens, glue, paper, crayons, scissors and calculators or donate the money to purchase them from the exchange. A flier listed items and prices.

&#8220;Some people were incredibly generous and came back with big bags of stuff,&#8221; Maloney said. In fact, the exchange ran out of some of the items, she said.

Engelhardt, five other airmen from Aviano and two others from Fairchild Air Force Base in California made the deliveries this week to the school, which has about 1,500 pupils.